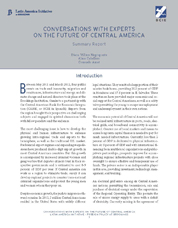 Between May 2011 and March 2012, four public events took place at the Brookings Institution, thanks to a partnership with the Central American Bank for Economic Integration (CABEI, or BCIE in Spanish). They were on:

Experts from the region brought their perspective on challenging subjects and engaged in spirited discussions both with fellow panelists and the audience.

The most challenging issue is how to develop the physical and human infrastructure to enhance growing intra-regional trade and exports to the hemisphere, as well as the traditional U.S. market. Preferential export regimes and expanding maquiladoras have produced double-digit export growth in most Central American countries. But this growth is accompanied by increased criminal violence and gang warfare that depletes citizen’s trust in their respective governments and is estimated to cost 8-9 percent of GDP per year. If Central America can work as a region to stimulate trade, surely it can develop regional projects to counter trans-national criminal organizations and protect the young men and women whom they prey on.

Despite economic growth, the push to migrate northward remains. In 2010, 3 million Central Americans resided in the United States with widely different legal situations. They remitted a large portion of their salaries back home, providing 20.2 percent of GDP in Honduras and 17.5 percent in El Salvador. These remittances have provided major economic and social support for Central Americans, as well as a safety valve permitting the young to escape unemployment and underemployment in their own nations.

The economic potential of Central America will not be realized until infrastructure in ports, roads, electrical grids, and broadband connectivity is accomplished. Greater use of bond markets and means to access long-term capital finance is needed to pay for much needed infrastructure. Currently, less than 2 percent of GDP is dedicated to physical infrastructure. At 5 percent of GDP and with international financing from multilateral organizations and public private partnerships, prospects improve for accomplishing regional infrastructure projects with close oversight to ensure effective and transparent use of funds. The private sector is an indispensable player in this area, providing investment, technology, management, and training.

An electrical grid exists among six Central American nations, permitting the transmission, sale and purchase of electrical energy under the supervision of the Regional Operating Entity. This permits the sale of excess energy supply to areas with a deficit of electricity. Currently missing is the agreement of participating governments to enter into long-term contracts. In 2012, with the extension of the electrical grid to both Mexico and Panama, the private sector has greater incentive to participate in a more robust and larger market with economies of scale. This should benefit an effective regional energy market.

Finally, situated between the Pacific and Atlantic oceans, hurricanes, earthquakes, floods, and volcanoes have led, in recent years, to more than 50,000 deaths and the displacement of over 10 million people in the seven Central American countries. Central America is not to blame for the rise of CO2 because it produces less than 5/1000 of green house gas emissions. However, it bears the brunt of climate change brought about by large industrialized emitters. Regionally, the intensity of climate change-related disasters has increased by 5 percent a year. To meet this challenge, a scientific and technical perspective is needed. Also, governments need to develop comprehensive strategies which take into account tourism, coastal projects, shelter management, and erosion. The creation of Early Warning Systems (EWS) in Guatemala are applauded to bring scientific and management skills to the problems of food shortages, hazardous materials and natural disasters. From national to regional, the EWS demonstrates the need to address the problems of the isthmus at a regional level with outreach to experts from around the world.

This report contains the principal points and conclusions from four events on the politics, and economic and social development of Central America held at the Brookings Institution in partnership with the CABEI in 2011 and 2012. The ideas contained here, although not attributed in the text to individual experts, came from the panelists, moderators and keynote speakers of these events. Their remarks are their own and do not reflect the opinions of CABEI. This report is organized by event and identifies three areas: general overview of the topic, main challenges, and policy recommendations.