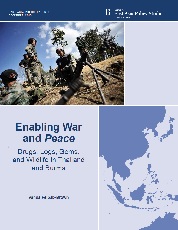 In this policy paper, Vanda Felbab-Brown explores the relationship between conflict, peace dynamics, and drugs and other illicit economies in Thailand and Myanmar/Burma since the 1960s through the current period. In both cases, drugs and other illicit economies fueled insurgencies and ethnic separatism. Yet both Myanmar and Thailand are in different ways (controversial) exemplars of how to suppress conflict in the context of the drugs-conflict nexus. They both show that the central premise of the narcoinsurgency/narcoterrorism conventional approach–in order to defeat militants, bankrupt them by destroying the illicit drug economy on which they rely–was ineffective and counterproductive. At the same time, however, in both Thailand and Myanmar, recent anti-drug policies have either generated new hidden violent social conflict or threaten to unravel the fragile ethnic peace. The leading research finding and policy implications are: While illicit economies fuel conflict, their suppression is often counterproductive for ending conflict and can provoke new forms of conflict. Prioritization and sequencing of government efforts to end conflict and reduce illicit economies is crucial. So is recognizing that suppressing poppy at the cost of exacerbating logging or wildlife trafficking is not an adequate policy outcome.

Learning the right lessons is acutely important for Burma/Myanmar, which, after the overwhelming victory of the National League for Democracy (NLD), led by Aung Sang Suu Kyi in the November 2015 elections, is entering a new political order and a new phase in peace negotiations with ethnic separatist groups. Although the Myanmar military will not give up its influence on the ethnic peace processes, Aung San Suu Kyi and the NLD will become far more involved in the negotations, having drawn important support from the contested ethnic areas allowed to participate in the election. At the same time, the NLD and Suu Kyi (whatever her formal title in the new government will be) will need to carefully structure and calibrate their relationships with external donors and trading partners, such as China and the United States, many of which will seek to shape policies toward drugs and other extractive and illegal economies, including logging, mining, and wildlife trafficking.

Thailand has become a paragon of how to implement alternative livelihoods to wean local populations off of cultivating illicit crops. Yet the strategy’s success was critically enabled by Thailand’s suspension of the eradication of illicit crops while the ethnic insurgency among the poppy-cultivating ethnic minorities was underway. Suspending eradication and thus being able to win the population’s allegiance was crucial. But well-designed, alternative livelihoods only became effective long after violent conflict had ended.

Recently, however, Thailand’s drug policies have been the source of a new kind of violent conflict: In early 2003, Prime Minister Thaksin Shinawatra launched a zero-tolerance “war on drugs.” In addition to many arrested, an estimated 3,000 people were killed during the “war.” A new phase of the war is currently underway, resulting in the arrest of almost 285,000 people in 2015 alone. As before, this war on drugs is counterproductive when it comes to addressing the threats and harms posed by drug use and the drug trade. It also violates human rights. It should not be seen by either Thai society or the international community as legitimizing the military junta that seized power in 2014.

Burma is yet another case where laissez-faire policies toward illicit economies were central to the government’s ability to reduce and suspend military conflict. However, the policies adopted in Burma provide a new twist on laissez-faire: in that it was not used by the government to win the hearts and minds of the population, but rather to buy off and co-opt the belligerents and the traffickers themselves. Indeed the centerpiece of the ceasefires of the early 1990s was the junta’s acquiescence to the belligerents’ continued trade with any of the goods in their territories – including drugs, minerals, timber, and wildlife.

Renegotiating the ethnic ceasefires of the 1990s into permanent negotiated settlements is one of the essential determinants of whether lasting peace is established and Myanmar’s transition from authoritarianism succeeds. Yet it is not clear whether the economic inducements à la the 1990s can any longer be available. First, the international oversight, including China’s, is far more determined to not allow the perpetuation of illicit economies in Myanmar, such as a resurrected poppy economy. Second, many more actors, including Bamar groups and Chinese enterprises, are now intermeshed in a variety of Myanmar’s economies, including illegal logging and land seizure, squeezing out ethnic participants. For many reasons, beyond but including the management of illicit economies and economic interests, some of the peace negotiations are breaking down, and violent conflicts are restarting. At the same time, many of the economies which have underpinned peace and sometimes replaced the opium poppy economies – including logging, mining, and wildlife trafficking – have had devastating environmental effects.

Contrary to the conventional wisdom, suppressing labor-intensive illicit economies does not relieve military conflict, it exacerbates it. Accordingly, the opposite sequencing and prioritization of policy is often required:

• In order to end insurgencies, whether through a victory on the battlefield, by weaning local populations from supporting belligerent groups, or through peace deals that give insurgent groups an economic stake in the peace, governments may have temporarily to tolerate labor-intensive illicit economies, such as drug cultivation.

• However, for such a peace to be both sustainable and satisfactory from a public goods perspective, the social and economic development of former conflict areas will be necessary to prevent undesirable unregulated and illegal economies, such as logging and wildlife trafficking.

• Conversely, for alternative livelihoods programs to be effective in reducing such undesirable economies in a lasting way, good security needs to be established in the rural regions. This means that the ending of military conflict needs to be given priority.

• Alternative livelihoods must address all the structural drivers of illicit economies. They must encompass generation of sufficient employment opportunities, such as through the promotion of high-value high-labor-intensive crops as well as through off-farm income, infrastructure building, distribution of new technologies, marketing help and the development of value-added chains, facilitation of local microcredit, establishment of access to land without the need to participate in the illicit economy, and development of off-farm income opportunities– to name a few of the most prominent components. A combination of purposeful village-level rural development and broad job-generating economic development is necessary.

• They also need to be integrated into overall development strategies, with attention paid to whether overall economic growth produces job creation or capital accumulation while exacerbating inequality. Macroeconomic policies, such as fiscal policies that tax labor heavily and land lightly, might have pronounced, if indirect, effects on the effectiveness of alternative livelihoods policies, and may be expressions of persisting social exclusion.

• Policing and rule of law are indispensable elements of suppressing illegal economies and regulating the legal ones so they are not socially or environmentally destructive. However, for policing and law enforcement to be effective, they often require that local populations do not fundamentally see them as contrary to their human security and hence can be internalized. Thus, providing desirable legal economic alternatives facilitates policing and rule of law.

• However, alternative livelihoods strategies must become far more sensitive to their environmental impacts. Underpinning a peace deal with unrestrained destruction of forests produces at best a highly problematic reduction in conflict. Replacing the drug trade with wildlife trafficking is equally not a good deal. Both can turn an unstable peace into unrestrained plunder.

• Policies addressing drug use should not become new forms of war. Mass incarceration of users and low-level, non-violent pushers does little to suppress—and can exacerbate—the use of illicit drugs. Stigmatizing and punishing users undermines efforts to stem the spread of HIV/AIDS and other communicable diseases. Public health approaches, such as needle-exchanges and safe-injection sites, produce far better policy outcomes and should be adopted.

The relationship between schooling and conflict in Afghanistan

One year after Myanmar’s coup, old and new resistance is undermined by divisions

Don’t give up on Myanmar