The inequality debate is dominated by binary thinking. Scholars typically worry about the gap between rich and poor, the “haves” and “have nots” or – most recently – between “the 99% and the 1%.”

Politicians are always tempted by neat bisections. Often the dyad is between “the many” and “the few.” Obviously enough, the politician in question is always on the side of “the many,” since they have more votes. Those on the right often claim to be on the side of the “hard-working majority” against welfare dependents, or the undeserving poor. Those on the left are also on the side of the hard-working majority, but this time counter-posed against the Wall Street billionaires, or undeserving rich.

“I will measure myself at the end of my Presidency in large part by whether I began the process of rebuilding the middle class and the ladders into the middle class, and reversing the trend toward economic bifurcation in this society.” See, there it is again: what worries the president is the bifurcation of society.

But social and economic cleavages are rarely so neat. Complex, shifting economies and cultures cannot be cut into two portions so readily, at least not without dangerous levels of simplification.

At the very least, recent economic and social trends suggest a trifurcation rather than bifurcation of society, with two consequent divides. At the top, we can see an elite doing well in a labor market offering big returns to human capital. This is perhaps not the just the top 1% (much though politics might be easier if that were so) but, say, the top decile, or 10%, of the income distribution.

This stratum is not only prospering economically. For the people on this top rung, education levels are high and rising. Families are planned, marriages strong, neighborhoods safe and rich in social capital, networks plentiful, BMIs low and savings rates high.

Below this affluent class is a broad swath sometimes dubbed the “squeezed middle.” This group have decent labor market participation rates, but wages that are rising slowly. In many cases, two wages are needed to support the family. They own a home, but are not otherwise wealthy. Savings exist for emergencies or one-off expenditures, but run out fast if the household has a serious downward shock to income. Private schooling is rarely an option, financially. Marriages (This is a group that might benefit from one of the schemes of wage insurances currently being discussed, most recently by Professor Miles Corak.)

At the bottom of the social scale are those whose poverty is entrenched. Labor market attachment is weak, with many people in long-term unemployment. Teen pregnancy is still heard of, unlike in most communities today. Poverty is felt in most domains of life – crime, health, education, parenting, drug addiction and housing. The growing economic segregation of neighborhoods further isolates this group from chances of work, better schooling or valuable social networks. Upward intergenerational mobility rates are low.

There are a number of ways we might track this putative trifurcation. One is to look at income trends. Here is some data recently unveiled on these pages by my colleague Gary Burtless, showing income growth since 1979 across the distribution: 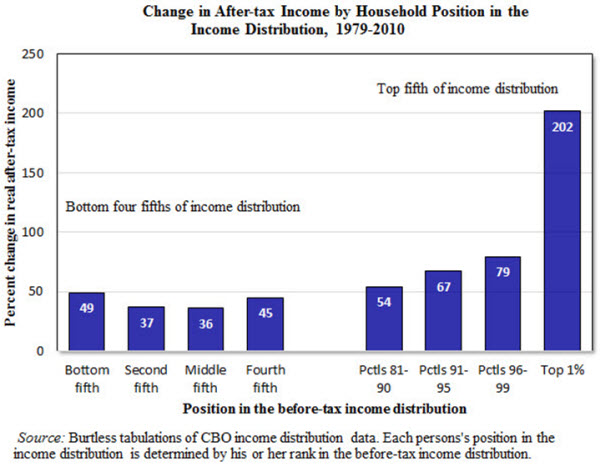 In terms of after-tax income, those at the top have done really well since 1979: that’s perhaps not a surprise. What might be more instructive is the relative performance of the lowest quintile and the middle – ie. a 49% rise compared to a 36% rise. Income growth has clearly been weakest in the middle of the distribution.

Now for something different – though unquestionably related: marriage patterns. Again, there is as much evidence for trifurcation as bifurcation: 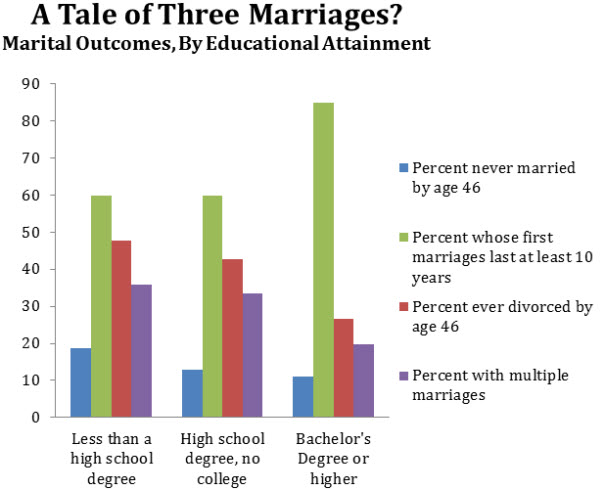 The chances of not getting married, or of getting divorced and possibly remarried, are much higher for those without at least a high school diploma. Meanwhile, college graduates have higher marriage rates and lower divorce rates – and more chance of having a marriage that lasts at least a decade. (I’ve written elsewhere about the rise of elite marriages.)

Of course, data can be cut any number of ways – into two, three, four, five, ten, or a hundred slices. But across a range of dimensions, it probably makes more sense to think in terms of three groups, and two gaps, than in terms of a single divide. Any categorization does statistical violence to the diversity of individual experience. But as a way of thinking about trends in the contemporary United States, trifurcation is almost certainly better than bifurcation.

Why did US jobs growth slow in April?