Should the U.S. put boots on the ground to fight ISIS?

The question at hand: Should the U.S. put boots on the ground to fight ISIS?  Do you have a strong opinion? Can a well-informed debate change your mind?

Arguing in favor of intervention were Michael Doran and Michael O’Hanlon. Arguing against were Senator Chris Murphy (D-Conn) and Jeremy Shapiro.

Learn more about the issue at hand with this reading list. 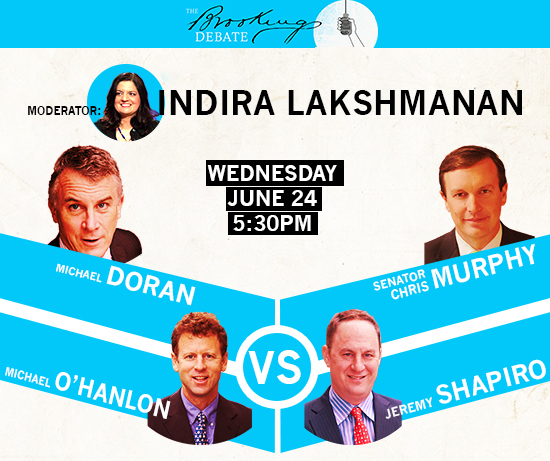 ISIS (aka Islamic State or ISIL) forces continue to hold large swaths of western Iraq and portions of Syria. Although some of the gains made by ISIS fighters last year have been rolled back over the past few months, the recent museum attack in Tunisia and the pledge of allegiance from Nigeria’s Boko Haram group show their ideological reach now extends across the world.

Americans have been wary of another war in the Middle East, but opinion polls show that more than 50 percent of Americans still support sending U.S. ground troops to fight ISIS. But many key questions must be answered before the president and Congress make any decision to engage ISIS directly:

What threat does the self-declared caliphate pose to the region, the U.S., and the world? Is the current U.S. response, and that of regional players such as Jordan, Iraq, and Iran, adequate to combat the threat? Is ISIS merely a distraction from other important matters in the region, such as the Syrian civil war, Iran’s nuclear program, and Israeli-Palestinian relations? Is the current approach of tactical airstrikes enough to drive ISIS out of key areas in the region?

On Wednesday, June 24, experts presented both sides of the case and had a lively discussion over the question of the night: “Should the U.S. deploy ‘boots on the ground’ to fight ISIS?”