Two key examples are autism spectrum disorders and vascular birthmark issues, which together affect over two million Americans. Most treatments for these health problems are not covered by most health insurance plans in the United States today. In addition, they disproportionately affect children and if not effectively addressed early, they become lifelong problems, degrading quality of life and in many cases causing huge additional costs down the road.

On October 23, the Brookings Institution hosted a discussion featuring a group of individuals committed to the cause of childhood health care. Panelists included Michael O’Hanlon, Brookings senior fellow and parent of a child on the autism spectrum; Leslie Sinclair, program director of the Center for Autism at the Cleveland Clinic; Nicholas Sparks, bestselling author of The Notebook (Grand Central Publishing, 1999) and Nights in Rodanthe (Warner Books, 2003) and parent of a child with a vascular anomaly; and Dr. Milton Waner, co-founder of the Waner Children’s Vascular Anomaly Foundation. Hannah Storm, ESPN anchor and founder of the Hannah Storm Foundation, provided introductory remarks and will moderated the discussion. 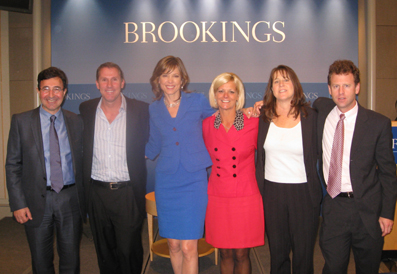 Author, The Notebook and Nights in Rodanthe