This paper is part of the Summer 2020 special edition of the Brookings Papers on Economic Activity, the leading conference series and journal in economics for timely, cutting-edge research about real-world policy issues. The editors are Brookings Nonresident Senior Fellow and Northwestern University Professor of Economics Janice Eberly and Brookings Nonresident Senior Fellow and Harvard University Professor of Economics James Stock. Submit a proposal for future BPEA conferences here.

Most emerging market and developing economies have so far weathered the coronavirus crisis better than expected but nevertheless face daunting long-run economic challenges, suggests a paper discussed at the Brookings Papers on Economic Activity (BPEA) conference on June 25.

Initially, it was feared the disease burden would be much higher in countries with fewer resources—hospital beds, medical equipment, and healthcare workers—to fight the virus. However, at least so far, death rates (deaths per million) have been lower in most developing countries compared with advanced economies, according to The effects of the coronavirus pandemic in emerging market and developing economies: An optimistic preliminary account. 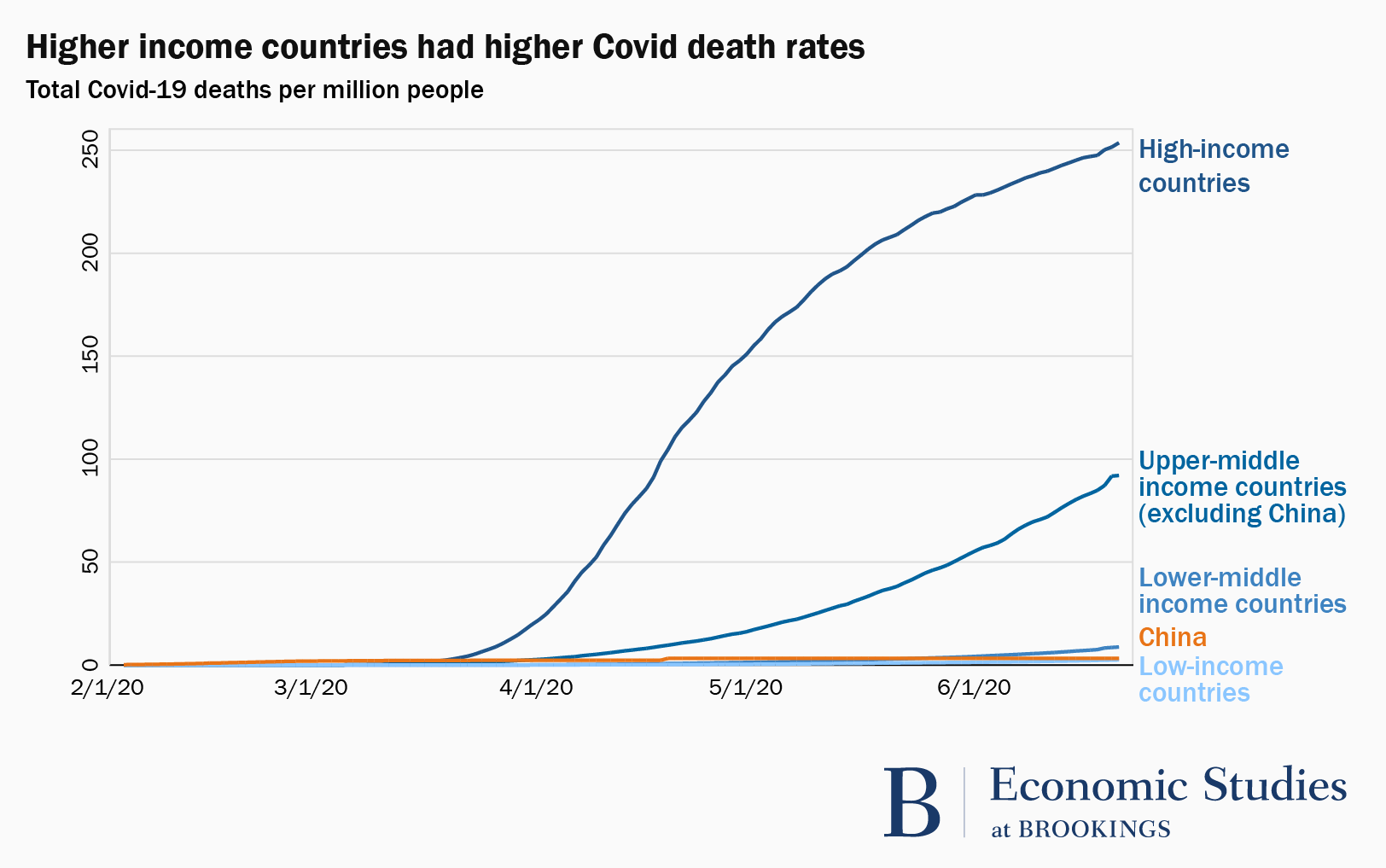 The authors—Pinelopi Koujianou Goldberg of Yale University and Tristan Reed of the World Bank Development Research Group—cite younger populations and limited obesity as the main factors contributing to the lower death rates. Developing countries have younger populations (for instance, 17.5 percent of Italians, but only 2.2 percent of Ethiopians are older than 70), and obesity rates are lower in developing countries (36.2 percent of adults in the United States, but only 2.1 percent in Vietnam are obese). Other factors, such as population density in the largest urban centers or weather affect mortality, but do not explain the observed differences between advanced and developing economies. (Many developing countries like the Philippines or Nigeria have dense cities, yet the death toll in these countries remains small compared with more advanced economies.)

“Whatever the source of this pattern, it gives a ray of hope to governments with fewer resources: It suggests that tragic as the loss of life may have been, it was not as large as anticipated,” the authors write. They caution that the pandemic has been unpredictable, and that enormous uncertainty remains about its future course. Yet the current difference between high-income and developing countries (even when China is excluded from the comparison) is so large, that the authors are cautiously optimistic.

Similarly, the paper finds that the immediate financial effects of the pandemic on developing economies, as a result of falling commodity prices and spillovers from the contraction in advanced economies, are severe, but not appreciably more severe than typical emerging market crises such as the 2015 commodity price shock. Countries dependent on exporting oil and non-precious metals such as copper, aluminum, and tin, whose prices fell sharply in March, likely face a more difficult recovery than others. The most severe effects are associated with the collapse of the price of oil—the result of the decline in demand due to COVID-19 and the price war between Russia and Saudi Arabia. Commodity shocks are a well-understood phenomenon, and will likely play out through familiar channels, the authors say.

After the onset of the pandemic, non-residents dumped an unprecedented $69.4 billion in emerging market stocks and bonds in March. The value of many currencies plunged and interest rates on emerging market sovereign debt spiked, making it more difficult to finance the emergency response and raising the specter of default. In response, the Group of 20, which includes wealthy nations as well as large emerging market economies, offered to suspend the debt service payments of the poorest countries from May 1 until the end of the year. But estimates of broader measures of net capital flows out of emerging markets, which include direct investments in businesses and banking flows in addition to stocks and bonds, suggest that outflows, while very large, are not unprecedented; they could be of the same magnitude as observed in 2015, the authors say.

“We are … concerned about long-run effects arising from the shutting down of economies: the loss of education among girls, the suspension of vaccinations among children, the falling back into poverty of those living close to subsistence.”

Developing countries own response to the virus is taking a considerable economic toll. Like the advanced economies, many imposed nationwide lockdowns, which can have especially severe effects for those living close to poverty. Preliminary evidence based on phone surveys indicates substantial loss of employment and income due to mobility restrictions, and cutbacks in food consumption. The lockdowns could also have long-run effects. Disruptions in basic vaccinations could jeopardize children’s health; reduction in coverage of labor and delivery as well as sick-child care likely will lead to significant increases in maternal and child deaths; and as was the case with the Ebola crisis, many children, especially young girls, may not return to their schools once they reopen.

The authors also worry that the pandemic will fuel the ongoing backlash against globalization in many developed countries, including the United States, and will further reduce the trade and immigration that have played an important role in reducing poverty around the world.

“We are … concerned about long-run effects arising from the shutting down of economies: the loss of education among girls, the suspension of vaccinations among children, the falling back into poverty of those living close to subsistence. Above all, we are concerned about the implications that advanced economies turning inward will have for the growth and development of poorer countries,” the authors conclude. “These effects … may prove the most tragic legacy of the COVID crisis in developing countries in the long run.”

The authors did not receive financial support from any firm or person for this paper or from any firm or person with a financial or political interest in this paper. Pinelopi Goldberg was Chief Economist of the World Bank Group until March 2020, received compensation from the World Bank in that capacity, and is currently a non-resident Senior Fellow at the Peterson Institute for International Economics. Tristan Reed is an economist for the World Bank. They are currently not officers, directors, or board members of any organization with an interest in this paper. No outside party had the right to review this paper before circulation. The views expressed in this paper are those of the authors and do not necessarily reflect those of the World Bank or Yale University.

Mandated and voluntary social distancing during the COVID-19 epidemic

COVID-19 is also a reallocation shock