Big-city populations are still growing, according to new mid-decade Census Bureau statistics. That is, between 2010 and 2015, the annual growth rates of cities with over half a million people were double the average annual rate between 2000 and 2010; and the combined urban cores of the nation’s major metropolitan areas continue to grow at faster rates than their surrounding suburbs.

Both of these national trends counter pre-2010 patterns, providing further evidence that 2010 to 2020 could be the “decade of the city”. Yet the new data highlight some changes in city and suburb growth, in conjunction with broader Snow-Belt to Sun Belt population shifts, which somewhat alter that earlier picture.

This decade’s continued big-city growth trend is evident (Figure 1). The combined populations of the nation’s largest cities continue their post-2010 growth of more than one percent a year, compared with only 0.5 percent, on average, during the 2000 to 2010 period. 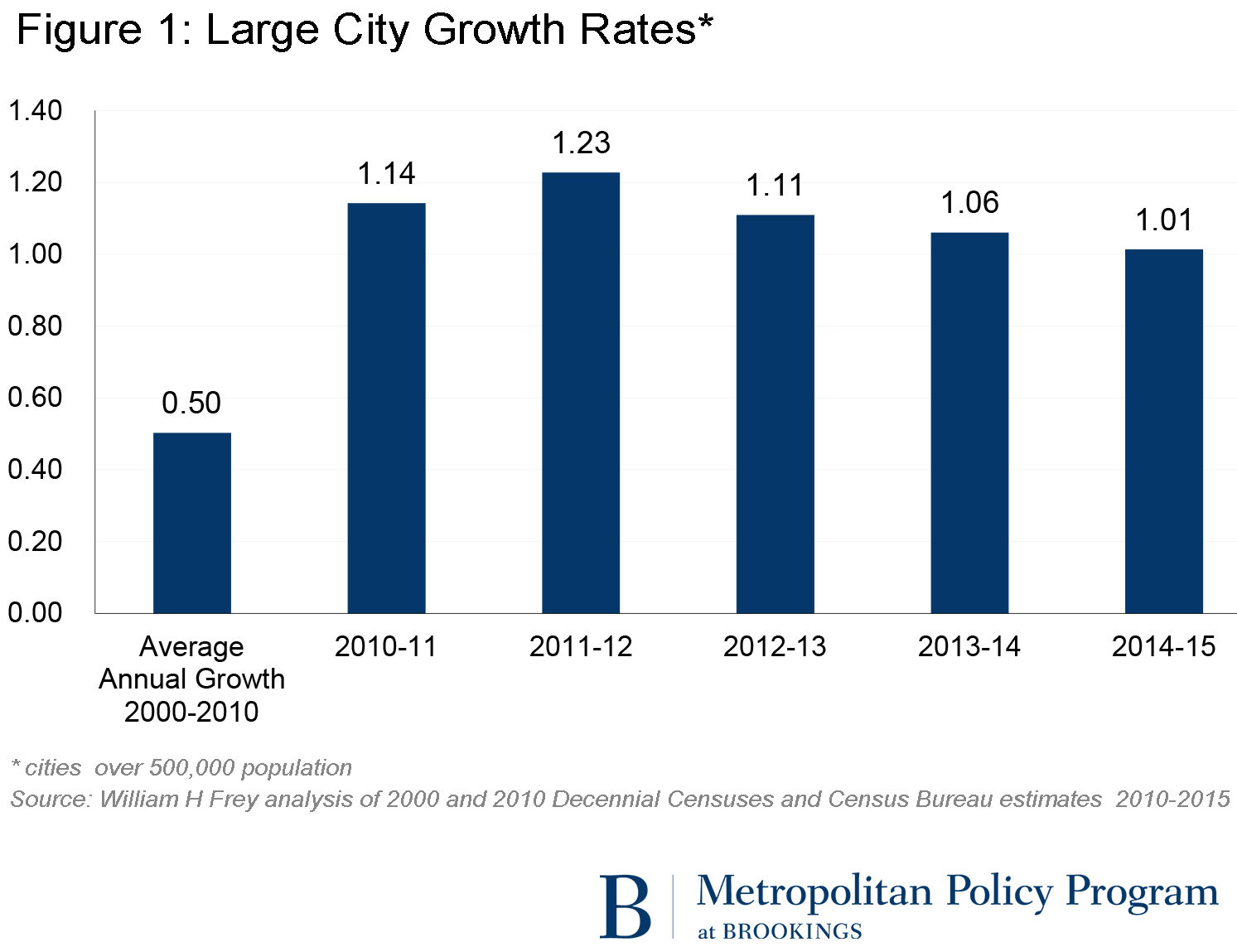 In half of these 34 cities, growth over the recent five year period exceeded that of the previous ten years (Download Table 1). For example, New York City gained 375,000 people between 2010 and 2015, whereas between 2000 and 2010, its population increased by only 167,000. Similar patterns emerged in cities like Los Angeles, Houston, Philadelphia, San Diego, Dallas, San Jose, San Francisco, Seattle, Denver, Washington D.C., and Boston.

Yet gains between 2010 and 2015 showed different patterns of population gains and losses. Increases occurred in Houston, San Antonio, Fort Worth, Jacksonville, Denver, Portland, and Las Vegas, among other Sun Belt cities (Download Table 2). In contrast, New York City, Philadelphia, San Francisco, Washington, D.C., and Boston saw early gains shrink over time. In Chicago, Milwaukee, Baltimore, and Memphis early gains turned to losses over the past two years.  (Only Detroit showed losses for each year between 2010 and 2015.)

So, while most big cities saw their populations rise this decade, there is a trend toward increased growth in Sun Belt cities and decreased growth for others in the Northeast, Midwest, and on the coasts. This is consistent with broad regional population shifts to the South and West.

One byproduct of recent big-city growth is a reversal of the longstanding pattern of suburban growth outpacing city growth. Cities have grown faster than suburbs since 2010. 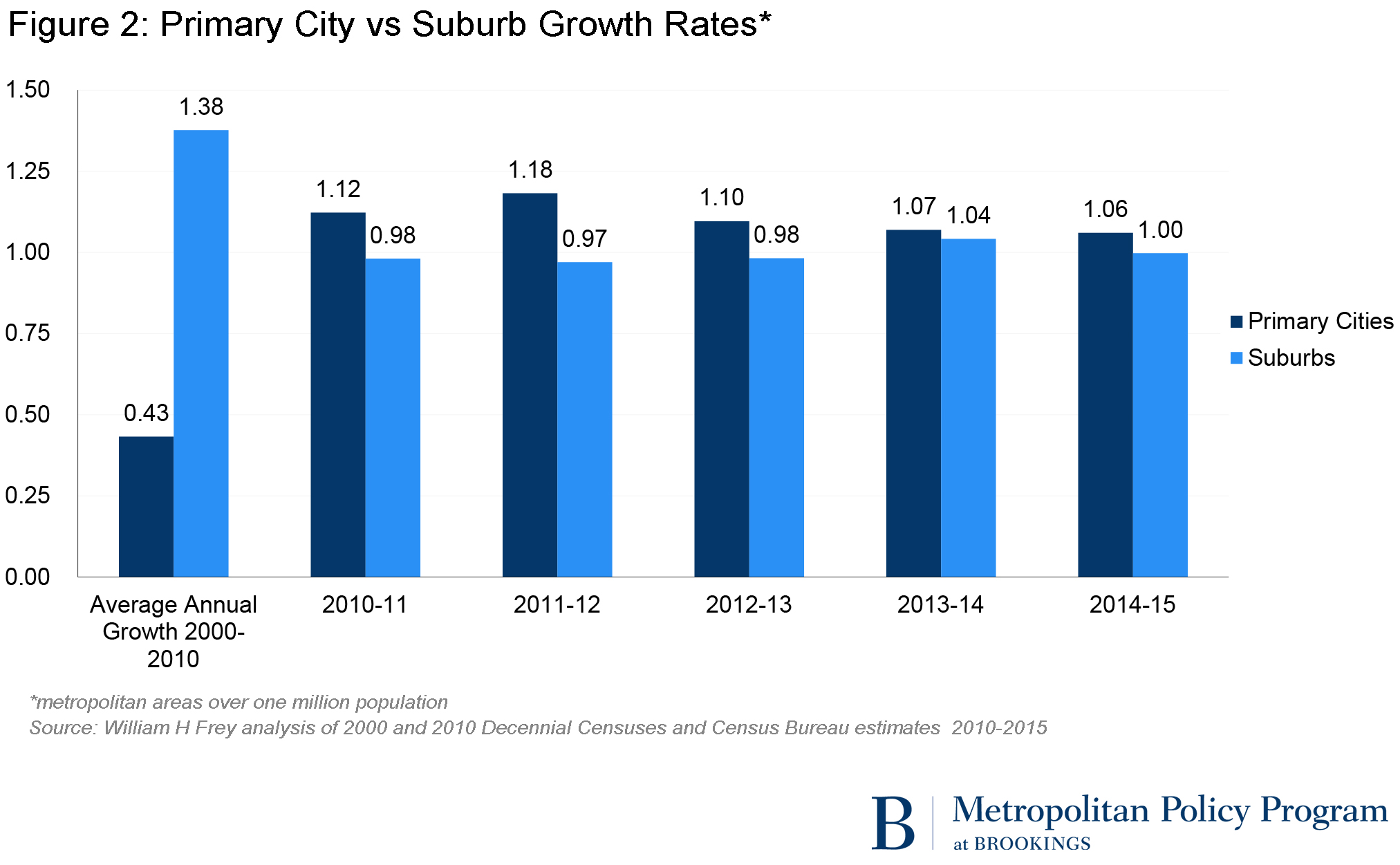 While the primary city (urban core) growth advantage was greatest between 2011 and 2012, city growth continued to outpace suburban growth between 2014 and 2015 for the 53 major metropolitan areas combined. This is the case for 20 large individual metropolitan areas including New York, Los Angeles, Philadelphia, Washington D.C., Miami, San Francisco, Seattle, and Minneapolis-St Paul (Download Table 3).

Despite the continuation of this national pattern, different trends emerged in the Snow Belt (Northeast and Midwest) and Sun Belt (South and West) regions (Figure 3). Within the Snow Belt, the combined primary city growth declined over the past four years.  These cities are still growing, but at slower rates, narrowing the city growth advantage. (Note: Suburban growth in the Snow Belt also declined slightly in the past year.) 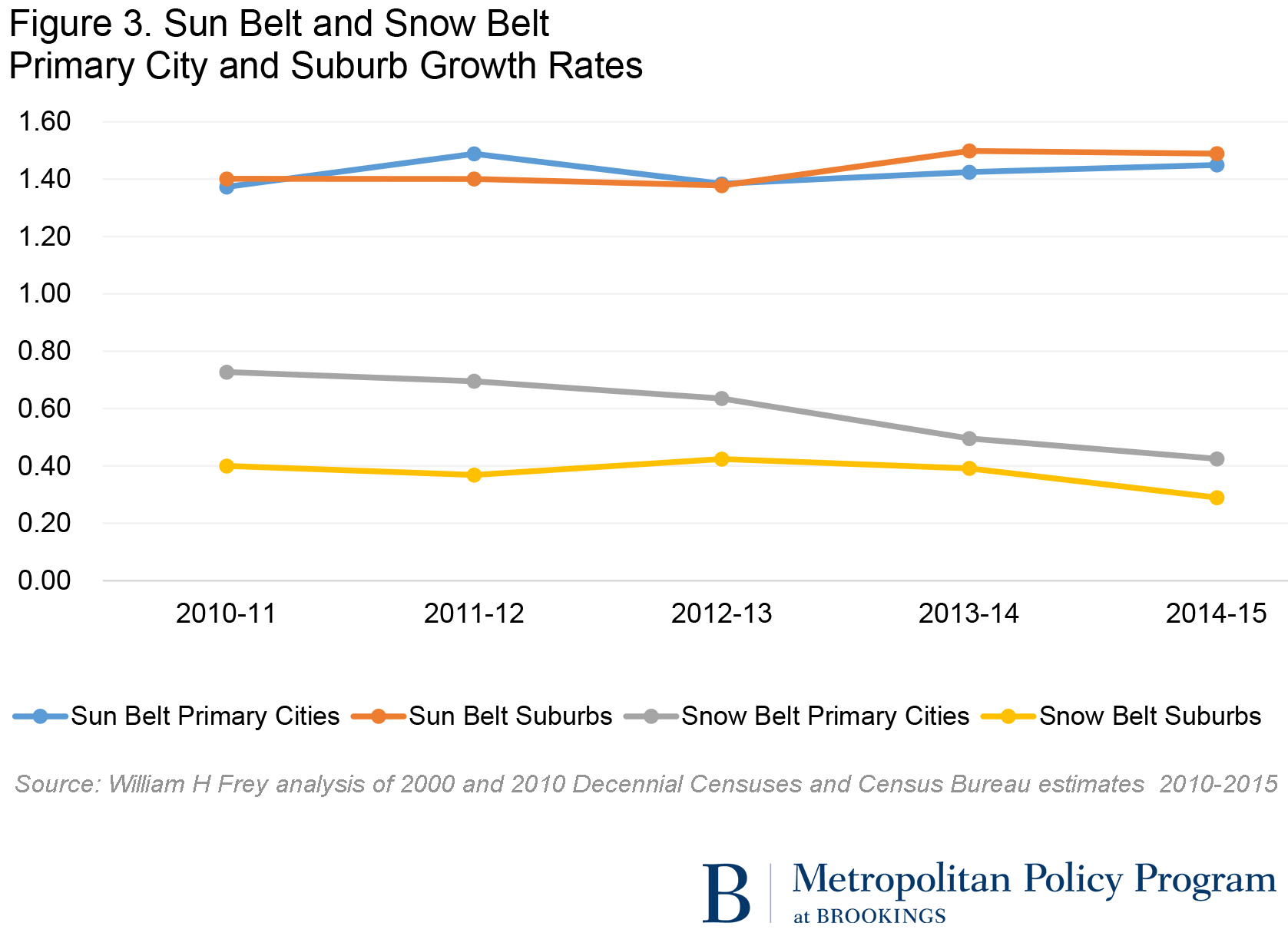 In metropolitan New York for example, primary city growth declined from 1.2 percent between 2010 and 2011 to just 0.6 percent between 2014 and 2015. At the same time, its suburban growth rate shrank from 0.5 percent to 0.3 percent. Although New York’s city and suburbs are both growing more slowly, city growth still exceeds suburban growth. This is also the case for Philadelphia, Boston, and Minneapolis St. Paul, among others.

Across Sun Belt metropolitan areas, however, there has been a rise in both primary city and suburb growth over the past two years, such that suburban growth has eclipsed city growth. This is not the case in all Sun Belt metropolitan areas (Los Angeles is a major exception), but is driven by the rapid city and especially suburban growth in Austin, Houston, Jacksonville, Raleigh, San Antonio, Las Vegas, Phoenix, and Dallas, among others.

One explanation for these new trends is the recent upswing in Snow Belt to Sun Belt migration which stalled during the early post-recession period. Related to that are modest improvements in the nation’s employment and housing markets, which are likely motivating young adults, who began the decade in cities such as New York, Boston, and Washington, D.C., to relocate to cities and suburbs in faster growing Sun Belt areas.

Does this mean that the “decade of the city” prediction will prove to be wrong? Quite the contrary. The new numbers show that, even with declining growth, big northern and coastal cities are still adding to their populations and growing faster than their suburbs; and in the Sun Belt, city growth is generally rising, even as surrounding suburbs grow faster. At mid-decade, most big cities are faring well and generally much better than they were in the not too distant past.

Here’s how to make sure America’s new industrial policy benefits workers and entrepreneurs across the country, not just a handful of superstar urban regions