The death and massive displacement that Hurricane Katrina and subsequent levee failures caused in New Orleans 10 years ago caused many Americans at the time to ask: How could this happen? How could so many vulnerable residents—especially low-income African Americans in poor health—be left behind in the devastation?

At the time, my colleague Bruce Katz and I suggested one contributing factor: “a long-standing policy of neglect toward the city’s most vulnerable residents, exemplified by their continued segregation into neighborhoods of high poverty.”

Our analysis in 2005 found that among the 50 largest cities in the United States, New Orleans before the storm had the second-highest share (behind only Fresno) of its poor residents living in neighborhoods of extreme poverty, where more than 40 percent of individuals had incomes below the poverty line. We suggested that, in addition to suffering long-term effects on their well-being from living in such neighborhoods, residents at the time of the storm may have been cut off from information about the scale of the impending disaster, from private transportation that could help them evacuate, and from social networks outside the city that could provide them shelter and assistance.

As the world turns its attention again to New Orleans 10 years after the storm and assesses its recovery, the city’s—and region’s—geography of poverty has shifted markedly.

As the Data Center observes in its recent post-Katrina look at the region, the poverty rate in the city of New Orleans in 2013 (27 percent) was statistically unchanged from 2000. The city had about 33,000 fewer poor individuals in 2013 than in 2000, but the drop in the city’s overall population left the poverty rate roughly the same.

Our analysis indicates, however, that the share of the city’s poor residents living in neighborhoods of extreme poverty dropped from 39 percent in 2000 to 30 percent in 2009-13 (the latest small-area data available). This drop occurred at the same time that concentrated poverty rose dramatically in many major American cities, spurred by the Great Recession and slow recovery. As a result, whereas New Orleans ranked second among big U.S. cities in concentrated poverty prior to the storm, it ranked just 40th by 2009-13 (see Appendix table). 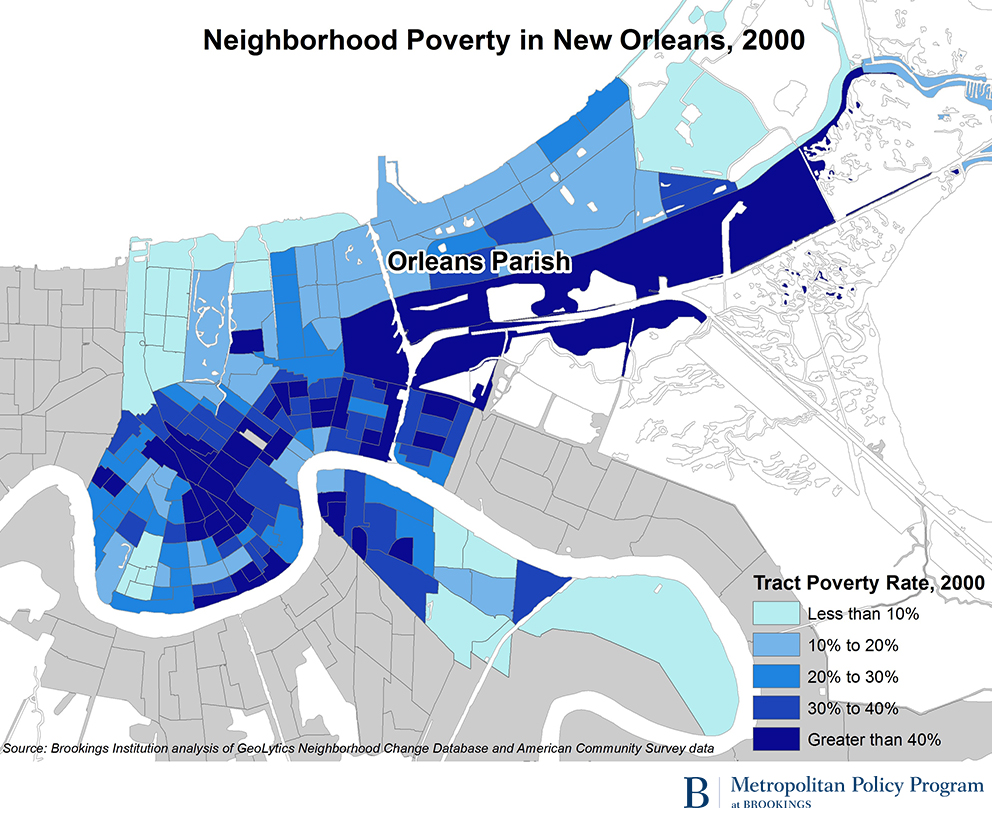 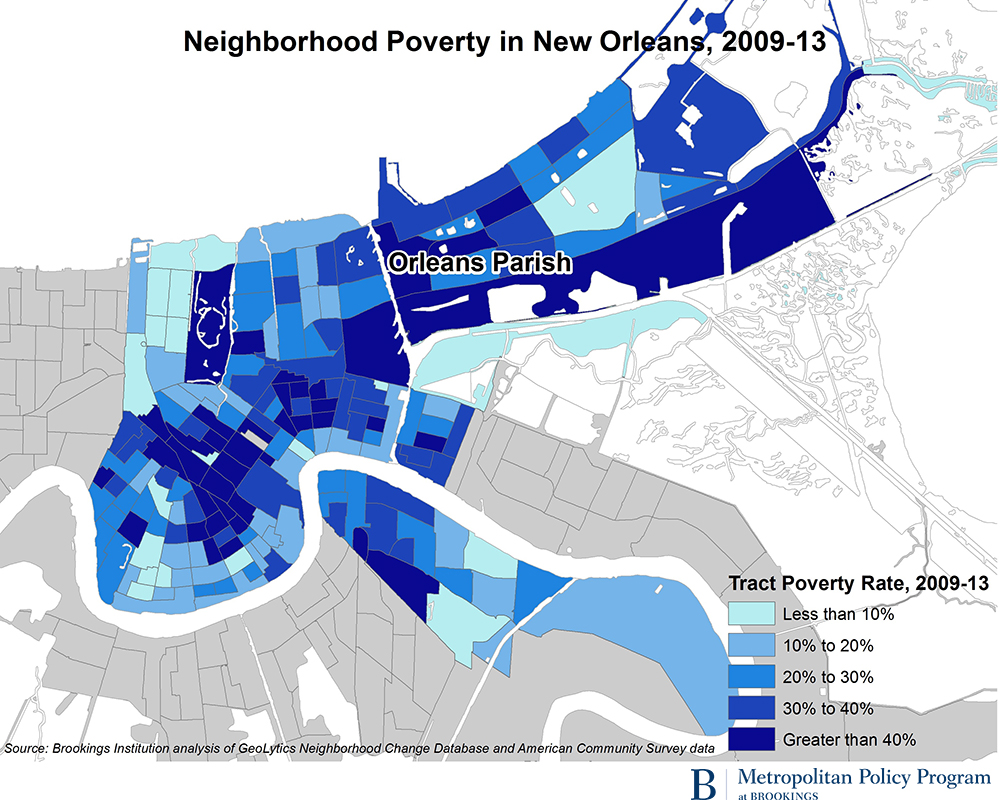 To be sure, there still remain a great many very poor neighborhoods in New Orleans. In 2009-13, 38 of the city’s 173 census tracts had poverty rates exceeding 40 percent, down only slightly from 41 tracts in 2000 (see maps). Yet the population of those neighborhoods dropped dramatically, from more than 90,000 in 2000 to just over 50,000 in 2009-13. For many reasons, neighborhoods that were poorer before the storm have been much slower to rebuild and recover their previous population levels.

Poverty in New Orleans has not disappeared—far from it—but it has definitely scattered. As the city demolished its major public housing projects after the storm and replaced them with less-dense mixed-income housing, the number of households with housing choice vouchers tripled, as documented in a recent Data Center report. While voucher holders within the city of New Orleans tend to cluster in higher-poverty areas, many of those neighborhoods are not as poor as the public housing communities where many of the city’s low-income families used to live.

Meanwhile, poverty has also spread well outside the city’s borders. While the city’s poor population declined between 2000 and 2013, it rose by a nearly equivalent amount in the rest of the metropolitan area. And although the poverty rate in the rest of metro New Orleans has increased (from 13 percent to 16 percent), relatively few poor residents of those areas live in communities of extreme poverty, notwithstanding notable differences by race and ethnicity.

These data only begin to hint at the complicated movements of households and economic fluctuations that have influenced the extent and location of poverty in New Orleans, before and after Katrina. Yet as more cities and regions strive to increase their economic, social, and environmental resilience to future large-scale disasters, trends in concentrated poverty in New Orleans and other places bear continued scrutiny from policymakers and the public.