Nevermind that this approach is anathema to achieving a true national purpose and vision and turns the program into one of revenue distribution instead of one designed to meet national needs; it has dominated the debate in Washington for years and is very much on the mind of senators from states like Texas, Arizona, and Florida who perceive they are treated unfairly. [Read this great book for more.]

So it was interesting that the U.S. Government Accountability Office recently found that, since 2005, not one state received less than the total of its contributions to the highway trust fund. In the absence of any policy reform, how can it be that there are no more donor states?

It is due, in part, to the transportation department’s Equity Bonus Program, which exists solely to make sure states get a satisfactory rate of return. That’s all it does. Amazingly, Equity Bonus is the largest federal highway program, and states can use the funds for almost any conceivable transportation purpose.

Another reason we have no more donor states is because those highway tax revenues coming in are not enough to pay for the spending going out. Since September 2008 about $60 billion in general fund revenues have been used to prop up the transportation program. Over $34.5 billion in the form of direct infusions to the highway trust fund in order to balance out the ledger, and another $27 billion from 2009’s stimulus package. In other words, states are not just receiving their “own” highway users’ contributions back from the federal government, but also massive assistance overall from the general fund.

Senator Kay Bailey Hutchison recently praised the good fortune for Texas from this arrangement at a recent event on transportation funding in metropolitan Dallas. So it may seem odd that she also chose the occasion to plug the Highway Fairness and Reform Act, a bill she introduced last year that would allow states to opt-out of the federal transportation program.

Why would a state like Texas want to be excluded? Here’s the rub: the states would drop of the national program but, under the new law, would keep receiving pretty much the same federal highway allocations they’re getting now. That’s a sweet deal.

A few years back, we cheekily recommended something similar. The difference being that a drop-out state would truly drop-out and would no longer get the federal cash. It’s a bit of calling their bluff since no state can really afford to forgo the money. Our own analysis shows that, since 1995, federal sources make up roughly one quarter of the revenues the states spend on roads. In some states – like Texas at 29 percent – the shares are much higher. 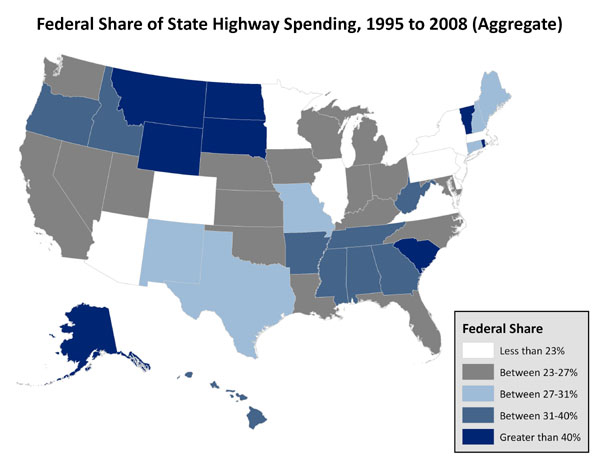 It is important to note this is not just another wacky conversation about Texas seceding from the union. This is the fundamental part of the ongoing debate about the future of the nation’s transportation program—how do we reform the existing program from what it has become—a general purpose cash-transfer program—to one that purposefully and strategically invests in what matters?

The GAO points out that the ‘rate of return’ argument becomes difficult to sustain as the gas tax revenue dwindles. No doubt the states are facing crushing fiscal problems but as long as we remain mired in short term parochial grabs for funding with no policy purpose the transportation program will not aid in the development of a productive and sustainable economy over the long term.