2018 was a dramatic year in world affairs. From Iran to North Korea to Russia to Saudi Arabia and beyond (outer space too), U.S. power and values have been repeatedly tested—with mixed results.

Below is a recap of the major stories of the year, and the scholarship that Brookings experts brought to bear in order to make sense of perplexing, worrying, and at times outright dangerous developments.

BIG IDEA
The liberal international order is fraying, a trend that could threaten global peace and stability in perhaps irreversible ways. The United States has a vital role to play.

In his book “The Jungle Grows Back: America and Our Imperiled World,” Robert Kagan writes that American sentiment seems to be leaning increasingly toward withdrawal in the face of disarray around the world—and argues that American withdrawal would be the worst possible response. Watch Kagan discuss those themes:

Meanwhile, Brookings President John Allen argued that President Trump “has tarnished America’s image as the leader of the free world and exemplar of an enlightened, liberal society. He has discarded America’s traditional role as a positive, transformative force in the world in favor of one focused exclusively on transactions that he perceives (often incorrectly) to be in the nation’s best interests.”

BIG IDEA
Geopolitics are back, and with a new face. Increasingly, great-power competition now takes the form of hybrid warfare and political interference.

As Thomas Wright wrote: With neo-authoritarianism on the rise, the old assumptions undergirding a common set of Western values just won’t do. In a sense, the return to great-power rivalry was inevitable. Bruce Jones and Torrey Taussig argued that the new era of geopolitics involves, at its heart, competition over internal political systems, with profound implications for democracy around the world.

The international security environment in 2018 is measurably worse than even a few years ago, as Bruce Jones, Charles Call, Daniel Toubolets, and Jason Fritz detailed. It’s not that the world is universally less stable—rather, violent conflict is concentrated in specific regions (the Middle East and North Africa, importantly) and reflects specific challenges.

Read our research on Yemen, Syria, and Gaza, in particular.

The year in review

May
President Trump announces that he plans to withdraw the United States from the Iran nuclear deal (the Joint Comprehensive Plan of Action, or JCPOA), signed in 2015.

A range of Brookings experts quickly weighed in on the move, with Suzanne Maloney asking “How is America safer now?” and Bruce Riedel arguing that exiting the JCPOA will make a range of U.S. priorities in the region harder. Separately, Maloney wrote that after dumping the nuclear deal, Trump has no strategy for Iran. Samantha Gross explained the impacts on oil markets, Robert Einhorn and Maloney discussed the fallout of new sanctions on Iran, and many other scholars offered their takes.

June
President Trump and North Korean leader Kim Jong-un meet in Singapore, in the first-ever meeting between the leaders of the two countries.

Brookings experts reacted skeptically, with Jung Pak writing: “The Singapore summit produced little more than frothy statements without substance, with little accountability for Kim Jong-un to cease and dismantle his nuclear weapons program” and Ryan Hass explaining why the big winner was China. (You can listen to five experts discuss their takeaways here.) Jeffrey Bader outlined what Trump and Kim Jong-un each achieved, and Bader and Hass offered a report card a month later (spoiler: North Korea was let off the hook).

Read Jung Pak’s Brookings Essay, “The Education of Kim Jong-un,” for a deep dive on who Kim is and how he came to power.

Frank Rose acknowledged that the United States faces threats in space—including from Russia and China, in particular—but questioned whether a Space Force was the right solution. Michael O’Hanlon was also skeptical, arguing “major government reorganizations rarely provide panaceas” and “air and space operations will have to be linked closely—just as they are today already.”

July
In the wake of a tense NATO summit, Presidents Trump and Vladimir Putin meet in Helsinki, topped off with a highly controversial press conference.

Thomas Wright wrote that “the president is now unbound, acting in accordance with his visceral beliefs about America’s role in the world.” Alina Polyakova argued that Putin didn’t have to push the Kremlin’s narrative at the summit because Trump did it for him, and wrote: “Trump’s deferential behavior to Putin in Helsinki has undermined the president’s own desire to ‘reset’ the Russia relationship, likely ensuring just the opposite: a more hawkish approach to Russia from his own government.” Steven Pifer weighed in on what comes next, and Frank Rose discussed whether the summit resolved any arms control issues.

Summer/Fall
The United States and China gradually escalate a tit-for-tat trade war, affecting billions of dollars in trade between the two countries.

In July, David Dollar explained that a U.S.-China trade war had in fact begun. Watch him explain the stakes:

Cheng Li outlined the reactions from the Chinese middle class, arguing that although that group had faulted Xi Jinping, it may soon blame Trump for its woes. And Ryan Hass laid out principles for managing U.S.-China competition, predicting that absent a presidential-level intervention, the relationship is likely to deteriorate further. 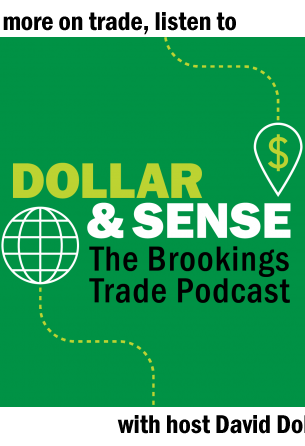 Listen to Dollar and Eswar Prasad discuss the U.S.-China trade war in the first episode of “Dollar and Sense: The Brookings Trade Podcast.” Following the November meeting between Presidents Trump and Xi Jinping on the sidelines of the G-20 summit, Mireya Solís wrote to enjoy the Trump-Xi trade war truce while it lasts—but brace for 2019.

October
Journalist Jamal Khashoggi was killed in the Saudi Arabian consulate in Istanbul at the direction of Saudi officials, including likely Crown Prince Muhammed bin Salman.

Bruce Riedel wrote that Khashoggi’s disappearance “fits with a pattern of crude intimidation and the silencing of criticism and dissent” on the part of Saudi Arabia, adding that U.S. arms sales to the Saudis are essential leverage. Samantha Gross explained why the U.S. reaction to the killing—and the Saudi response—likely wouldn’t spark an oil war, and Daniel Byman and Michael O’Hanlon called for putting the brakes on the Saudi-led war in Yemen. Robert Kagan decried “the myth of the modernizing dictator,” in the form of Muhammed bin Salman, and Tamara Cofman Wittes wrote that U.S. sanctions on Saudi Arabia aren’t enough—rather, the Saudi leadership needs to own its errors and commit to a better course.

October
The Trump administration announces its plan to withdraw from the Intermediate-Range Nuclear Forces (INF) Treaty, a U.S-Russia arms control treaty signed in 1987.

Steven Pifer called the move “a major mistake,” pointing out that the United States will get the blame for killing the treaty and Russia will be able to violate the treaty’s limits outright, among other concerns. Michael O’Hanlon agreed that withdrawing unilaterally would be the wrong step, and argued that Washington should take steps that would help it avoid the sole blame for the treaty’s demise. Frank Rose similarly worried that the decision would hurt the U.S. ability to develop an effective allied response to Russia’s violation of the treaty.

Fall
The Brexit saga intensifies, as British Prime Minister Theresa May struggles to work out an agreement with her European counterparts and faces tough opposition domestically, largely because of concerns about the Northern Ireland issue.

The U.K.’s decision to leave the European Union uncovered latent tensions in the constitutional arrangements between the country’s different nations and regions, as Amanda Sloat analyzed. The U.K.’s departure from the EU in March 2019 looks set to alter not only the EU, but also the long-standing ties that have held England, Northern Ireland, Wales, and Scotland together. She also explained why people are arguing over the Irish border. Thomas Wright spelled out Prime Minister May’s “nearly impossible task of bringing Brexit to a successful conclusion.”

December
The 24th Session of the Conference of the Parties (COP 24) to the United Nations Framework Convention on Climate Change begins in Poland. The Trump administration’s decision to withdraw the United States from the 2015 Paris Agreement looms large.

Experts from across Brookings gave their takes on what to watch—including the final details on the so-called “rulebook,” which countries emerge as climate leaders, financing for carbon-reduction efforts, innovations coming from sub-national actors, and more. Samantha Gross said that “the global political environment is really challenging right now, with nationalism taking hold in many countries” (as cited in the New York Times), and Todd Stern and David Victor discussed key issues at stake in climate-related challenges more broadly.

Read “a practical guide to the new politics and geopolitics of climate change” by David Victor and Bruce Jones; check out the Cross-Brookings Initiative on Energy and Climate paper series; and learn about the geopolitics of low oil and gas prices.