The horrific terrorism in San Bernardino has revived fears of extremist jihadists operating on American soil. But the American public has been dealing with the issue of terrorism in the name of Islam since 9/11. If we weren’t in the middle of a polarized political season with an unprecedented number of GOP candidates competing to get attention, the discourse—and American public perceptions of Islam and Muslims—would not look all that different from the past few years.

In a poll I conducted between November 4 and 10, 2015—after a reported ISIS bomb brought down a Russian civilian airplane over Egypt but before the Paris and San Bernardino attacks—several trends are clear. Many of the attitudes expressed are outgrowths of the American experience over the past decade and a half.

First, Americans differentiate between the “Muslim people” and the “Muslim religion,” and they view Islam more unfavorably than they do Muslims. This may have many reasons, but at the core, it is probably easier for many Americans—with strong anti-discrimination norms—to express dislike of an abstract idea rather than to appear prejudiced toward people. Even Donald Trump prefaces his anti-Muslim or (anti-Hispanic) rhetoric with “I love Muslims.” It may also be partly a function of familiarity (as my seventh point below suggests).

The contrasting American attitudes on Islam and Muslims have been around for some time, though views of Islam in particular worsened in the months after 9/11. They never recovered, even during the early days of the Arab uprisings, which generated much sympathy among Americans.

My recent poll indicates nearly identical views of Islam in 2015 as in the optimistic days of 2011, with 61 percent of Americans also expressing unfavorable views. But views of the Muslim people slightly improved, with 53 percent expressing favorable views. This comes despite the pessimism about the region, the rise of ISIS, and the bombing that dominated the news even before the Paris and the San Bernardino attacks; After all, 70 percent of Americans identified ISIS as the biggest threat facing the United States a year ago, which is about the same percentage expressing this view in my most recent poll. 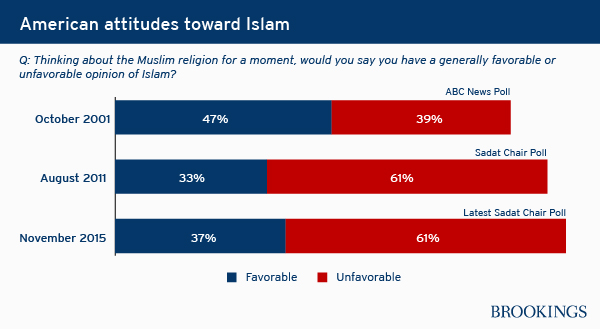 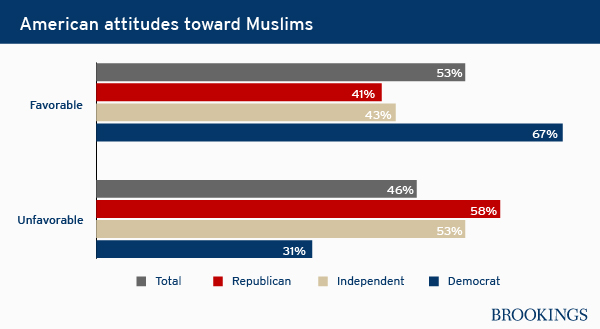 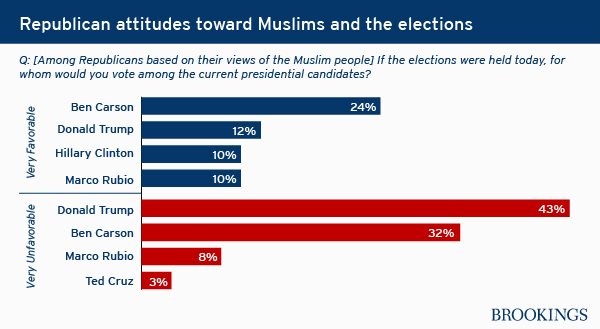 Fourth, Americans generally do not accept that there is a clash of civilizations, but the partisan divide on this issue is particularly large. Only 39 percent of Americans say Western and Islamic religious and social traditions are incompatible, while 57 percent say most people in the West and the Islamic world have similar needs and wants. These results are comparable to the results of a poll I conducted in April 2011, where the breakdown was 37 percent to 59 percent respectively. Party differences cannot be missed: While only 26 percent of Democrats say the two traditions are incompatible in the latest poll, 56 percent of Republicans say the same. 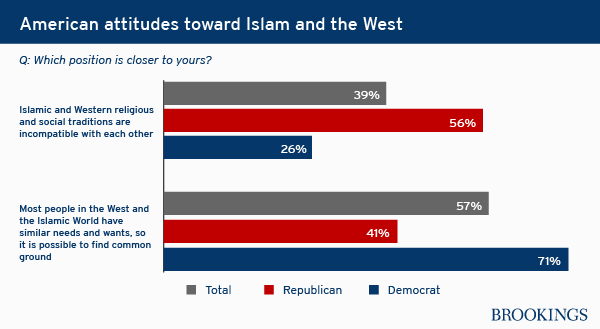 But knowing some Muslims, even well, does not influence American views of Islam as much. While those who know Muslims have slightly improved views of Islam, still, majorities of Republicans and Independents retain an unfavorable view of the Muslim religion. And even Americans who say they know some Muslims very well are divided down the middle in their attitudes toward the Muslim religion. 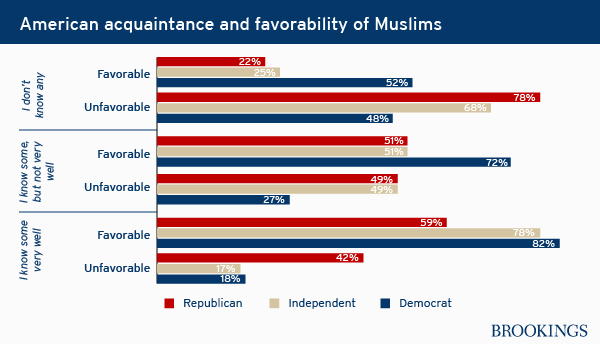 Looking in the mirror

In the end, does it really matter how Americans view Muslims? Enormously—and not just because of policy implications, but also because it inevitably affects the way Muslims see themselves.

Our current debate is of course colored by the breathtaking exaggerations of an unusually intense political season. In the process, we forget that religion and ethnicity are often only small parts—sometimes mere afterthoughts—of how people see themselves. A New York lawyer, Anika Rahman, captured this complexity well in the days after 9/11 when she wrote in the New York Times:

“I am so used to thinking about myself as a New Yorker that it took me a few days to begin to see myself as a stranger might: a Muslim woman, an outsider, perhaps an enemy of the city. Before last week, I had thought of myself as a lawyer, a feminist, a wife, a sister, a friend, a woman on the street.”

It’s a reminder that identity is a relationship. People define themselves in part as a function of how others view them; we are what we have to defend. The worst thing that Americans can do is paint the wrong picture of Muslims—including their own fellow Americans.

The GOP should see Nancy Pelosi as a role model, not a villain