China’s rapid economic progress has been associated with a rapidly rising carbon footprint. The country now wonders how it can extend its economic bull run while achieving its ambitious climate goals. In this blog, we look at China’s climate challenge through the lens of urban planning. By embracing more populous and denser megacities, China could achieve higher economic efficiency and lower emissions at the same time.

In many developing countries, urbanization is often associated with higher carbon emissions, resulting from rising consumption levels and associated energy needs. However, beyond a certain level of per capita income, as people move into denser urban spaces, their carbon footprint declines. The recent World Bank Commodity Markets Outlook shows that urban density tends to lower energy consumption intensity from transport, infrastructure, and accommodation. Researchers at Australian National University have found that this is true also for China. As illustrated in Figure 1, there is a statistically significant negative relationship between population density and per capita emissions, even after controlling for income, economic structure, and proxies for environmental policy. 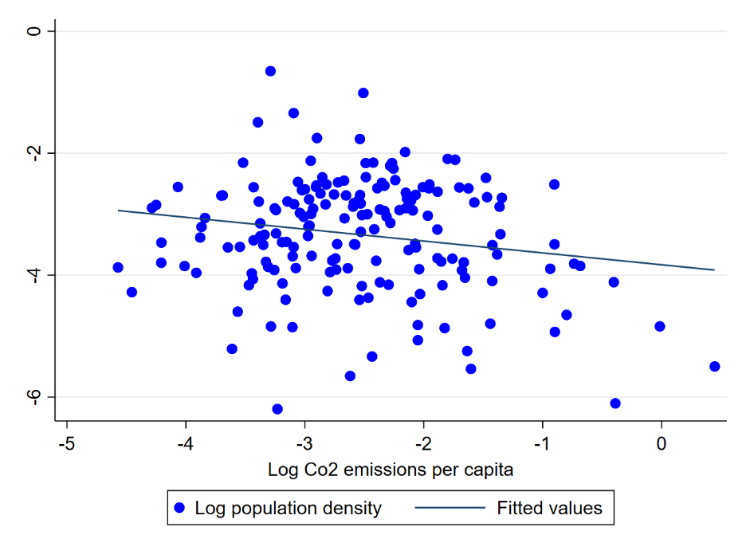 This finding is important because China is still urbanizing. Assuming an urbanization rate of 70 percent by 2030, some 80 million people may move to urban areas over the next decade alone. For China’s economy and its emission intensity, it matters where these people move to.

In the past few years, many of China’s megacities, such as Beijing and Shanghai, have made plans to cap the size of their populations. China has traditionally controlled rural-urban migration through the hukou household registration system. In recent years, such controls have been lifted in smaller cities but tightened in megacities. Meanwhile, Chinese cities have been expanding outward: China is the only country in East Asia to have declining population density in its large cities, as the expansion of urban boundaries has outpaced population inflows. This does not augur well for efficiency or emissions.

A striking pattern that has long fascinated both urban scientists and economists is that the distribution of city population size and rank in many countries seems to closely follow the rank-size rule. That is, the rank r associated with a city of size S is proportional to S to some negative power. The special case in which the estimated power equals –1 is known as Zipf’s law, named after a linguist, George Zipf. Of course, this empirical regularity serves mainly illustrative purposes. Benchmarking China’s city size distribution against Zipf’s law reveals how government policy has shaped China’s urbanization in ways that may run counter to economic forces.

In the early 19th century, China’s city size distribution closely followed the rank-size rule. After the 1960s it diverged substantially, as industries and industrial centers were relocated from the coast to the interior under the Third Front Movement. Since the mid-1990s, as migration to the coastal areas increased, China’s largest coastal cities started to grow rapidly, restoring a more natural pattern of urbanization. Nonetheless, China’s megacities remain significantly less populous and less dense than one might expect, and its mid-size cities are much larger (Figure 2). Indeed, if Zipf’s law held, Beijing and Shanghai would be respectively three and four times more populous. Zipf’s law is a special case that tends not to hold in reality, but even a more moderate rank-size rule would imply substantially more populous megacities. If Guangzhou had the same density as Seoul, for example, it could accommodate 4.2 million more people.

One reason for this is that China’s urban planners have discouraged its megacities from growing too large in population size. Resistance by existing residents who fear the influx of rural migrants and the overcrowding of public services may be one reason. China’s fiscal system, in which local governments are highly dependent on land sales to raise revenues, has also contributed to an extensive model of urbanization, lowering population density.

Denser megacities would be good for emissions, and high productivity services

Allowing China’s prosperous coastal cities to grow further in size and to become denser in the process could play an important role in decarbonization.  A back-of-the-envelope calculation suggests that population inflows into China’s largest cities in line with Zipf’s law, for example, could be associated with declining per capita emissions in the order of 7 percent on average for China’s 10 largest cities.

These emission declines would come at little cost—indeed, more densely populated cities would likely also be more productive. The recent World Bank Pancakes to Pyramids report shows how smart urban planning, combined with investments in infrastructure, can reap the economic benefits of denser cities while turning them into vibrant livable spaces that are attractive to the best talents. Concentrating more jobs and economic activities in China’s most productive cities could do much to help shift China’s growth model toward innovation, domestic consumption, and high value services.

In 2014, the World Bank’s Urban China report stressed the importance of city density and labor mobility in China’s next development phase. China’s new climate goals add another reason why this agenda remains more relevant than ever.

How sharp will be the global slowdown?