The “Misery Index,” an economic measure invented by former Brookings economist Arthur Okun in the 1970s that combines the unemployment rate with the inflation rate, has been at its lowest levels over the past year since the 1950s according to calculations by Senior Fellow Gary Burtless. In recent year-end commentary about the job market, Burtless, the John C. and Nancy D. Whitehead Chair, explained that “Back when politicians and voters cared more about inflation than they currently do,” Okun proposed this indicator “to summarize the dual hardships of inflation and unemployment.” The Index stood at 5.5 in November 2015 and averaged 5.37 over the period January-November 2015. It reached an all-time high, 21.98, during the final year of Jimmy Carter’s presidency. (see historical data.) 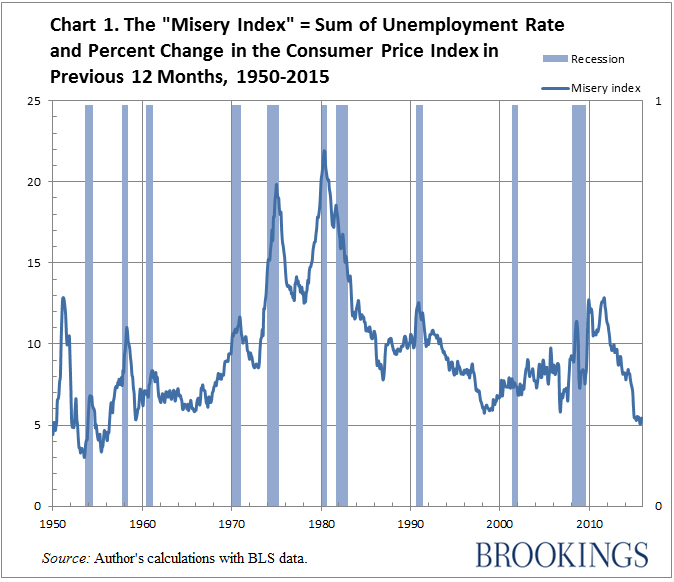 In his jobs analysis, which was published as part of a “Top Economic Stories of 2015” interactive, Burtless observed that “The good news in 2015 is that unemployment continued to fall and real wages began to rise. The less welcome news is that key measures of labor force participation failed to improve.” Burtless has also authored a more recent commentary on the BLS jobs report for December, which he said “showed remarkable strength in the U.S. job market even as global financial markets were trembling.”

Arthur Okun (1928-1980), also served on the President’s Council of Economic Advisers and was co-founder, with George Perry, of the Brookings Papers on Economic Policy. He also wrote the classic book “Equality and Efficiency: The Big Tradeoff,” which was re-released by the Brookings Institution Press in 2015.

Watch David Wessel, director of the Hutchins Center on Fiscal and Monetary Policy, explaining the impact of Okun’s work (and here’s an event about it, too).

What can the G-7 learn from China’s transition to climate-smart growth?