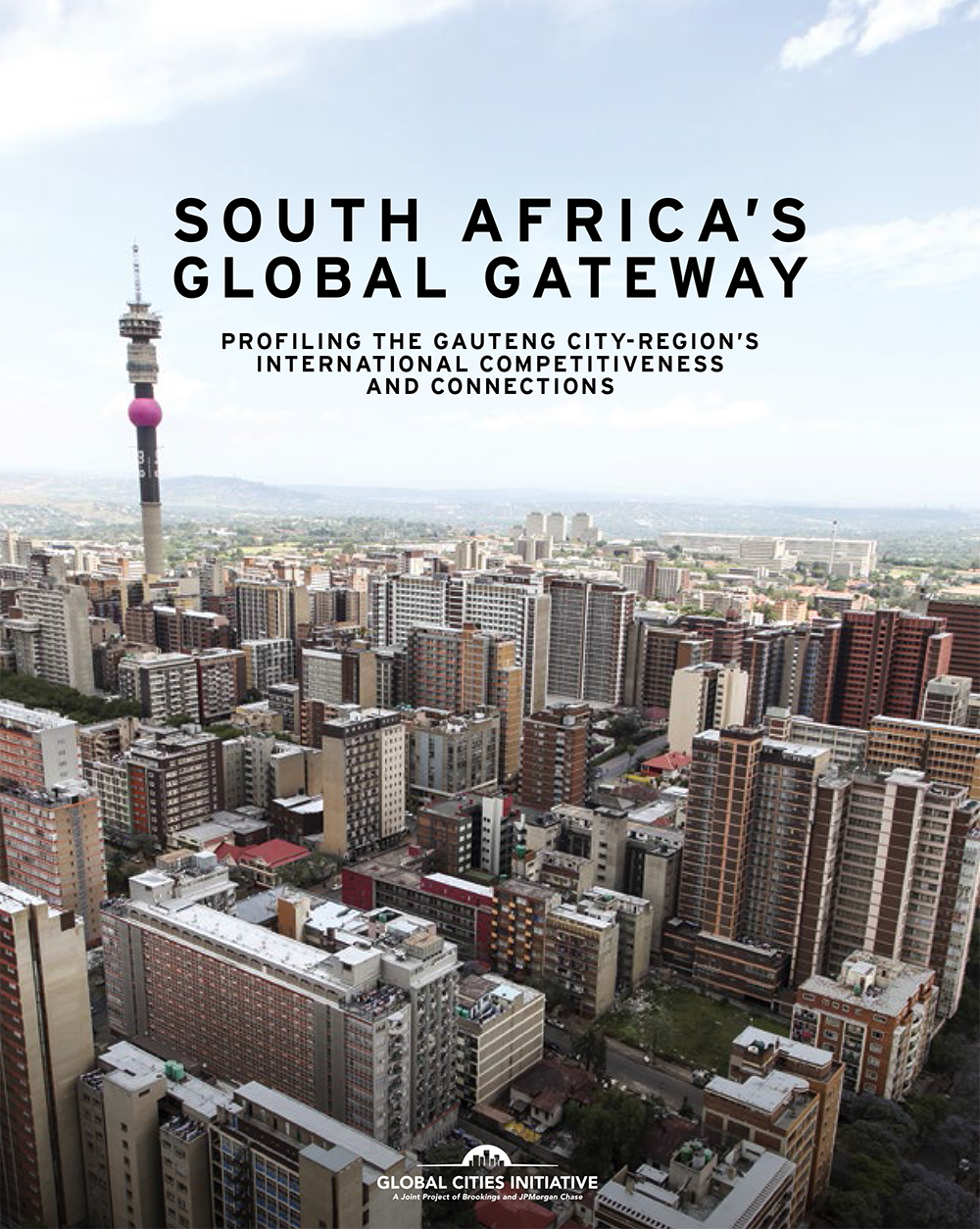 Yet as in many other emerging market cities, too many residents still lack the skills, networks, and access to benefit from, and contribute to, the Gauteng City-Region’s economy. Significant levels of unemployment, income inequality, and social exclusion are hindering progress toward full equality of opportunity and the city-region’s long-term economic competitiveness.

This report, developed as part of the Global Cities Initiative, a joint project of Brookings and JPMorgan Chase, provides a framework for the Gauteng City-Region to examine its competitive position in the global economy, offering information and insights to inform regional leaders working to sustain the region’s prosperity. Its key findings are:

The Gauteng City-Region can take advantage of changing market, technology, and demographic trends, but it must focus on the core drivers and enablers of competitiveness. A competitive region is one in which firms can compete successfully in the global economy while supporting high and rising living standards for local households. Globally competitive traded sectors, innovation ecosystems, and skilled labor are the key drivers of overall productivity, employment creation, and income growth. These drivers are supported by enablers: well-connected, spatially efficient infrastructure and a reliable governance structure and business environment. The Gauteng City-Region contains notable strengths and significant opportunities to better deploy these five factors to increase its global competitiveness.

The Gauteng City-Region is a major hub for global trade and investment, but its tradable economy is undergoing an industrial transformation. Trade and investment is becoming a more important component of economic growth for the Gauteng City-Region. Goods trade and national trade in services have grown much more quickly than the economy as a whole. Mining products continue to be the city-region’s fastest-growing export, riding a decade of Chinese demand. The city-region also maintains export specializations in manufacturing, especially machinery and transportation equipment products destined for the rest of Africa. Yet, these traded sectors have not generated employment growth over the past 15 years, which has been concentrated in services, especially business and financial services and communications, reflecting the city-region’s position as Africa’s de facto business and technology capital. Further confirming its hub status, the Gauteng City-Region ranks highly among its peers in foreign direct investment flows, especially in technology-intensive sectors. Leveraging its position as a major business center by boosting services exports can be a significant growth driver going forward. In a composite trade index, the city-region placed seventh among peers.

Anchored by leading universities, the Gauteng City-Region has many of the elements of a thriving innovation ecosystem, which can be bolstered by greater commercialization and entrepreneurship. The city-region’s two most highly-ranked research universities are significant hubs of knowledge creation and do a good job of collaborating with industry on joint research. Rates of new commercial inventions in the Gauteng City-Region fall in the middle of global peers, but patenting activity has declined recently. Entrepreneurship—an important innovation driver since new firms must offer the market some new product or process to thrive—is much higher in the region than in South Africa as a whole, but falls in the middle of global peer countries. Venture capital investment, one measure of the presence of high-growth entrepreneurs, is still quite low comparatively. In a composite innovation index, the city-region placed third among peers.

The skill levels of the region’s workforce have been increasing over time, but high and lasting unemployment remains a major challenge. The Gauteng City-Region’s
demographic dividend and steady flows of in-migrants ensure a growing supply of workers for the regional economy. Yet, currently workers are not being absorbed into the labor market at a sufficient scale and pace. Unemployment currently stands at 26.8 percent, highest among its global peer cities by a significant margin, and reflecting both demand-side and supply-side issues. Raising the long-term growth potential of the economy by improving industrial competitiveness would help address demand-side challenges. On the supply side, after decades of progress, the Gauteng City-Region’s workforce is more educated than the rest of South Africa and falls in the middle of its peer cities in terms of higher education completion. While closing over time, substantial education disparities between racial groups remain, underlying the skills mismatches between the workforce and the competencies demanded by new jobs. In a composite talent index, the city-region placed fourth among peers.

Firms and workers benefit from the Gauteng City-Region’s status as Africa’s most well-connected aviation hub, but the city-region’s digital connectivity lags global peer cities. South Africa’s freight and logistics systems rank in the middle of their peer group, but exporting costs remain relatively high for firms. The O.R. Tambo International Airport has positioned the city-region as an important international aviation node, offering a comparative advantage for businesses that demand global access. Local infrastructure can continually be upgraded. Broadband speeds have improved over time, but are not yet on-par with most global peer cities and remain varied across communities. Continuing local and provincial-led efforts to align transportation, new housing development, and land use policy to increase density along key corridors and nodes can help improve spatial efficiency. In a composite infrastructure index, the city-region placed seventh among peers.

The public sector has embraced government coordination at the city-region scale, a process that could be strengthened by further collaboration with the private and civil sectors. Two decades after adopting multiracial democracy, governance in South Africa continues to be a work in progress, and the Gauteng City-Region reflects this reality. The public sector’s commitment to improved service delivery and a more streamlined business environment have placed the city-region on-par with global peers on various governance metrics. Public perceptions about corruption remain a challenge, however. Building on relatively high fiscal autonomy, local governments have embraced coordination at a regional scale that reflects the true economic geography of Gauteng. This vision is an important step to further positioning the city-region’s economy globally, a process that could be strengthened by more input from private, civic, and educational groups.

The Gauteng City-Region has considerable competitive strengths. Building on strategies already underway at the municipal and provincial levels, the city-region can bolster this position by leveraging its distinct niche in services to cement its status as the trade and investment gateway to Africa, expanding technology commercialization, boosting employability through enhanced connections between the worlds of school and work, and organizing public, private, and civic leaders around a shared vision for growth and competitiveness. By taking purposeful action now, the Gauteng City-Region’s public, private, and civic institutions can build a globally competitive economy that works for all.

A conversation with Mohammed Adjei Sowah, mayor of Accra