Over the past year, the Common Core State Standards have risen from a topic of interest mainly to educators and school reformers to a top-tier issue in national politics. With likely Republican presidential candidates already staking out divergent positions, the standards and the federal government’s role in promoting them show strong signs of emerging as a key point of contention in the Republican primaries. How might this growing salience shape public opinion on the standards? A comparison of polls we’ve conducted nationally and in the state of Louisiana is instructive—and discouraging.

Several states have endured political battles over the Common Core State Standards, but none has matched the drama and intensity of Louisiana’s. Like most states, Louisiana adopted Common Core in 2010 without fanfare or controversy. The state began introducing the standards the following year with an eye toward full implementation this school year. At the time, the standards had the full-throated support of Republican Governor Bobby Jindal. Since then, Governor Jindal has positioned himself against the Common Core and his former ally, State Superintendent John White. In last year’s legislative session, Governor Jindal pushed bills to pull Louisiana out of the Common Core. When those efforts failed, largely due to the state’s powerful business lobby, the governor issued an executive order to pull the state out of a consortium of states using a Common Core-aligned test. After Superintendent White balked, arguing the governor lacked the legal authority to withdraw the state, Jindal joined a lawsuit against the state board of education (which has since been dismissed). The fray has been marked with recriminations and personal attacks befitting the political traditions of the Pelican State. Although a state court recently dismissed his lawsuit, Governor Jindal has announced plans to go after Common Core again in this year’s session.

Louisiana’s flare-up over Common Core is set upon a broader, national kindling of rising public discontent.  Last summer’s Education Next Poll of a representative sample of American adults showed that although a majority of the public supported the standards, that support had seriously eroded. In 2013, 65 percent of the general public favored the standards, but that portion fell to 53 percent in 2014 (see Figure 1).

Figure 1. Percent Supporting the Common Core State Standards, Overall and by Party, 2013 and 2014 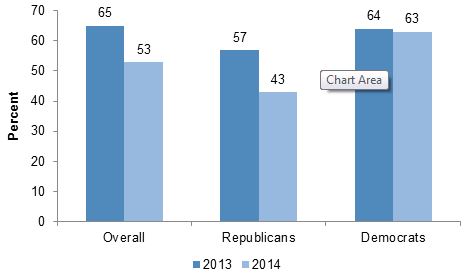 Note. The question read as follows: As you may know, in the last few years states have been deciding whether or not to use the Common Core, which are standards for reading and math that are the same across states. In the states that have these standards, they will be used to hold public schools accountable for their performance. Do you support or oppose the use of the Common Core in your state?

The Education Next poll revealed partisan polarization and widespread misperception, as well.  In the 2013 Education Next Poll, Common Core gathered backers from across the political spectrum. By 2014, support among Republicans fell from 57 percent to 43 percent, even as support among Democrats remained nearly unchanged (64 percent in 2013 and 63 percent in 2014). That year, the majority of respondents were misinformed on several important elements of the Common Core State Standards Initiative. Barely more than one third said it was false that the federal government requires all states to use the Common Core standards (it does not), just 15 percent said it was false that the federal government will receive detailed data on the test performance of individual students in participating states (it will not), and fewer than half said it was true that states and local school districts can decide which textbooks to use under Common Core (they can).

How does public opinion and understanding change when Common Core becomes a highly visible focal point—as has been the case in Louisiana? The extra attention given to the issue by political leaders and the press does not appear to resolve debates into consensus or clear up public confusion. If anything, it is quite the opposite.

When the Common Core label is dropped from the question, support for the concept leaps from 39 percent to 67 percent. With the label, a majority of the public (51 percent) opposes Common Core, but without the label a majority (67 percent) supports common math and reading standards (see Figure 2).

Figure 2. Percent Supporting the “Common Core” and “standards that are the same,” Louisiana (2015) and National Public (2014) 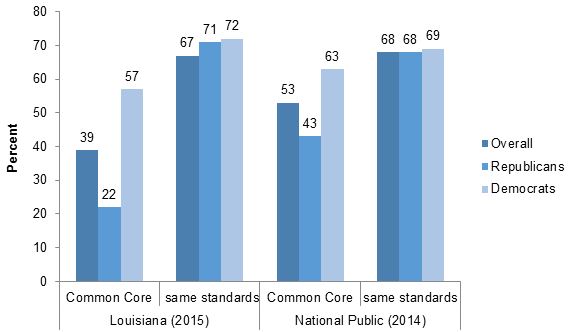 This labeling effect occurs despite the fact that people in Louisiana claim to be more informed about Common Core. In 2014 nearly half of the public (49 percent) described themselves as “very familiar” or “somewhat familiar” with Common Core. This year, 62 percent of Louisiana residents say they are “very familiar” or “somewhat familiar.” (By way of comparison, just 43 percent of Americans surveyed by Education Next in 2014 had even heard of Common Core; among those who had, a majority said they were “not very knowledgeable about it.”)

The toxic effect of the “Common Core” name is not a Louisiana phenomenon. The survey experiment in the Louisiana Survey is based upon a similar experiment in the 2014 Education Next Poll. When the “Common Core” label was dropped from the question in the national survey, support for the concept among the general public rose from 53 percent to 68 percent (see Figure 2). Additionally, the pronounced partisan polarization evoked by the label “Common Core” disappeared when the question did not include those seemingly toxic words. In other words, a broad consensus remains with respect to common standards, despite the fact that public debate over Common Core polarizes the public.

Could the choice of the name “Common Core” specifically explain these patterns? Conservative columnist Peggy Noonan wrote that it “sounds common—except for the part that sounds soviet.” It is possible that Republicans share her sensitivities. But we suspect that something deeper is at work. A similar dynamic was evident in public opinion on No Child Left Behind in the waning years of the George W. Bush administration. Support for the law dropped markedly in questions that referred to it by name, as compared to questions that used otherwise identical language to describe its key provisions. These effects were observed mainly among Democrats, suggesting that the law, despite its bipartisan roots, had come to be closely associated in the public mind with the Republican president. The consistency of patterns highlights a key tension facing education advocates seeking to use federal policy to advance their goals: Any benefits from federal involvement may come at the cost of heightened partisan polarization.

The Education Next and Louisiana Survey polls differ in timing, target population, and mode. Nevertheless, the pairing is suggestive. In Louisiana, where the fight over Common Core has been particularly salient, the effect of the “Common Core” label was even more negative than in the American public as whole, and the impact on polarization was greater. As the conflict heats up nationwide, the American public may move further from a latent consensus about common standards toward ever more confused divisions over “Common Core.”

The future of charter schools in the United States