The 2013 Economic Values Survey probed Americans’ views on capitalism, government, economic policy, and financial well-being. It found that Americans are concerned about the lack of jobs (26% cited this as the most important economic issue), the budget deficit (17%), and the rising cost of health care (18%) and education (9%). Overall, they are pessimistic about what the future holds. A majority (54%) believes that hard work and determination are no guarantee of success and, perhaps more alarming, a majority (52%) also believes their generation is better off financially than the next generation will be. 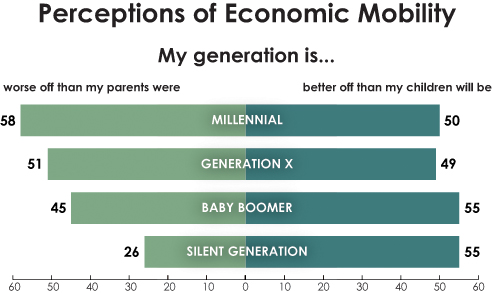 Despite these negative views of the economy and financial well-being, most Americans (54%) nonetheless believe that capitalism is working at least somewhat well. They don’t feel the same way about government, however. While more than 6-in-10 Americans agree that government should do more to reduce the gap between rich and poor, and that it is the responsibility of government to take care of those who cannot take care of themselves, roughly two-thirds say the federal government is broken. 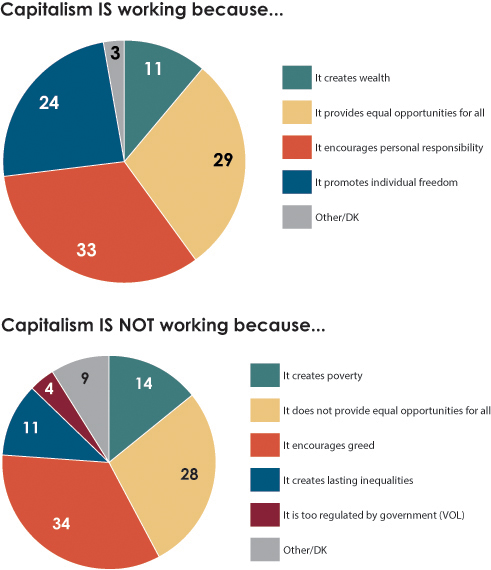 Yet the survey found some hopeful signs. Although polarization persists in many areas, there is broad consensus on the values that should guide the government’s economic policy. Approximately 8-in-10 Americans agree that promoting freedom and liberty, encouraging people to live more responsible lives, and promoting equality and fairness are important guiding values. More than two-thirds cite promoting a public safety net as an important guide.

The survey also developed a new religious orientation scale in order to explore differences and similarities among Americans of faith and to better understand the constituencies that make up the political parties. Among Republicans, most (56%) are religious conservatives and few (6%) are nonreligious; among Democrats, a larger portion (17%) is nonreligious, but a plurality identify as religious moderates (42%). 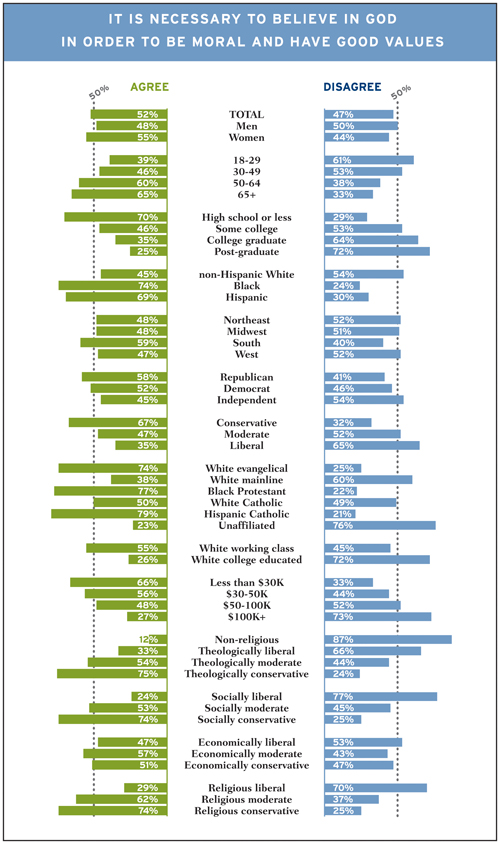 Members of these groups are also at odds about the degree to which social problems stem from individual actions and decisions. More than 8-in-10 religious conservatives agree that if enough people had a personal relationship with God, social problems would take care of themselves, but nearly 7-in-10 religious progressives disagree with that statement.

The survey was designed and conducted by Public Religion Research Institute in partnership with the Brookings Institution. Results of the survey were based on bilingual (Spanish and English) telephone interviews conducted between May 30, 2013 and June 16, 2013, among a random sample of 2,002 adults in the entire United States (800 respondents were interviewed on a cell phone).