Although 2016 marks the seventh year of the U.S. economy’s recovery from the Great Recession, large numbers of people and places have made limited progress, and economic uncertainties remain significant. To address these challenges and secure lasting, broad-based prosperity, we must harness the unique assets of our cities and metropolitan areas.

In 2016 and beyond, the Brookings Metropolitan Policy Program will help translate new evidence and ideas into tangible actions that enable our city and metropolitan leaders to build an advanced economy that works for all.

Several years after the end of the Great Recession, the work to rebuild the U.S. economy is incomplete. Since the official end of the recession in 2009: 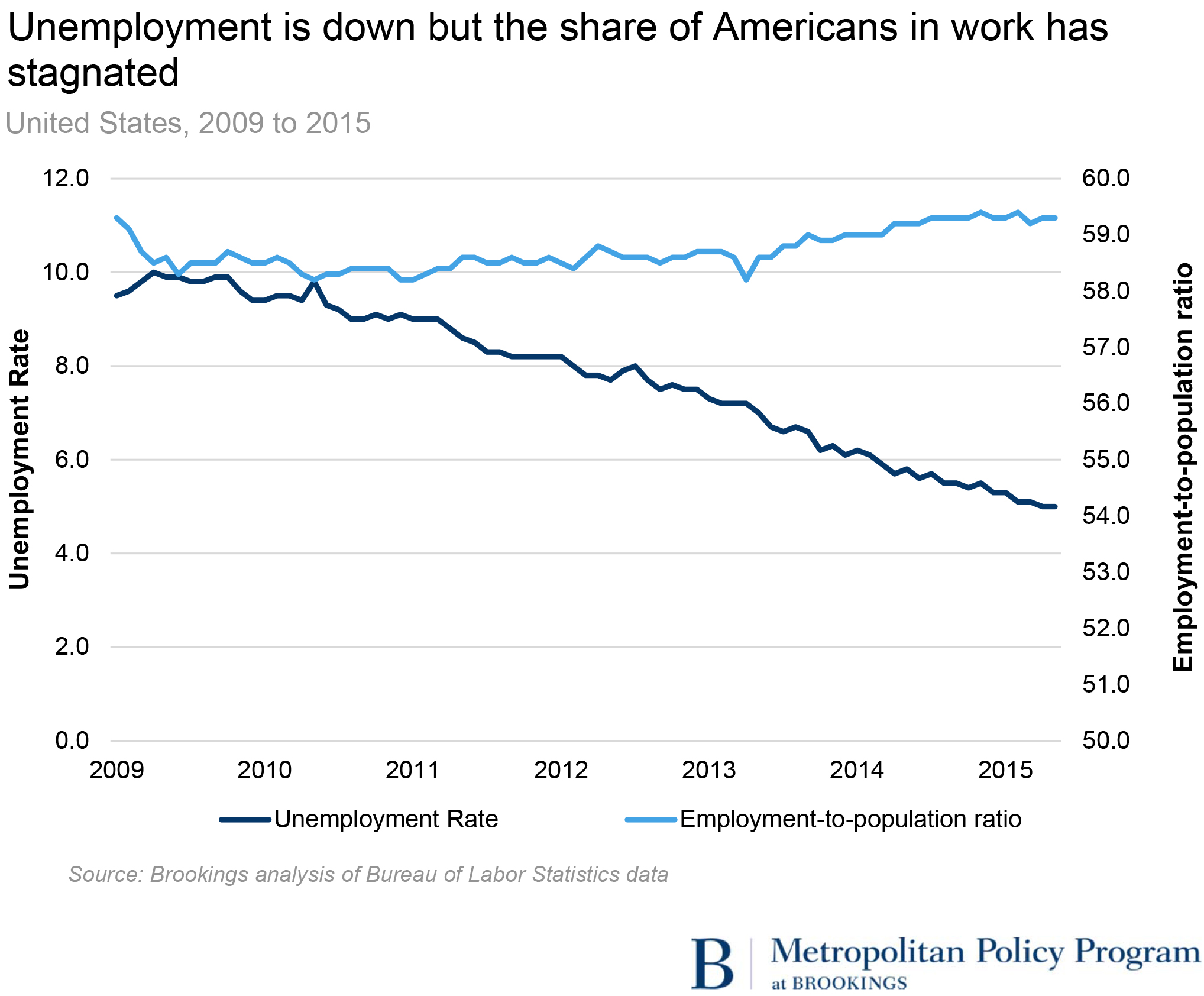 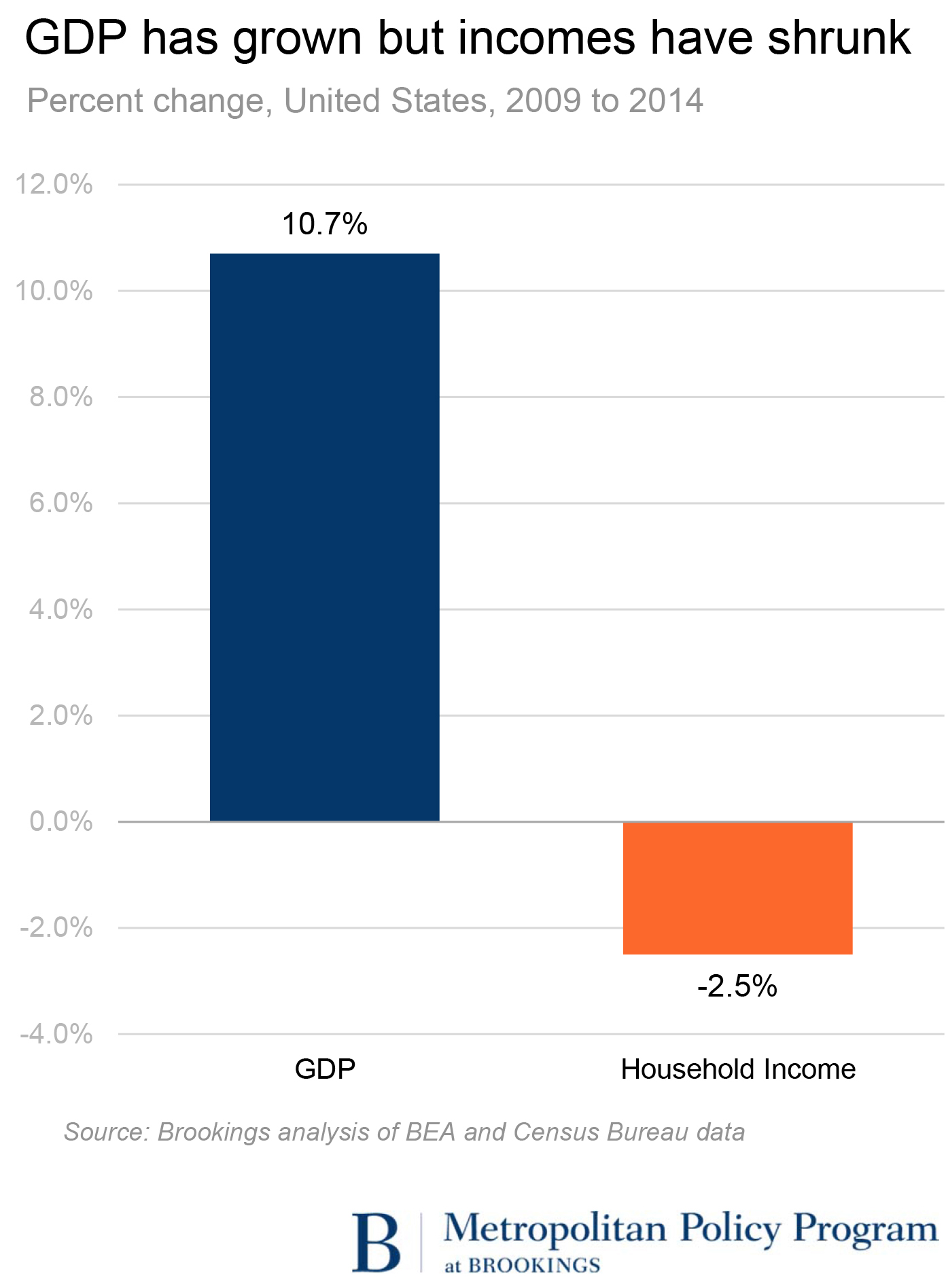 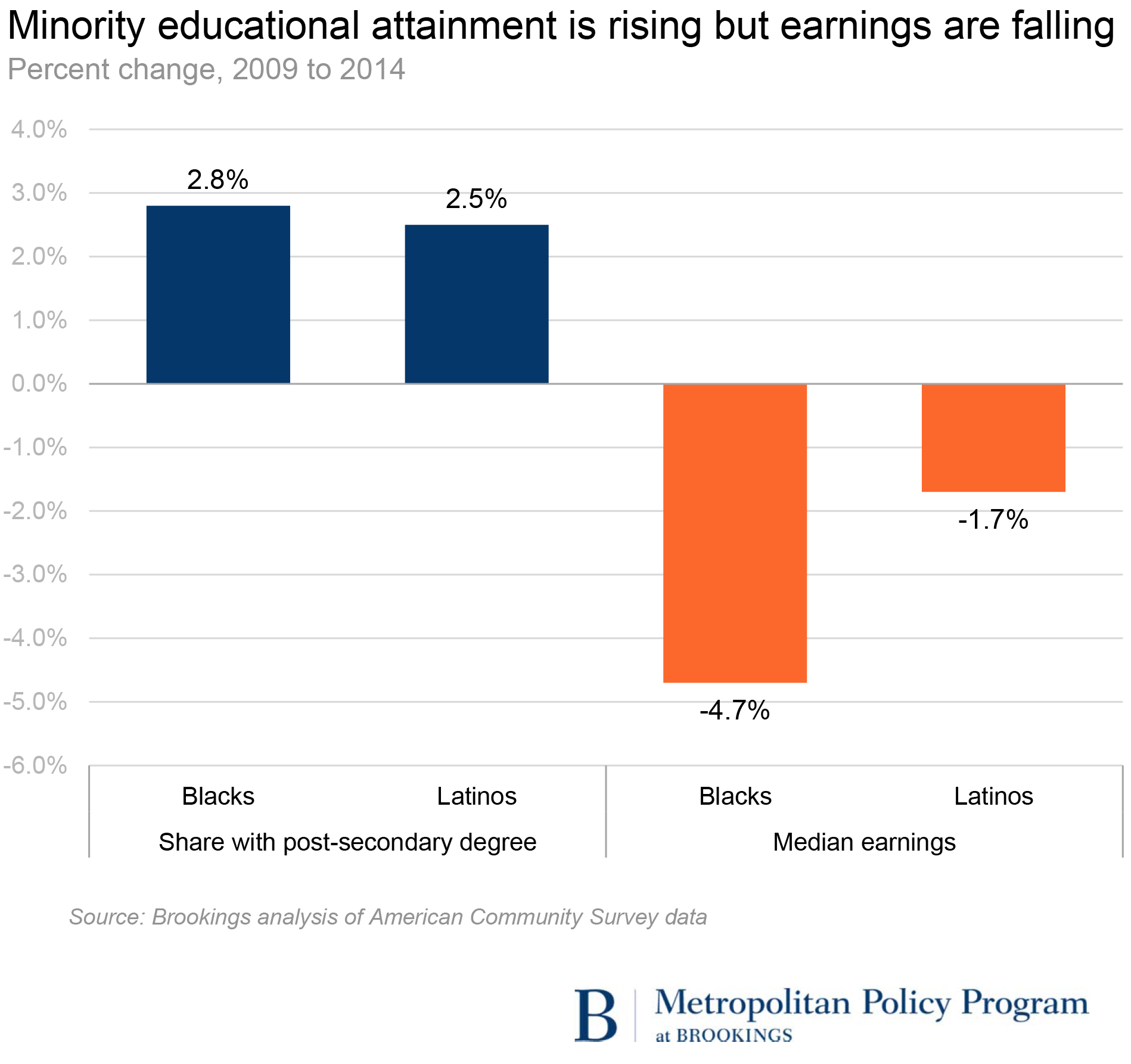 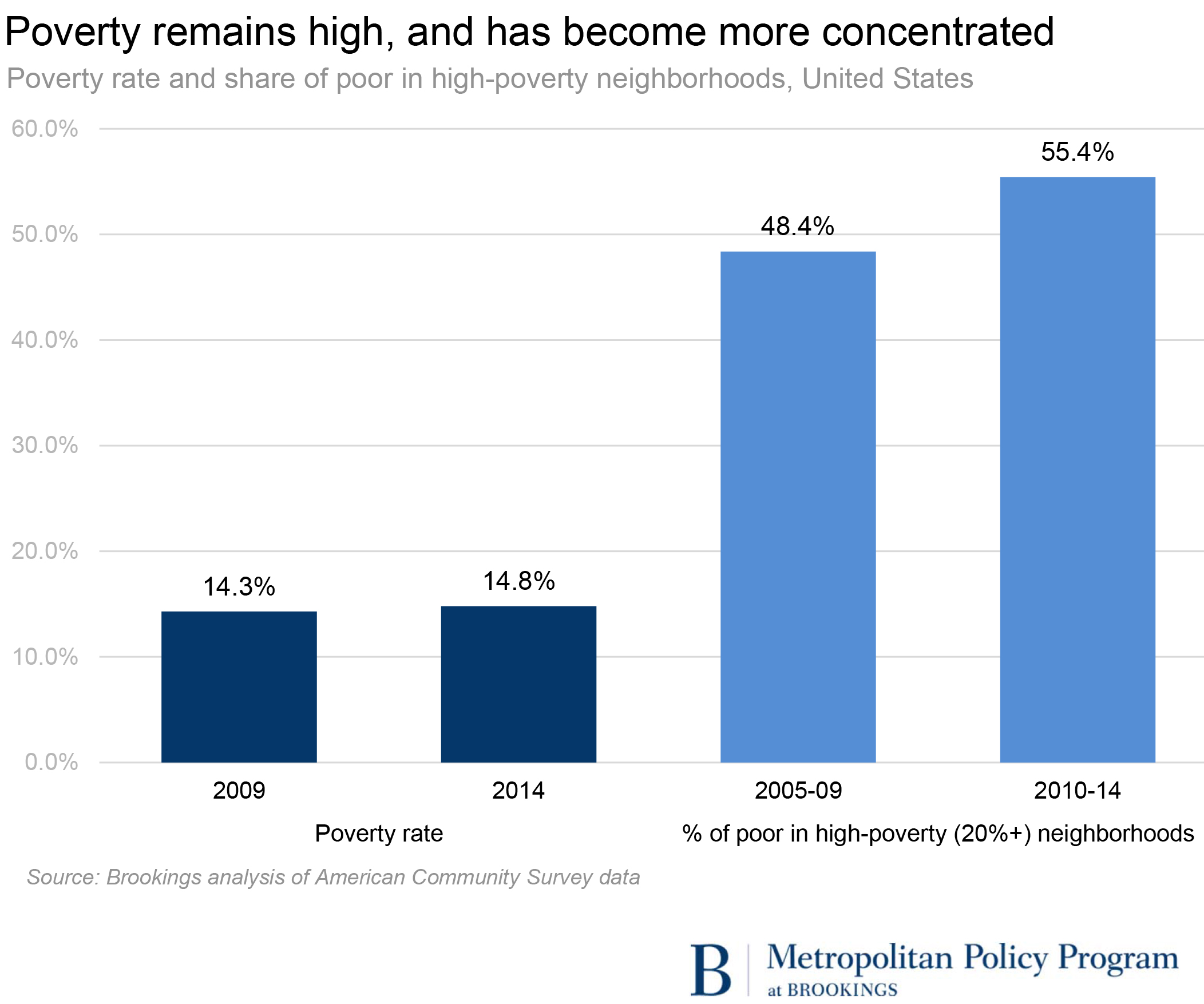 In short, economic growth is neither assured nor delivering results for enough people and communities.

Urgent efforts are needed to build a more lasting shared prosperity. Those efforts must confront four overarching trends that present both challenges and opportunities for achieving that goal:

Globalization: Even though the U.S. economy has outperformed many advanced and developing-economy peers in recent years, the IMF estimates that fully 86 percent of global economic growth over the next five years will occur outside the United States. This trend is vastly expanding the potential middle-class market for U.S.-produced goods and services, but also positioning many of those growing economies to compete more directly with U.S. firms and workers for investment and jobs.

Technological innovation: Advances in technology are occurring ever more rapidly, disrupting business models and consumer and labor markets. The McKinsey Global Institute estimates that 12 technologies including advanced robotics, the automation of knowledge work, and the “Internet of Things” could generate potential economic impact of up to $33 billion a year by 2025. Those same technologies, however, are creating new uncertainties for workers and the future of jobs. The institute estimates that automation alone could displace 10 to 15 percent of workers in middle-skill occupations over the next decade, doubling historical job displacement rates.

Demographic transformation: As Brookings’ Bill Frey has documented, the United States is undergoing a massive demographic shift in the first half of this century toward a majority non-white nation. This “diversity explosion” is yielding a younger population that can help balance our own segment of the world’s aging population, and provides tremendous potential for connecting our communities to opportunities in an increasingly globalized economy. At the same time, the transformation adds even greater urgency to narrowing stark racial and ethnic gaps in educational attainment and wealth that limit the social and economic progress of America’s future majority.

Federal constraints: Unrelenting political polarization in Washington, combined with a rising share of the budget devoted to mandatory programs and interest on the debt (a projected 77 percent by 2025), continue to squeeze federal investment in the fundamentals for inclusive growth and prosperity: innovation and trade, human capital, modern infrastructure, and supports for workers and families.

This mix of economic and political uncertainty requires a new approach, one that empowers metro areas to enhance the real drivers of economic growth while ensuring that growth benefits more people and places.

Our Mission and Vision

At the Metropolitan Policy Program, our mission is to deliver research and solutions that help cities and metropolitan areas build an advanced economy that works for all.

What does that economy look like? An advanced economy that works for all should achieve a higher trajectory of long-run growth, by improving the productivity of individuals and firms in ways that raise standards of living for all people, and reduce gaps by race, place, and income. We refer to these outcomes as growth, prosperity, and inclusion.

To realize those goals, we must empower cities and metropolitan areas, the true hubs of the national and global economy. Like all modern economies, the United States economy is actually a network of hundreds of distinctive metropolitan economies that combine cities, suburbs, and adjacent rural areas. The nation’s 100 largest metro economies alone sit on just one-eighth of U.S. land mass, but contain two-thirds of U.S. population and generate three-quarters of U.S. GDP.

Crucially, cities and metro areas concentrate the economic assets that provide the foundation for an advanced economy, one that embraces rather than avoids the challenges and opportunities described above. Cities and metro areas possess outsized shares of the advanced industries that drive innovation and productivity growth; the rich and diverse human capital that maximizes people’s potential and enables economic mobility; the modern infrastructure that protects the environment, facilitates economic activity, and improves access to opportunity; and the trading relationships that engage the global marketplace and generate local wealth. 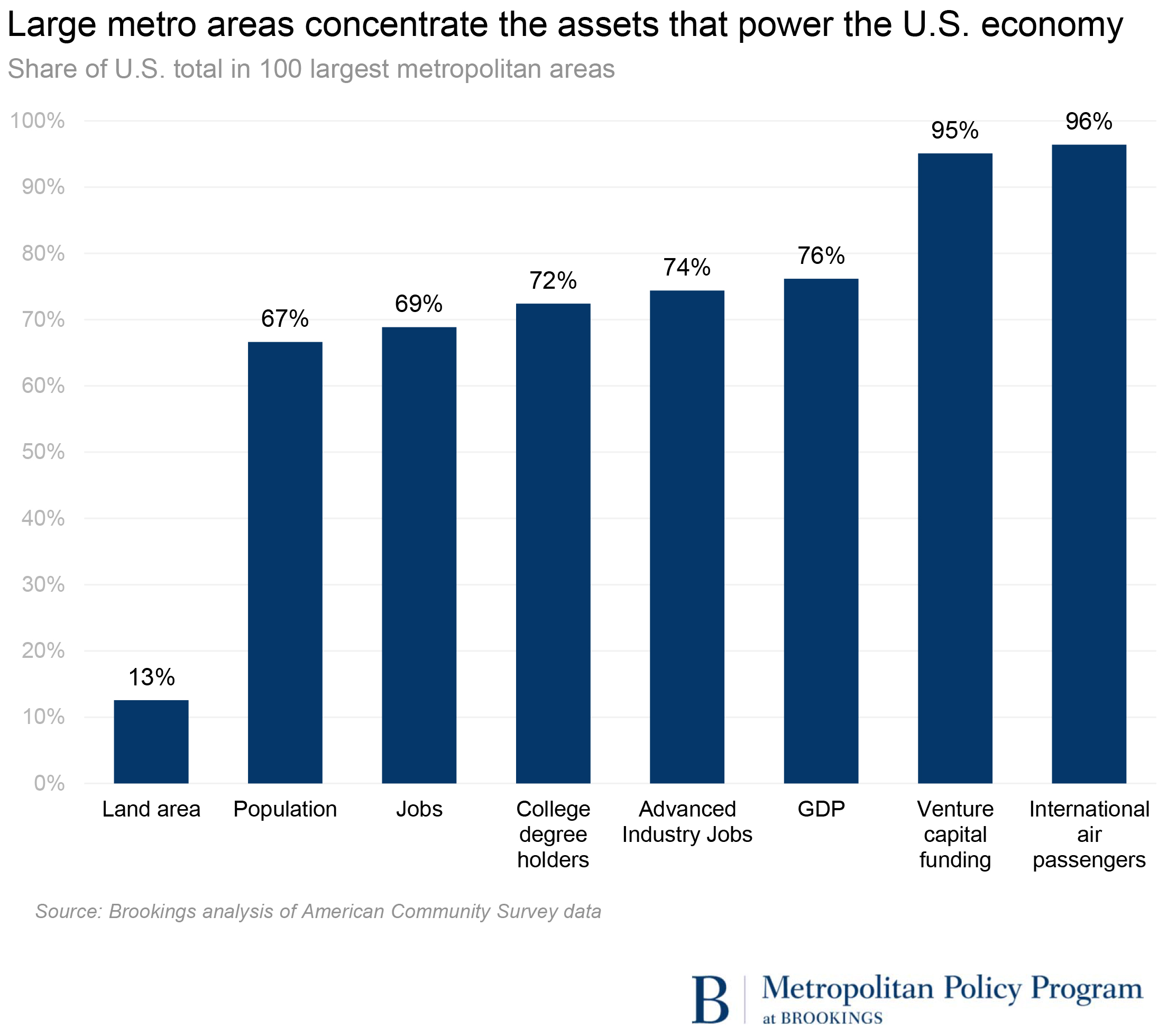 Leaders in metropolitan areas, moreover, are positioned best to align these assets to ensure that growth generates good jobs, rising incomes, and better opportunities for workers and families. The varied economic and social structures of metro areas mean that they respond differently to national and global forces; some metro economies, for instance, have emerged quite strongly during the recovery while others have struggled to regain their footing. What works for Phoenix may not be what works for Philadelphia. Macroeconomic policies alone are thus insufficiently tailored to the uneven geography of growth and opportunity. Instead, city and metro leaders must marshal the resources and flexibilities to help translate their unique market assets into an advanced economy that works for all.

Fortunately, networks of city and metro leaders, with their state partners, are already stepping up to the challenge. They include elected officials, innovative companies, universities and community colleges, regional chambers and business groups, labor unions, civic organizations, cultural institutions, and philanthropies. These leaders are investing to strengthen their competitive advantages in advanced manufacturing, energy, and services. They are acting globally, by connecting their firms and industries to markets abroad and aligning foreign investment to entrepreneurs and key industry clusters. They are forging employer-driven workforce strategies and helping high school and community college students attain industry-relevant credentials that lead to good jobs. And they are experimenting with new forms of governance and finance to modernize transit, ports, and broadband services that facilitate economic growth and access to opportunity.

Thanks in part to these efforts, population and jobs in many large cities and urban areas are now expanding faster than they have in decades. Yet progress is uneven, and outdated approaches to fostering growth remain widespread. To successfully navigate a volatile period for the global economy and society, we must stimulate and accelerate innovative efforts underway in cities and metro areas to build lasting, broad-based prosperity.

To build an advanced economy that works for all, the Metro Program aims to help city and metro leaders:

We provide leaders in cities and metro areas with a range of tools to achieve those goals, from empirical research, to practical on-the-ground insights, to platforms for testing and scaling solutions with public- and private-sector partners at all levels.

In 2016 and beyond, the Metro Program will use these tools to answer critical questions and spur productive actions that help leaders in cities and metro areas navigate disruptive change and achieve economic growth, prosperity, and inclusion. We will:

Provide frameworks and data for understanding an advanced economy that works for all. Through our empirical research and strategic communications, we will help national decision makers understand the economy through a metropolitan lens, and help regional leaders understand how their metro trends relate to the national and global context, by doing three things: (1) measuring U.S. metro areas’ performance on economic growth, prosperity, and inclusion; (2) benchmarking selected international metro areas’ global competitiveness and connections; and (3) providing accessible, tailored metro data on key assets and attributes of metro economies, such as:

Establish platforms for leaders to experiment, network, and spur supportive changes in practice and policy. Through partnerships, policy analysis, and convening, we will help spread and scale innovations that empower regional leaders to achieve an advanced economy that works for all, by:

In all of these efforts, the Metro Program will build upon our active work and close relationships with leaders in more than 30 U.S. cities and metropolitan areas, their counterparts in a growing number of international cities, leaders in more than a dozen states, and key audiences at the national level to do what Brookings does best: translate evidence and ideas into tangible actions that address our society’s greatest challenges and ensure a more prosperous future for all its citizens.

Doubling down on city competitiveness for COVID-19 recovery