The U.S. economy is getting better. Why are Americans so unconvinced of that?

The jobless rate in October fell to 5.8%, the lowest since July 2008, and the broader measure (which includes discouraged workers and the like) is down to 11.5%, the lowest since September 2008. The economy has added 2.6 million jobs in the past year, nearly 2 million of them in the private sector. 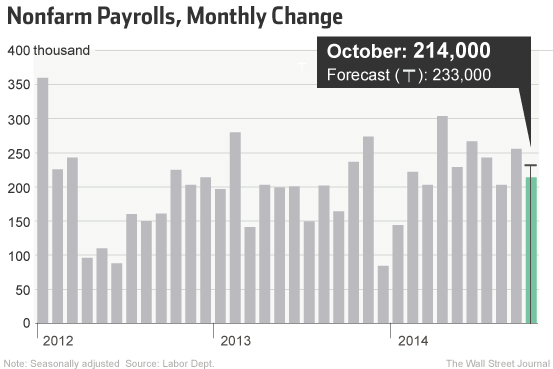 One, there is always a lag between improvements in the economy and people’s perception of it. Ask George H. W. Bush about that.

Two, the economy is better but still far from great. Friday’s jobs report counted more than 7 million people who worked part time in October because they couldn’t find full-time work. That figure is down by 1 million over the past year but still 2 million above pre-recession levels. Among men ages 25 to 54, the prime working ages, one in six (16.1%) wasn’t working in October; some were looking for work, but some were “retired” or “disabled.” 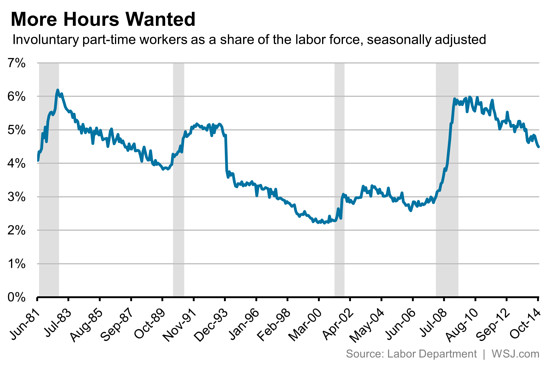 Three, for those who are working, raises are scarce. Friday’s report said that average hourly earnings are up 1.9% over the past year; average weekly paychecks up 2.5%. Now that’s a bit better than inflation–the consumer price index is up 1.7% over the past year–but not much, and it comes after some pretty lean years. Maybe an improving job market would soon push wages up (and there are a few tantalizing hints of that), but workers have reason to be unhappy.

Four, the economy is recovering from a severe heart attack, and people are now focusing on the chronic disease: the stagnation of wages and incomes in the middle, the widening gap between winners and losers, and prospects for the next generations. Exit polls this week found that half the voters expect life for the next generation of Americans to be worse than for the current generation; that’s more doubt than at any time since the question was first posed in exit polls in 1996. Broader public opinion polls (ones that survey people who don’t vote, too) find even more pessimism. An August WSJ/NBC News poll found that 76% of adults doubt their children’s generation will have a better life than they do.