For the first third of this decade, big city population growth continues to outpace the rates of 2000 through 2010, according to new data released by the Census Bureau. It raises the question: Is this city growth revival here to stay? Or, is it a lingering symptom of the recession, mortgage meltdown and the plight of still stuck in place young adults? The new statistics, which update city populations through July 2013, give some credence to both theories.

On the positive side for urban boosters, the numbers show that many cities have gained more people in the three-plus years since the 2010 Census than they gained for the entire previous decade. This includes three of the five largest cities, New York, Philadelphia and Chicago (which lost population in the previous decade). Among the 25 largest cities, nine are already ahead of their previous decade’s gains, including Dallas, Denver, Memphis, San Francisco, San Jose and Washington, D.C. (See table)

Still another positive indicator for big cities is their growth rates. For each of the last three years, cities with populations exceeding 250,000 grew at rates exceeding 1 percent—far higher than their average annual rate of 0.49 percent over the 2000-2010 decade (Figure 1). Among the fastest growing, with rates exceeding 2 percent are Seattle, Austin, Charlotte, Denver and Washington D.C., each with new knowledge based economies and high amenity downtowns. 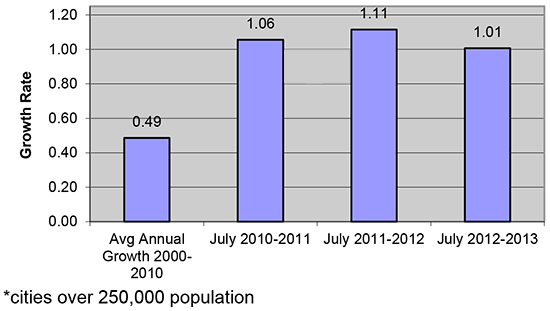 Yet, despite the overall gains, growth rates slowed in the most recent year for 45 of the 77 cities over 250,000 in population, but for the most part, the growth rate declines were less than 0.5 percent

In the city versus suburb realm, the new numbers once again affirm a reversal that counters decades of suburban-dominated regional growth among metro areas with more than 1 million people. Now, for three years running, primary cities are growing faster than their suburbs (See Figure 2).

From 2000 to 2010 as with many prior years, suburban growth substantially exceeded that of primary cities. This changed in the each of the three subsequent years. In 2012-2013, 19 of the 51 major metropolitan areas showed faster primary city than suburb growth including New York, Washington D.C., Denver and Seattle. (See table) 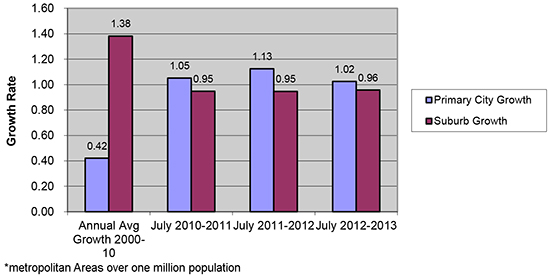 Still, the new numbers for 2012-13, suggest a closing of the city-suburb growth gap with the small downtick in city growth and an even tinier suburban growth uptick. This modest suburban growth rise is reinforced by a separate updated analysis of exurban counties that showed their population growth rise from a low 0.4 percent in 2011-2012 to 0.6 percent in 2012-2013. This is still well below the exurban growth rates of around 2 percent during the high suburbanization years in the middle of last decade.

So where are cities headed for the rest of the decade? This initial city growth upsurge could well be attributable to recession’s aftermath and the suburban housing market slowdown. If that were the case, then the  newly reported city growth slowdown and modest exurban gains could  signal that past suburban growth patterns are re-emerging.

Yet city growth levels remain strong by the standards of recent history. Moreover, the cities that are growing most rapidly are located in areas with economies and amenities that are attractive to millennials, graduates and young professionals, who make up a growing portion of potential movers. So while it is too soon to anoint this the “decade of the city,” the persistence of big city growth is hard to ignore.