While it has been assumed that fiscal stimulus works mostly by spurring spending among the poorest households who need the extra cash the most (the “poor-hand-to-mouth”), another group of consumers – the “wealthy-hand-to-mouth” – also consume all of their disposable income every period. The findings are important for policymakers, given the question of which demographic groups to target in order to obtain the biggest bang-for-the-buck from fiscal stimulus programs designed during economic contractions. The research found that while wealthy hand-to-mouth and poor hand-to-mouth households increase their spending by similar amounts in response to small stimulus payments, the wealthy hand-to-mouth continue to ramp up their consumption much less than the poor-hand-to-mouth as the size of the stimulus payments are increased. 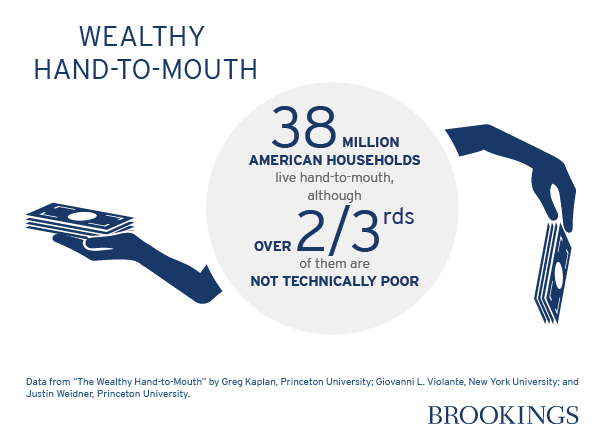 In “The Wealthy-Hand-to-Mouth,” authors Greg Kaplan of Princeton University, Giovanni Violante of New York University and Justin Weidner of Princeton University find that both the wealthy hand-to-mouth (those with little or no liquid wealth but substantial holdings of illiquid assets – those that carry a transaction cost to access, such as housing, large durables, or retirement accounts, as opposed to liquid cash, checking, and saving accounts), and the “poor-hand-to-mouth” behave similarly: both groups have “large marginal propensities to consume out of small income changes – a key determinant of the macroeconomic effects of fiscal policy,” they write. The wealthy-hand-to-mouth choose to weather income fluctuations rather than dipping into their assets to smooth shocks , because smoothing shocks would entail holding large balances of cash and foregoing the high return on their illiquid assets.

The authors then compare households in the US to Canada, Australia, the UK, Germany, France, Italy, and Spain to document the share of the wealthy-hand-to-mouth households across countries, their demographic characteristics, the composition of their balance sheets, and how long families remain hand-to-mouth.

There are striking parallels among hand-to-mouth households in the US, Canada and the UK, with those three countries having the biggest fraction of both poor- and wealthy-hand-to-mouth. Australia, on the other hand, is somewhat of an outlier among the Anglo-Saxon countries since they have almost no poor-hand-to-mouth households whereas over 20 percent of the population are wealthy-hand-to-mouth. This is due to the very high fraction (85 percent) of the Australian population that has retirement accounts, thanks to a government requirement that makes all employers to contribute to them on behalf of their workers.

Looking at Europe, all countries studied have smaller fractions of both types of hand-to-mouth households than the US, Canada and UK, and hold lower liquid debt. The authors posit that tighter limits on unsecured credit in Europe mean that households there are more incentivized to hold liquid wealth for transactions and precautionary reasons. Unsecured credit is less easily substituted for liquid wealth in Italy, and to a lesser extend in Germany France and Spain than in the Anglo-Saxon countries.