In “Dynamic Scoring”: Why and How to Include Macroeconomic Effects in Budgetary Estimates for Legislative Proposals, Elmendorf, now a Visiting Fellow in Economic Studies at Brookings, notes the critical role the Congressional Budget Office (CBO) and Joint Committee on Taxation’s (JCT) “scores” – or estimated budgetary costs of proposed legislation -- play in not only Congressional deliberations but also in public discourse.

Congress’ use of dynamic scoring — including in budget estimates the effects of legislation on overall output, employment, and similar variables – will give lawmakers important additional information about policies, but it needs to be used judiciously, according to a paper by former CBO Director Douglas Elmendorf.

In “‘Dynamic Scoring’: Why and How to Include Macroeconomic Effects in Budgetary Estimates for Legislative Proposals,” Elmendorf, now a Visiting Fellow in Economic Studies at Brookings, notes the critical role the CBO and JCT “scores” – or estimated budgetary costs of proposed legislation — play in not only Congressional deliberations but also in public discourse. Earlier this year, a rule adopted by the House of Representatives and the budget resolution approved by the House and the Senate called for dynamic scoring in certain circumstances. That approach has been used recently in the estimate for the two-year restoration, passed by the Senate Finance Committee in July, of dozens of tax cuts that expired at the end of 2014; JCT found that the macroeconomic effects of that two-year extension would reduce the measure’s cost by over $10 billion. 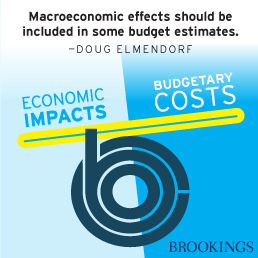 Elmendorf concludes that dynamic scoring would be appropriate if macroeconomic effects are only included in estimates for major legislative proposals, because CBO and JCT do not have the resources to do a careful analysis of most proposals. He suggests dynamically scoring bills whose non-dynamic effects would exceed .25 percent or more of GDP over 10-years, which would be those having a budget impact of $575 billion and above, and bills for which dynamic scoring is requested by the chairs or ranking members of the key committees. He also believes dynamic scoring should be used for legislative proposals affecting federal spending as well as revenues, because both sorts of policy changes can have notable macroeconomic effects.

Elmendorf stresses that CBO and JCT, both considered independent and apolitical entities, be allowed to exercise their independent judgment in forming estimates of macroeconomic effects, including deciding in some cases not to provide such estimates because they do not have the tools or time needed. And he advocates for CBO and JCT’s greater analysis of the distributional effects of proposals so that policymakers have a better sense of the tradeoffs between overall income and the distribution of income – how legislation affects people differently based on their income levels.

Elmendorf addresses five concerns about using dynamic scoring. First, he does not believe CBO or JCT’s use of dynamic scoring would lead to excessive pressure for them to put forward rosy scenarios, as some have argued, given that both organizations have withstood political pressure for decades.

Second, while macroeconomic effects of bills are uncertain, so are non-macro ones. Third, although some question whether dynamic scoring could tilt the balance more in favor of tax cuts compared to spending increases, leaving out macroeconomic effects could cause a tilt the other way; Elmendorf believes JCT and CBO should apply the same approach to the macroeconomic effects of proposals to change both federal spending and revenues. Fourth, while CBO and JCT may have some difficulty in modeling the macroeconomic effects of legislative proposals to account for expectations of future fiscal policy, those expectations are frequently left aside in other economic analyses, and CBO and JCT have straightforward ways to handle this challenge in their estimates. And fifth, dynamic scoring does not necessarily make budget estimates less cautious in the sense of lowering their apparent budgetary cost, nor should CBO and JCT aim to provide estimates that are cautious in this sense.