The Organization for Economic Co-operation and Development (OECD) finds that, in OECD member countries, the top 10 percent of earners now make 9.6 times the income of the poorest 10 percent, up significantly from the 7 to 1 ratio experienced during the 1980s. They estimate that this increased inequality reduced cumulative GDP growth by 4.7 percentage points between 1990 and 2010, and suggest that policymakers should expand education and skills programs and implement more effective tax-and transfer systems.

Using data from 1979 to 2012, Evgenia Passari of the Universite Paris Dauphine and Hélène Rey of the London Business School find that a 0.17 percentage point increase in the U.S. one-year treasury rate leads to a 0.12 percentage point increase in the U.K. mortgage rate spread and increases market volatility. This suggests that floating exchange rate regimes may not be as insulated from foreign monetary policy shocks as previously believed.

Republicans and suburbanites most likely to oppose publicly funded pre-K

Matthew E. Kahn and Kyle Barron of UCLA, examining referenda results on increased pre-K spending, find that minority, low-income and inner-city voters and renters are most likely to support more public funding for pre-K. Republicans and suburban voters are more often opposed. The authors suggest suburbanites may have access to quality pre-K or perceive the quality of the publicly provided programs to be lower and Republican opposition may reflect perceived inefficiency or concern over expanding the size of the state.

Chart of the week: Health Insurance 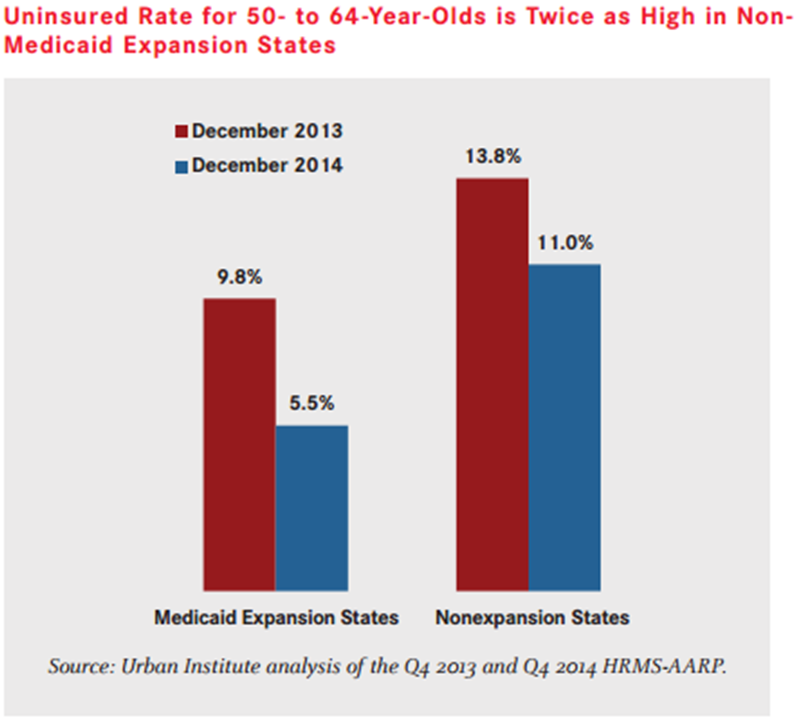 Quote of the week: ECB actions have reduced fears of a euro area split

Two or three years ago, there was widespread skepticism on the western shores of the Atlantic and the English Channel about the viability of the monetary union, and there was much discussion of what would happen after the breakup of the present euro area…With one sentence–the sentence that included the words “whatever it takes”—that skepticism was largely, though not totally, erased. With one decision–the decision to implement QE–it became clear that the ECB has the capacity both to decide to implement monetary policy at the zero lower bound—indeed below the zero lower bound—and to succeed in implementing that policy.

—Stanley Fischer, Vice Chairman of the Federal Reserve Board