The High Cost of Obesity on Government Budgets
America’s struggles with obesity are well-documented. Over the past 50 years, the share of obese adults gradually climbed from just one-in-eight in 1960 to over one-in-three today. In 2011–2012, obesity plagued 17 percent of American children and a shocking 35 percent of American adults—the highest adult obesity rate among developed countries. Unfortunately, the obesity epidemic shows no signs of abating: one report estimated that 44 percent of American adults will suffer from obesity by 2030.

One chief concern with our nation’s soaring obesity rates is the enormous pressure it places on health care spending. Although the magnitude of the estimated costs varies, a host of studies found the impact to be large. A study published by the Journal of Health Economics found that 20.6 percent of U.S. national medical spending—roughly $200 billion in 2005 dollars—was due to obesity, equal to over $2,700 in additional spending per person per year. Another article in Health Affairs estimated that over a quarter of the per capita growth in health care spending between 1987 and 2001 was due to obesity.

The high cost of obesity on medical spending has serious implications for federal and state budgets. One study found that in 2006 the additional Medicare spending due to obesity was estimated at over $1,700 per beneficiary (in 2008 inflation-adjusted dollars), while Medicaid spending due to obesity was measured at $1,021 per beneficiary—a more than three-fold inflation-adjusted rise since 1998.

These high obesity-related costs have materialized at a time when public spending on health care is soaring. Between 1974 and 2014, federal spending on major health programs rose from 1.0 percent of GDP to 4.8 percent and the Congressional Budget Office projects that this spending will rise to 6.1 percent of GDP by 2024. The high share of fiscal resources devoted to health spending suggests that investment in initiatives to curb the growth in obesity-driven health costs may be one strategy for reducing government deficits.

At the state-level, a substantial share —between 6 percent and 20 percent—of Medicaid spending goes to adult obesity-related expenditures. In 2006, Oregon (18.8 percent), Arizona (17.0 percent) and Colorado (16.2 percent) saw the highest shares, while Kansas (6.5 percent), Virginia (6.8 percent) and North Dakota (7.5 percent) devoted the smallest shares of Medicaid spending to obesity-related expenditures. On a state-by-state basis, Medicare spending due to obesity was substantial, too, with shares varying from 5.2 percent to 10.2 percent in 2004. The highest percent of obesity-attributable spending was found in Ohio (10.2 percent), Michigan (10.0 percent) and West Virginia (9.9 percent), while the lowest was in Hawaii (5.2 percent), Arizona (6.2 percent), and New Mexico (6.6 percent).

One major cost stemming from the obesity epidemic is higher spending on Medicare and Medicaid. In these programs combined, obesity raised expenditures by over $90 billion in 2012, making obesity-related spending an important driver of state and federal fiscal pressures. These high fiscal costs also suggest that initiatives to prevent and reduce obesity should be a public-sector priority, as lower obesity can not only improve Americans’ health but also substantially lower government spending on health programs. 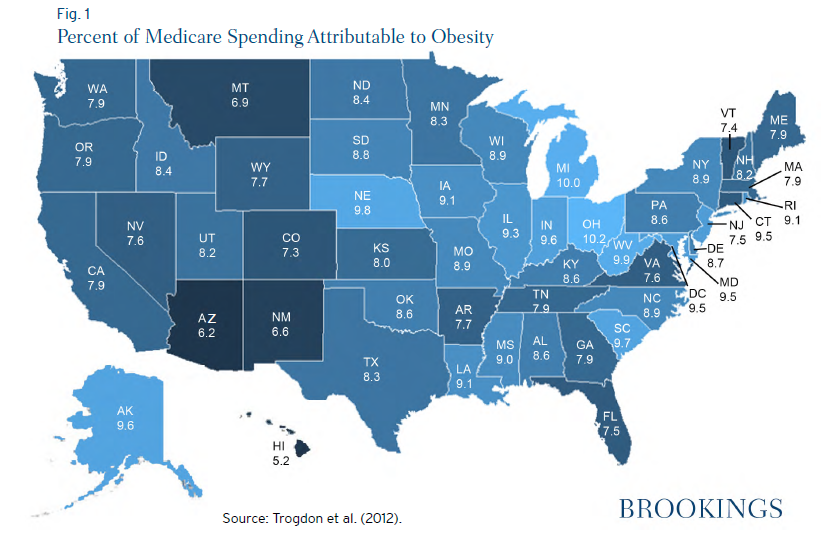 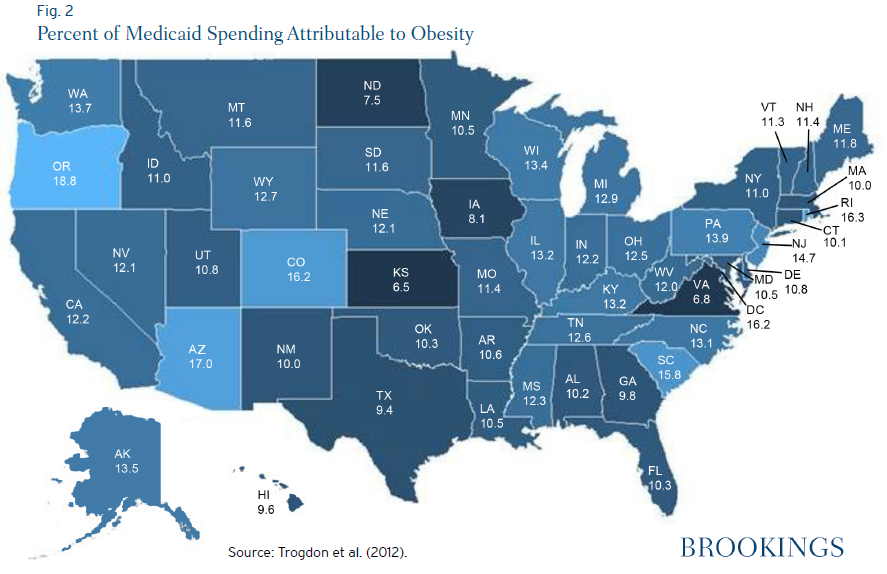 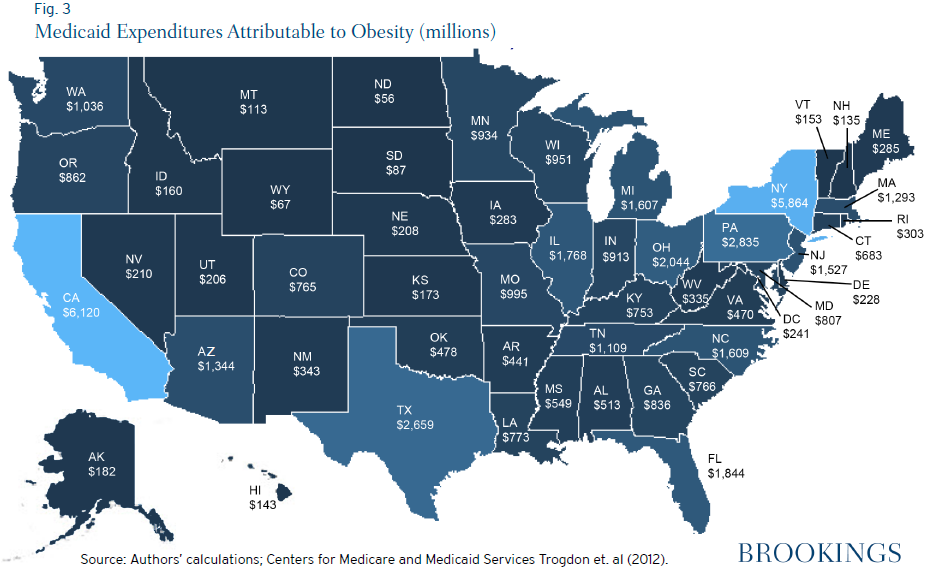 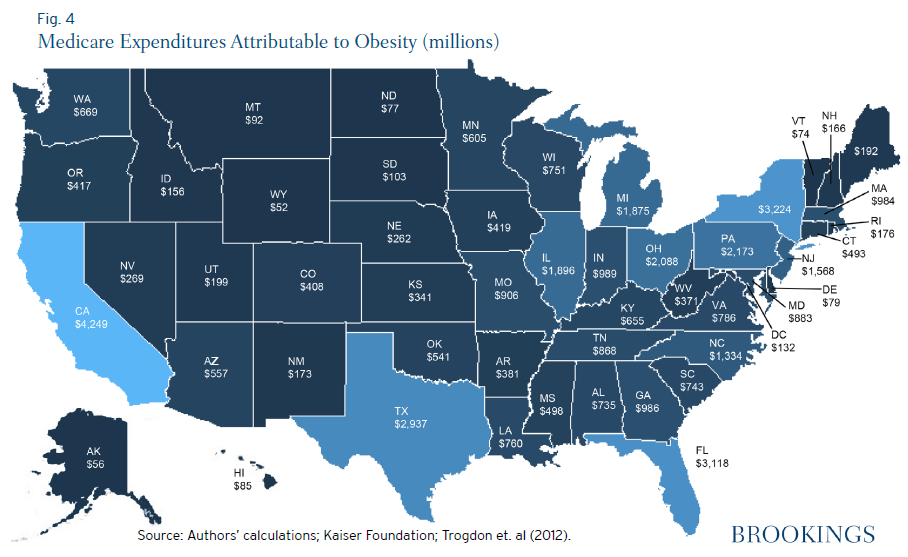 [1] To estimate state-level Medicare spending in 2012, we inflate Centers for Medicare and Medicaid Services data from 2009 by the Personal Consumption Expenditure Price Index for Health Care. State-level Medicaid spending data were derived from the Kaiser Foundation [http://kff.org/medicaid/state-indicator/total-medicaid-spending/].