Headlines abound of markets reacting negatively to positive economic data which imply that the Fed will ease up on its ultra-accommodative monetary policy, even as soon as this week’s FOMC meeting. Yet why should financial markets react negatively to improving economic fundamentals? There are two strands to this argument. First, that interest rates will rise making bonds more attractive and stocks less attractive. Furthermore, future cash flows will be discounted by a higher interest rate lowering the net present value of those cash flows. The second argument is that markets have been fueled by Fed liquidity provision and the removal of that liquidity will lead to market declines.

I understand the first argument. By lowering interest rates and expanding its balance sheet through the purchase of longer-dated Treasuries and mortgage backed securities, the Fed has been encouraging market participants to take more risk. However, the prospect of higher interest rates in the context of stronger economic activity and likely healthy profit growth means that the numerator, expected cash flows, should likely rise as well (Figure 1).[1] 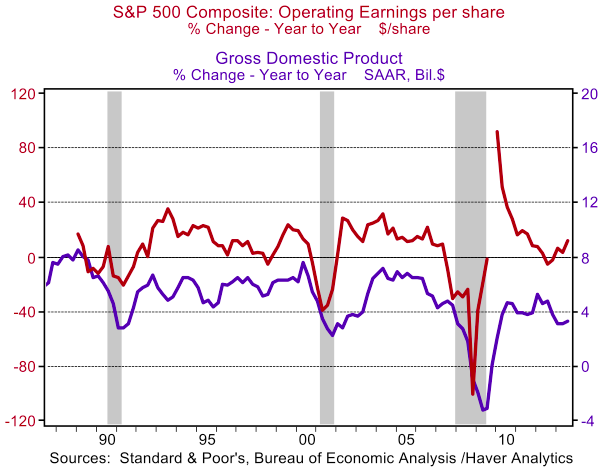 The liquidity-fueled market argument is much more difficult to understand. It’s not clear what market participants mean by liquidity. They point to the growing size of the Fed’s balance sheet; the excess reserves that the Fed has created well beyond what is needed by banks. (Figure 2). The problem is that banks aren’t lending those reserves out (Figure 3), which is why the Fed continues to expand its balance sheet. It’s the equivalent of Bernanke’s helicopter drop of money being put under the mattress. If the money is spent it will fuel growth and inflation, but if it sits under a mattress it will have limited economic impact. If the Fed’s reserve creation isn’t leaking into the broader measures of money or lending, why should market participants fear a slowdown in reserve creation, which is what tapering of Treasury and MBS purchases would do. 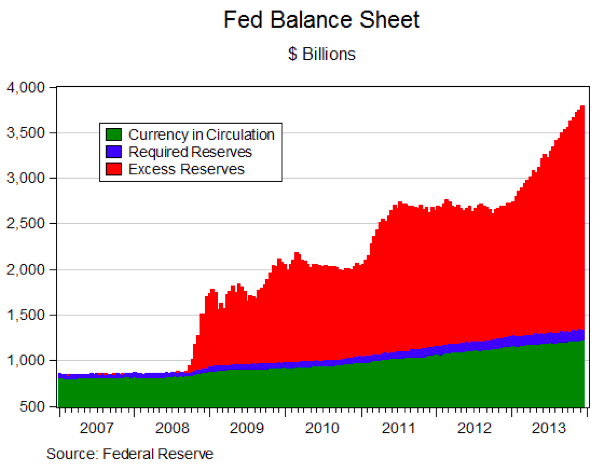 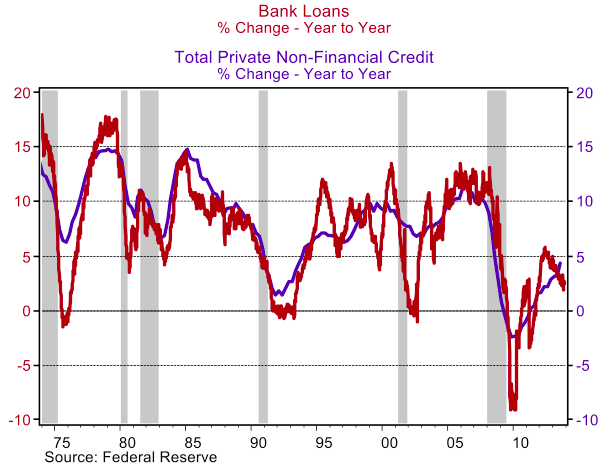 Perhaps the liquidity market participants are referring to are investment flows into equities? However, until the spring equities were rallying despite the fact that money was flowing out of U.S. equity mutual funds. Over the last six months equity inflows are barely positive (Figure 4).[2] Meanwhile, though interest rates were at levels not seen for generations, until recently money had been flowing into U.S. bond funds. As a result of the search for yield, investors have flocked into riskier emerging market equities and higher yielding bonds (Figure 5). Thus if there has been a liquidity driven bubble, perhaps it is in U.S. and global bonds or emerging market equities. 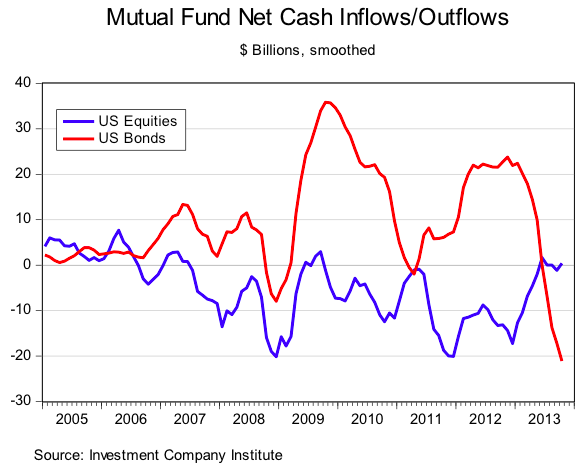 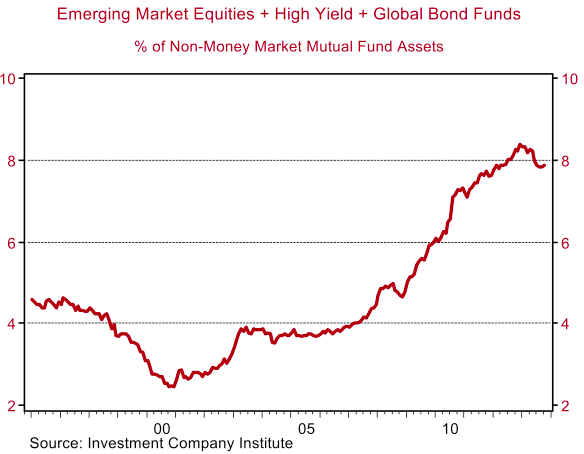 Maybe this is what market participants fear; a bond market rout which will carry over into the equity market. There is the risk that interest rates on the very long end of the yield curve, in particular maturities longer than ten years, could move substantially higher as expectations about economic growth and equilibrium interest rates get revised higher. However, shorter-term interest rates are likely to stay near zero as the Fed is expected to be very cautious about raising rates. If their forward guidance is to be believed, they will also be very slow to raise rates once they begin a tightening cycle (Figure 6 below illustrates the FOMC’s expected path of Fed rate hikes – each dot represents an FOMC member’s view of the target federal funds rate at year-end).[3] 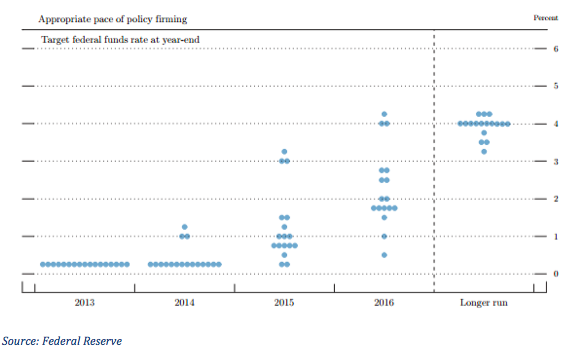 What would happen if the economy started firing on all cylinders, eating into the significant amount of slack that exists, and the Fed began tightening sooner than markets expect? The experience of 1993-94 when long-term interest rates jumped is instructive. The recovery following the Savings and Loan crises of the late 1980s was extremely sluggish and the Fed cut the federal funds rate to 3%, a level not seen in a generation, with real or inflation-adjusted interest rates hovering around 0%. Similar to today, markets were nervous about the prospect of policy stimulus being removed. After a spate of strong economic data in late 1993-early 1994, the Fed started raising rates in February 1994. The economy continued to strengthen and the Fed found itself behind the curve with the need to raise rates very quickly. By the end of 1994, the funds rate was 5.5%, and by February 1995, it peaked at 6%. Within one year, the Fed had raised rates by three percentage points (Figure 7)! 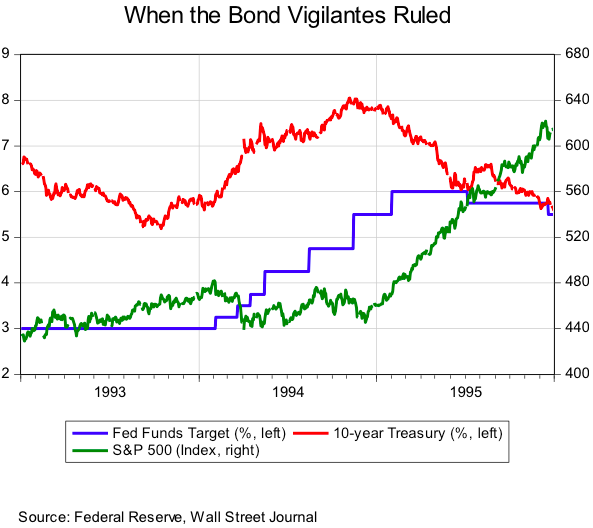 Owners of longer-term Treasuries got hit hard with yields rising over two percentage points. This translated into capital losses of over 10% for holders of 10-year Treasuries and over 15% for holders of 30-year Treasuries. As a result of trades betting interest rates would stay low a number of money market mutual funds had to have cash infusions to avoid “breaking the buck” and Orange County, California was forced into bankruptcy. Interestingly despite the bond market rout, equities were range-bound in 1994, and then took off in 1995 as the economy remained strong. Despite the lure of higher interest rates in the U.S., the dollar was relatively unchanged. Some emerging markets got slammed as the capital flows into those markets reversed and exposed imbalances. Meanwhile corporate spreads faired well as stronger growth offset the impact of higher Treasury rates.[4]

There is little doubt that today’s ultra-easy monetary policy has created market excesses. As Figure 5 illustrates, the search for yield has likely led to unwarranted capital flows into some emerging and higher yielding markets.[5] However, this does not imply doom for the markets if the Fed starts to taper as the result of healthy economic growth. It is important to remember that tapering is not tightening. While monetary policy may not be as easy as it was, when the Fed does begin to taper, and if they don’t implement another type of easing – such as changing forward guidance by pushing out the date of the first expected rate hike – it will just mean their foot is not as far down on the accelerator pedal. In my opinion the Fed is a long way from stepping on the brake and actually tightening policy. Furthermore, when they do tighten, the lessons from 1994-95 imply that even if the Fed ends up raising rates very aggressively, and nobody expects that to happen anytime soon, it’s the bond market that is likely to get hit hardest.

While the road is potentially bumpy ahead, in the fullness of time a more balanced monetary policy in the face of stronger economic growth has been good for the economy and financial markets. Really, what would be so bad about higher interest rates if the economy were creating 300,000 jobs per month?

[1] The relationship between corporate profits and GDP is imperfect for a number of reasons. First profit margins, which are quite high, can rise or fall. Second, tax rates can change. Third, the large share of U.S. corporate profits which come from activity outside of the U.S. – roughly 20% for all U.S. corporations and over 30% for S&P 500 companies.

[2] It is notable that flows into equities reversed course in the second half of this year while bond yields were rising.

[3] I agree with the view that the Fed will be very slow to start raising rates, though once they start they may move more quickly than they or the markets expect.

[4] Corporate bonds did sell off, but it was the result of higher Treasury rates, not corporate spreads which were actually flat-to-down in 1994.

[5] The imbalances in emerging markets are probably smaller than in the mid-1990s as more countries have flexible exchange rates and better developed financial markets.