Yesterday’s release of CoreLogic’s negative equity report showed that in the first quarter of 2012 there were 11.4 million residential properties with a mortgage in negative equity, which is 23.7 percent of residential mortgaged properties. This is lower than the 12.1 million (25.2 percent) from the fourth quarter of last year.[1] The CoreLogic data show wide variation across states in the percentage of mortgage holders that are underwater. Nevada leads the list with 61 percent of all of its mortgaged properties underwater, followed by Florida (45 percent), Arizona (43 percent), Georgia (37 percent), and Michigan (35 percent). 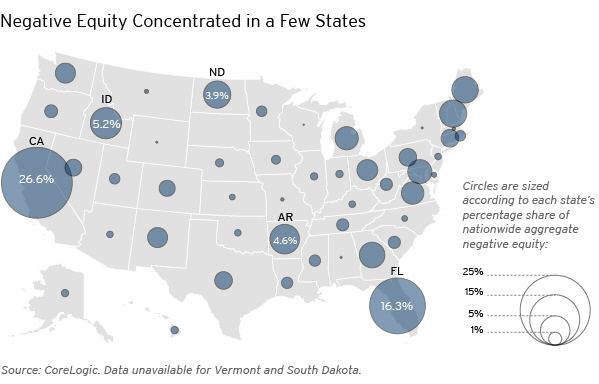 [1] Note that these historical numbers have been updated to reflect the change in methodology used by CoreLogic.