Even with a new president and political party soon in charge of the White House, the nation’s economic standoff continues. Notwithstanding President-elect Joe Biden’s solid popular vote victory, last week’s election failed to deliver the kind of transformative reorientation of the nation’s political-economic map that Democrats (and some Republicans) had hoped for. The data confirms that the election sharpened the striking geographic divide between red and blue America, instead of dispelling it.

Most notably, the stark economic rift that Brookings Metro documented after Donald Trump’s shocking 2016 victory has grown even wider. In 2016, we wrote that the 2,584 counties that Trump won generated just 36% of the country’s economic output, whereas the 472 counties Hillary Clinton carried equated to almost two-thirds of the nation’s aggregate economy.

A similar analysis for last week’s election shows these trends continuing, albeit with a different political outcome. This time, Biden’s winning base in 477 counties encompasses fully 70% of America’s economic activity, while Trump’s losing base of 2,497 counties represents just 29% of the economy. (Votes are still outstanding in 110 mostly low-output counties, and this piece will be updated as new data is reported.) 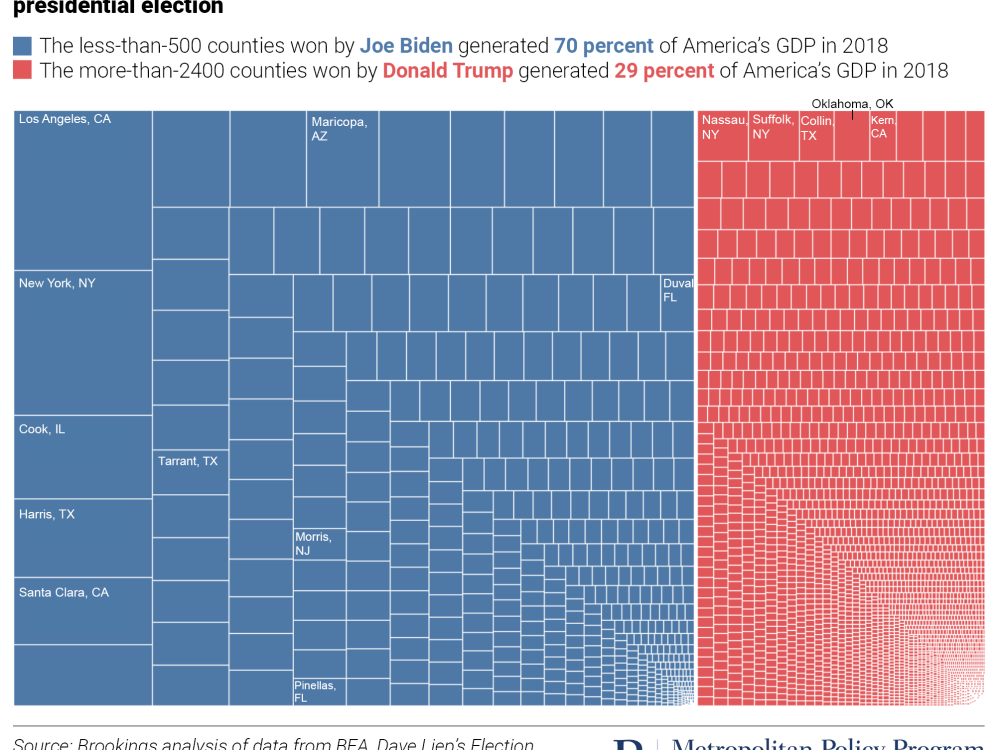 So, while the election’s winner may have changed, the nation’s economic geography remains rigidly divided. Biden captured virtually all of the counties with the biggest economies in the country (depicted by the largest blue tiles in the nearby graphic), including flipping the few that Clinton did not win in 2016.

By contrast, Trump won thousands of counties in small-town and rural communities with correspondingly tiny economies (depicted by the red tiles). Biden’s counties tended to be far more diverse, educated, and white-collar professional, with their aggregate nonwhite and college-educated shares of the economy running to 35% and 36%, respectively, compared to 16% and 25% in counties that voted for Trump.

In short, 2020’s map continues to reflect a striking split between the large, dense, metropolitan counties that voted Democratic and the mostly exurban, small-town, or rural counties that voted Republican.  Blue and red America reflect two very different economies: one oriented to diverse, often college-educated workers in professional and digital services occupations, and the other whiter, less-educated, and more dependent on “traditional” industries.

With that said, it would be wrong to describe this as a completely static map. While the metropolitan/ nonmetropolitan dichotomy remained starkly persistent, 2020 election returns produced nontrivial movement, as Biden added modestly to the Democrats’ metropolitan base and significantly to its vote base. Most notably, Biden flipped seven of the nation’s 100 highest-output counties, strengthening the link between these core economic hubs and the Democratic Party. More specifically, Biden flipped half of the 10 most economically significant counties Trump won in 2016, including Phoenix’s Maricopa County; Dallas-Fort Worth’s Tarrant County; Jacksonville, Fla.’s Duval County; Morris County in New Jersey; and Tampa-St. Petersburg, Fla.’s Pinellas County.

Altogether, those losses shaved about 3 percentage points’ worth of GDP off the economic base of Trump counties. That reduced the share of the nation’s GDP produced by Republican-voting counties to a new low in recent times.

Why does this matter? This economic rift that persists in dividing the nation is a problem because it underscores the near-certainty of both continued clashes between the political parties and continued alienation and misunderstandings.

To start with, the 2020’s sharpened economic divide forecasts gridlock in Congress and between the White House and Senate on the most important issues of economic policy. The problem—as we have witnessed over the past decade and are likely to continue seeing—is not only that Democrats and Republicans disagree on issues of culture, identity, and power, but that they represent radically different swaths of the economy. Democrats represent voters who overwhelmingly reside in the nation’s diverse economic centers, and thus tend to prioritize housing affordability, an improved social safety net, transportation infrastructure, and racial justice. Jobs in blue America also disproportionately rely on national R&D investment, technology leadership, and services exports.

By contrast, Republicans represent an economic base situated in the nation’s struggling small towns and rural areas. Prosperity there remains out of reach for many, and the party sees no reason to consider the priorities and needs of the nation’s metropolitan centers. That is not a scenario for economic consensus or achievement.

At the same time, the results from last week’s election likely underscore fundamental problems of economic alienation and estrangement. Specifically, Trump’s anti-establishment appeal suggests that a sizable portion of the country continues to feel little connection to the nation’s core economic enterprises, and chose to channel that animosity into a candidate who promised not to build up all parts of the country, but rather to vilify groups who didn’t resemble his base.

If this pattern continues—with one party aiming to confront the challenges at top of mind for a majority of Americans, and the other continuing to stoke the hostility and indignation held by a significant minority—it will be a recipe not only for more gridlock and ineffective governance, but also for economic harm to nearly all people and places. In light of the desperate need for a broad, historic recovery from the economic damage of the COVID-19 pandemic, a continuation of the patterns we’ve seen play out over the past decade would be a particularly unsustainable situation for Americans in communities of all sizes.

Cities are pledging to confront climate change, but are their actions working?