The rise of Donald Trump as the odds-on favorite to win the Republican presidential nomination may play havoc with the familiar political map of red and blue states in November’s election. Much has been made about Trump’s potential success in previously Democratic leaning and older mostly white Rust Belt states like Ohio, Michigan, Wisconsin and Pennsylvania. But Trump also has the potential to lose a number of previously Republican-leaning or swing states in the South and West. The latter outcome has both a demographic element—the continued rise of Democratic-leaning minorities, Hispanics, blacks, and Asians in a number of Sun Belt states—and an enthusiasm element: possible unprecedented turnout among Hispanics and other minorities to vote against Trump and in favor of likely Democratic candidate Hillary Clinton.

Such a contest, pitting the demography and enthusiasm of partisan voting blocs against each other, might be most evident within the state of Arizona. Granted Arizona has been a solid red state that voted for Republican presidential candidates in 15 or the past 16 presidential elections (the exception was 1996 when the state voted for Bill Clinton in a three-way race). But its longstanding conservative mostly white electorate has been countered by an increase in predominantly young Hispanics. Between 1990 and the 2010 censuses, its Hispanic population grew by 175 percent and the white share of its total population declined from 75 to 58 percent.

In many ways, Arizona epitomizes what I have described as a “cultural generation gap” at the root of this year’s presidential campaign. Already the primary campaigns have placed in sharp relief the conflicting views of an older mostly white electorate (and heavily Trump voters) with minority voters who tend to be younger (Clinton and Sanders voters). Immigration is a key wedge issue. A Pew survey showed that more than half of white baby boomers and seniors believe that increasing numbers of newcomers from other countries represent a threat to traditional American values and customs—a view not held by younger minorities. It is central to Trump’s signature promise to build an impenetrable wall on the Mexican border, but it generates backlash among minority groups.

This issue is especially salient in Arizona where the demographic fault lines are sharp. Because of the state’s continued draw of mostly white retirees from other parts of the country and its sharp gain of youthful immigrants and U.S.-born minorities, the state’s over 65 population is far whiter than its child population (82 percent versus 41 percent). Arizona leads the nation on this contrast which reflects both culture and race. (See charts for its two largest counties, Maricopa and Pima counties). Unsurprisingly, immigration is an especially divisive issue. When the well-known Arizona state Senate Bill 1070 authorizing police to check the immigration status of people stopped for other reasons was proposed in 2010, it was favored by 61 percent of whites but only 21 percent of Hispanics, 62 percent of those ages 55 and over, and 45 percent of those under age 35. 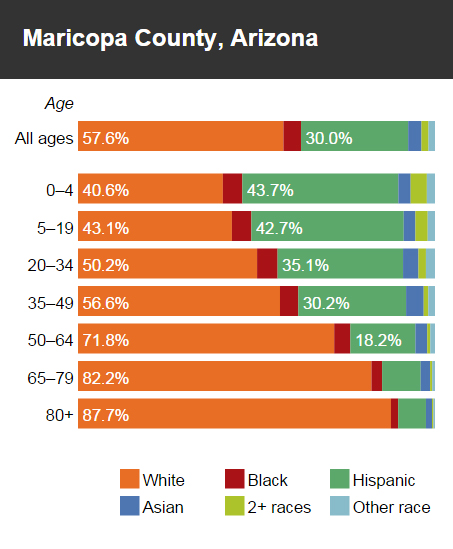 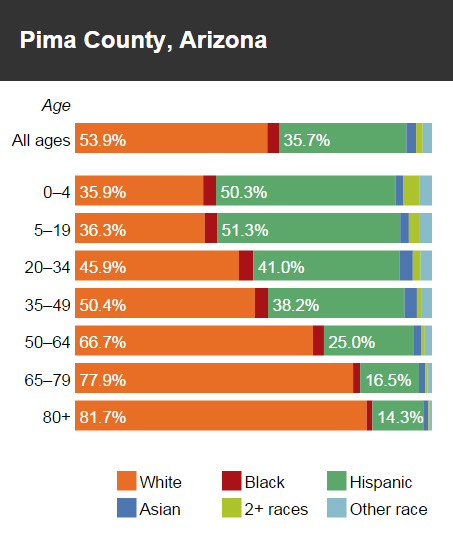 Arizona’s racial and age divide has played out in presidential elections as well. In 2012, Republican Mitt Romney took 66 percent of the state’s white vote and 71 percent of those aged 65 and above. In contrast, Democrat Barack Obama won 74 percent of the Hispanic vote and 63 percent of those under age 30. Overall Romney took the state 54 to 45 percent, and this reflects the demographic rub in Arizona. While minorities now comprise well over four in 10 of state’s residents, many of those minority residents are too young to vote, not citizens, or not registered. Thus in 2012, whites comprised fully 65 percent of eligible voters, and because of low minority turnout 72 percent of Election Day voters were white.

But as more Hispanics and other minorities reach voting age, Arizona’s demography is changing rapidly and, in the current election climate, minority enthusiasm may be as well. Recent estimates suggest that minorities could comprise nearly 40 percent of Arizona’s eligible voters this year—of which two-thirds are Hispanics. Moreover, greater enthusiasm could increase Election Day turnout of eligible minority voters from a weak 44 percent in 2012 (compared with 62 percent of whites). With a substantial increase in Hispanic and other minority turnout, the percent of whites voting on Election Day could be reduced to 64 percent of voters. This would still provide a stiff challenge for the Democratic candidate because, even with larger numbers, those minorities would have to vote nearly 80 percent for the Democratic candidate to make Arizona a blue state in November. Yet it is possible, and it would represent a prime example of a demographically emerging voting bloc showing its strength by voting against a candidate they fear instead of in favor of one they embrace.

How restrictive zoning shut the middle class out of Greenwich, Conn.