The divisions between an increasingly minority younger electorate and its largely white senior counterpart have already been seen in the past two presidential elections, wherein the Democratic candidate was the victor. Yet as I point out in my book, “Diversity Explosion,” the results of future elections are less assured. That is, while new racial shifts introduced by the millennial generation may very well drive current and future Democratic voter advantages, the national electorate will also embody a large and growing senior population as the mostly white baby boom population continues to age.

This is evident in the figure, which depicts eligible voters in 2012 and the projected eligible voters in 2024 for each age group. There will clearly be a browning of the 18- to 29-year-old and 30- to 44-year-old segments of the electorate as the large millennial generation begins entering middle age in 2024. By then, minorities will constitute nearly one-half of young adult eligible voters and 40 percent of those ages 30 to 44. These represent voting blocs that are ripe for Democratic retention if current race and generational political affinities continue. 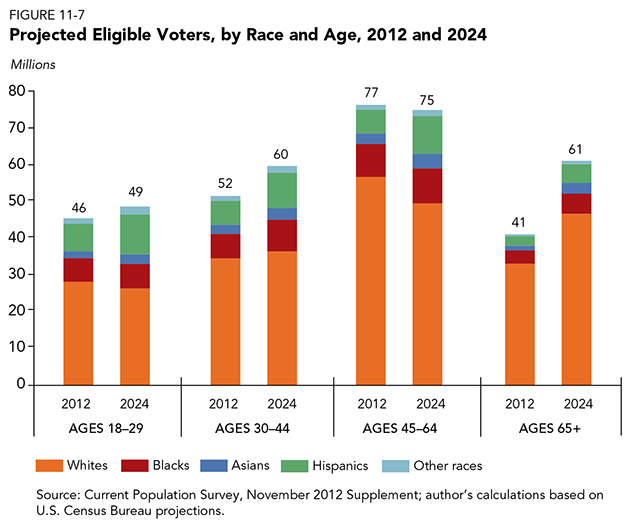 During the same period, the large, mainly white group of voters age 45 to 64 will lose some of its baby boom population as the latter advance into a sharply rising senior population. Votes from these older two groups will be easier for the Republican Party to retain if current generational voting affinities continue. Thus, there will still be a contest. That is, in 2024, the eligible voter population age 45 and above will be 26 percent larger than the eligible voting population under age 45—a disparity that will be further widened by the higher turnout of older eligible voters.

Of course, today’s racial and generational proclivities are not necessarily destined to continue in a straight-line fashion. Democrats could make greater strides with key white voting blocs including white college graduates—both men and women—who will increasingly dominate post-boomer generations of voters. Republicans could make gains among Hispanics and other minorities. Furthermore, both parties will do their best to garner the favor of the growing, high-turnout senior population that will be increasingly composed of baby boomers. In fact, the greatest challenge for both parties will be to appeal to the often-conflicting needs of voters on both sides of the emerging cultural generation chasm while still keeping the country on sound fiscal ground.