As the waves from the nation’s “Diversity Explosion” ripple out, young generations of new minorities—Hispanics, Asians, and multiracial American—are interacting with older minorities and white Americans in their pursuit of opportunities in a country that is in dire need of more youth. As the management textbooks might say, the growth of young, new minority populations from recent immigration and somewhat higher fertility is providing the country with a “just in time” demographic infusion as the largely white U.S. population continues to age. 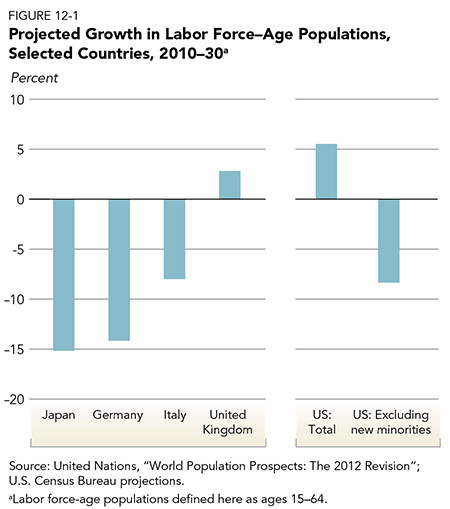 The nation is benefiting from the healthy growth that these minorities are creating in the nation’s workforce—growth that many U.S. peer nations could use. In contrast to the population of labor-force age in Japan, Germany, Italy, and the United Kingdom—countries with generally older populations, lower fertility, and lower immigration—the U.S. labor-force-age population is projected to grow more than 5 percent between 2010 and 2030. Yet were it not for new minorities, the country’s labor force would decline by 8 percent.  Moreover, within the labor force, new minorities add needed youthfulness that brings with it innovation and an entrepreneurial spirit. Projections of the labor force show that in 2030, 54 percent of new minorities will be under age 40, compared to well under half of the rest of the labor force population.