Brookings’ comprehensive State of Metropolitan America report focuses on the demographic and social trends shaping the nation today. That’s population, race and ethnicity, income, education and the like. But we’re also lucky enough to have data from the U.S. Census on commuting patterns. We will dig into the details of these journey-to-work trends on this blog beginning today with a look at the uptick in transit use.

The report shows that while Americas still drive to work alone in far greater numbers than any other way, the share of Americans that commute by transit actually increased from 2000 to 2008. That’s the first time that’s happened in 40 years. The map shows that part of the increase is due to big gains metropolitan areas with large transit systems and extensive rail networks such as New York and Washington.

But increases were also seen in metros that opened new transit lines and expanded transit service in the last eight years. Charlotte, N.C. opened a light rail line in November 2007, placing it as the metro with the highest increase of commuters by streetcar, subway or light rail in 2008. Colorado Springs opened an intercity commuter bus line in 2004, making the top 10 metro rankings in both increase of commuter transit ridership and transit rate. 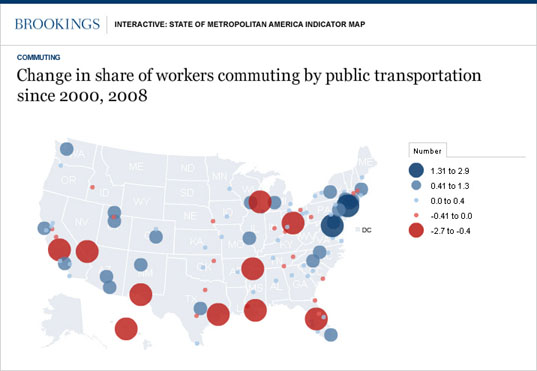 It is important to note that while two-third of metros saw increases in commuting by transit during the 2000s, most of these increases were very small. Only four were more than 1 percent and important places like Houston, Memphis, Las Vegas, and Milwaukee saw transit drops. But at the same time, the only decrease in transit use larger than 1 percent was in the New Orleans metro area, due to the aftermath of Hurricane Katrina.

So what’s going on? Well, we also know that solo driving to work fell during this time period. This change may reflect a cumulative effect of higher gas prices, increased transit availability, and other factors. But while important, we don’t think these incremental changes in commuting patterns alone mean we’re on a path to meaningful reductions in carbon emissions. Metro areas continue to decentralize in a big way. Therefore, in order for the nation to truly commit to a low carbon future, serious attention to more sustainable growth patterns will also be necessary.