Teenagers love selfies. The phenomenon grew to new heights in 2013 when the Oxford Dictionaries declared selfie to be the word of the year. According to Oxford a selfie is, “a photograph that one has taken of oneself, typically one taken with a smartphone or webcam and uploaded to a social media website.” A Pew Research Center poll found that 55 percent of millennials have posted a “selfie” on a social media site, and people of other ages are much less likely to do so. The popularity of the selfie feeds into the narrative that the millennial generation is conceited and does not value privacy. In truth millennials have a range of views on privacy.

Teenagers appear to breakdown into two groups: those concerned with privacy and those comfortable sharing personal information on the web. Millennials are split on using web services with targeted ads.  46 percent thought it was, “was a fair exchange for free services” and 47 percent thought it was, “an unjustified use of private information.” Only one third of the adults overall expressed a willingness to make this trade. 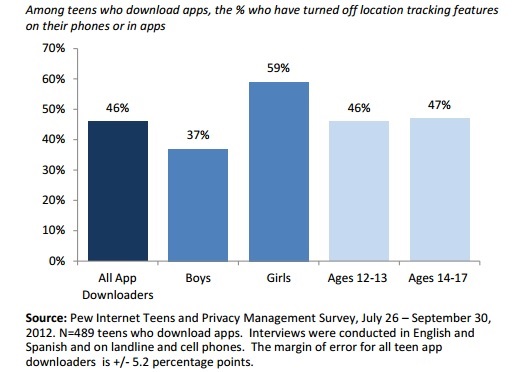 Helping People to Protect Themselves

Teens and parents concerned about unintended consequences relating to data sharing could benefit from policies that provide them with new privacy protection tools. Do-Not-Track Online Act of 2013 would require the creation of an “eraser button” that would let children or their parents eliminate publicly available information. It also establishes additional protections against collecting personal or geolocation data from children and minors. The number of teenagers using cell phones will only continue to rise. Given serious concerns about privacy and cybersecurity, providing young adults with the ability to opt out of apps and delete their information has merit.