Are women at a disadvantage in the marriage market? A recent Pew report finds a dearth of “marriageable men” – measured by the ratio of employed, never married men to all never married women.

But the Pew definition of the “marriage market” biases any ratio of men to women. Since the populations of men and women are of similar sizes, taking just one segment of the male population (the employed) and comparing it to the entire population of women suggests that there are not enough marriageable men.  If we were to calculate the ratio of all men to employed women, the reverse would be true.

Some people will argue for the Pew approach on the grounds that men are still expected to be breadwinners: 78% of women in the Pew study said they are looking for a spouse with a stable job, compared to just  46% of men. But women can be “unmarriageable” too. Many men may be reluctant to marry women who have already had a child with another man, for example.  Yet when we look at the ratio of men to marriageable women defined as women with no children in their household, once again it is young single women, not men, that are in short supply.

A New Definition of Marriageability

First, let’s just look at the ratio of never-married men to women aged 25 to 34.  Because women are more likely to be married or previously married, there are 126 single men for every 100 women in this demographic: plenty to go around.

Next, let’s take the definition of marriageable used by Pew — employed, never married, and between the ages of 25 to 34— but apply it to both genders. This comparison seems more apt to us than a comparison to all women.   As our colleague Richard Reeves puts it: “‘Marriageability’ here means, principally, breadwinning potential. Nobody ever apparently worries about the ‘marriageability’ of a woman.”  Yet in today’s America, the primary breadwinner in 41 percent of all families with children is a woman. 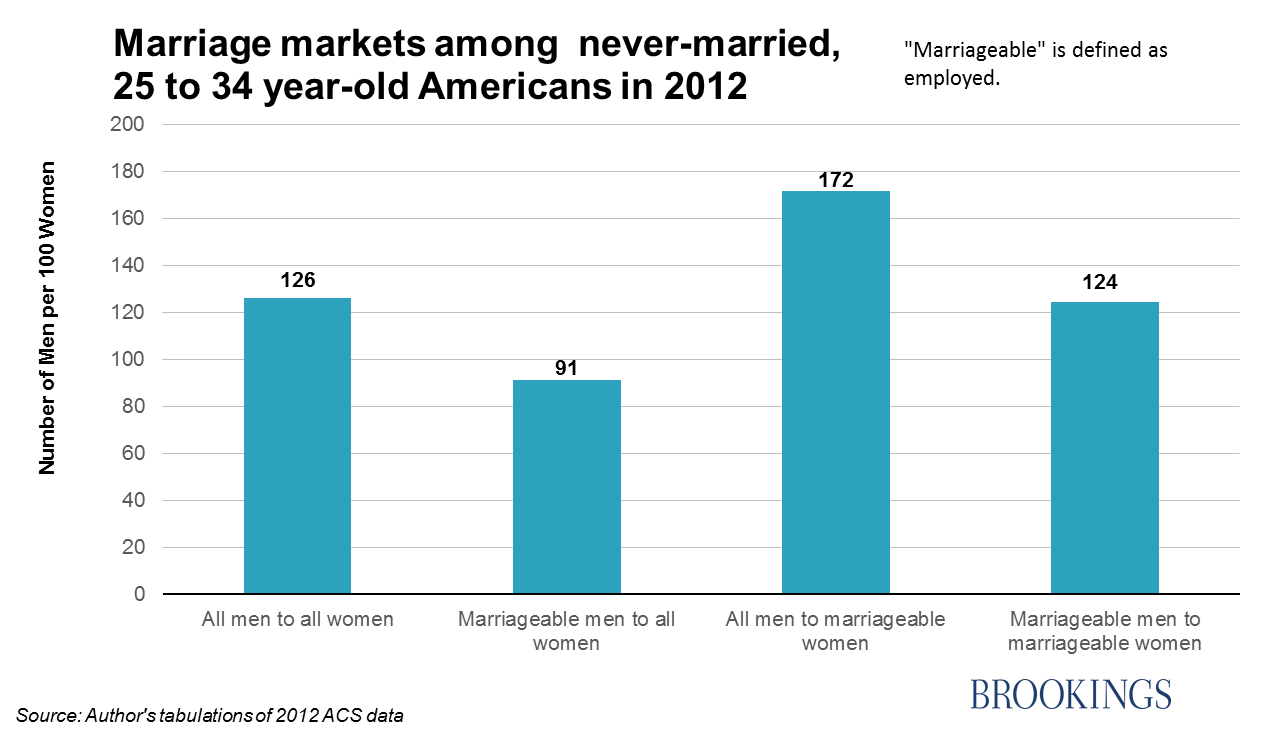 Another approach is to define marriageable as childless, never married, and between the ages of 25 to 34. In this case, there are 161 marriageable men for every 100 marriageable women.  As argued in Sawhill’s new book, Generation Unbound, the proportion of children born outside marriage has skyrocketed and the declining economic prospects of men, while implicated, cannot explain more than a small portion of the trend. 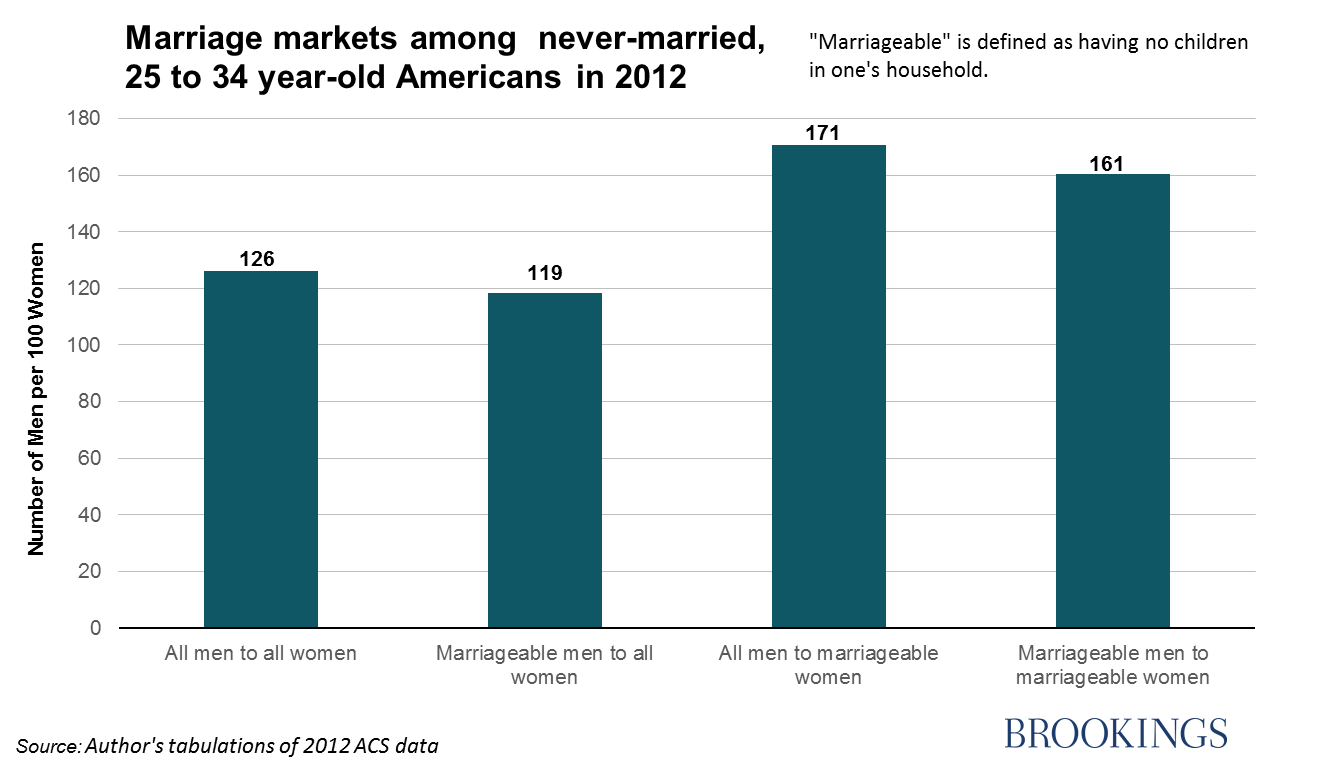 Perhaps, however, employment and past childbearing both matter for marriageability: a person may be marriageable if they are never married, employed, childless, and aged 25 to 34.  In this case, there are 152 marriageable men for every 100 marriageable women: 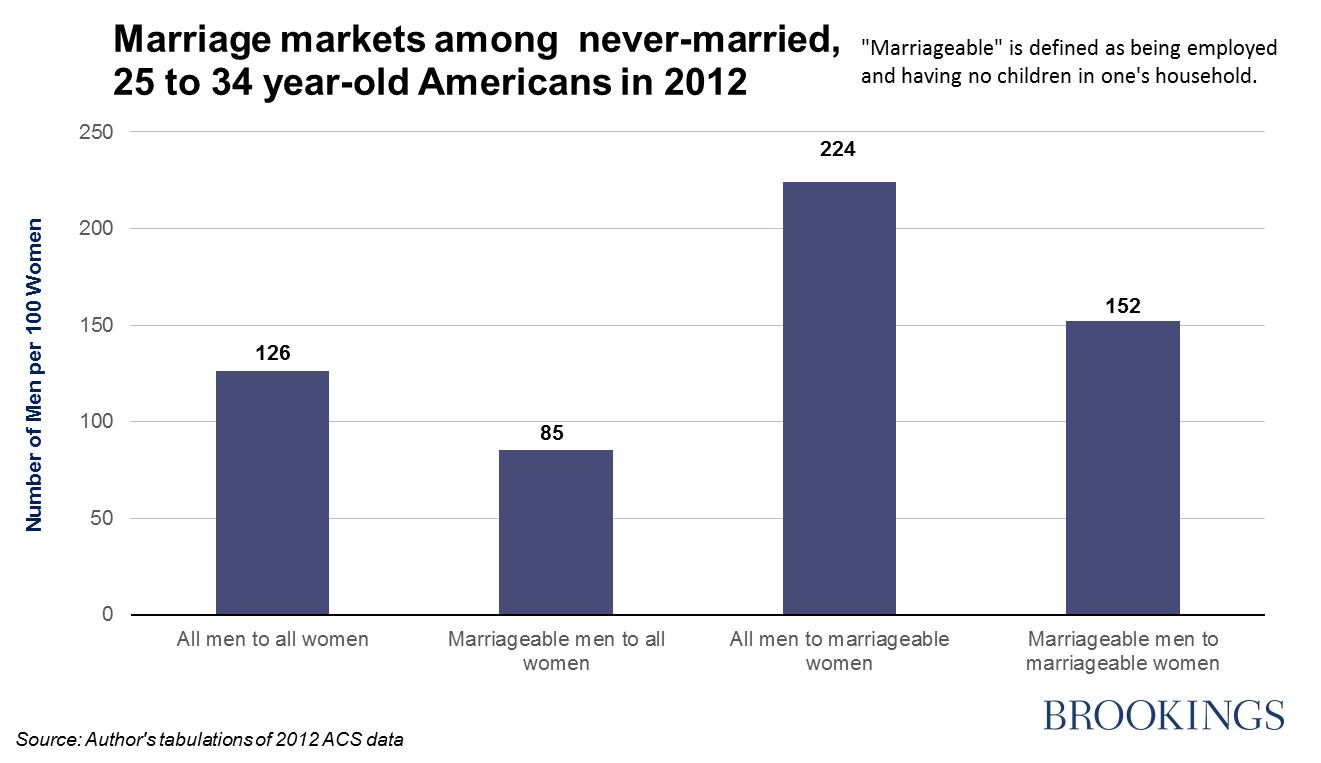 More than a Few Good Men

On all of our measures of marriageability, the ratio favors single women. Only comparisons of employed single men to all single women result in a marriage market skewed in favor of men. Admittedly, these ratios may vary by race, location, or other factors.  But if we are worried about the fate of marriage in America, we should not focus exclusively on the economic prospects of men.  Poor economic prospects for women as well as men– particularly in the wake of the Great Recession— and the growth in children born out of wedlock also contribute to the shrinking population of Americans who are prime candidates for marriage.