Since the very first report of the Intergovernmental Panel on Climate Change, there has been a recognition that one of the principal effects of climate change will be on the movement of people.  But predictions of the number of people who will have to move by the end of the century because of the effects of climate change are all over the map, ranging from 50 million to one billion. As Oli Brown and Susan Martin have observed, these predictions tend to fall into two camps which they helpfully call ‘alarmists’ and ‘skeptics.’

Those who approach the issue from a background of climate change tend to see the environment as the main cause of migration, project that hundreds of millions of people will be affected and sometimes use the term climate ‘refugees.’ For example, they use models showing the number of people who will be forced to move because of rising sea levels, arguing that this is a totally new phenomenon. Sometimes they use the large numbers of projected migrants as a clarion call to halt emissions.

Those on the ‘skeptic’ side tend to come from a migration or humanitarian background and question the models of sea level rise as being simplistic and explain that decisions to migrate are complex and include environmental as well as economic and social reasons. Environmental change isn’t the only driver of migration, they argue. Migration specialists worry about a potential backlash against migrants because of frightening predictions of millions of people on the move and are particularly uncomfortable by the use of the term ‘refugee’ which has a precise meaning in international law. If millions of people are loosely called ‘refugees’, they argue, this will degrade the legally-recognized concept of refugee at a time when 15 million or so people are desperately seeking protection from violence and conflict.

And yet climate change will not only displace people in the future; it is displacing people now. More frequent and stronger hydrometeorological and climatological natural disasters than ever witnessed in recent history, like the floods in Pakistan in 2010, are displacing millions of people and are pushing the humanitarian community to the limits of its capacity to respond. Longer and more frequent droughts force large numbers of people to migrate in order to survive. Competition for resources, such as water and access to land, creates the risk of violent conflict. Sea level rise and changing weather patterns are leading to riverine erosion, increasing salination of water on Pacific islands, and consequently to both displacement and migration.

Additionally, well-intentioned mitigation efforts to keep climate change in check by investing in renewable energies, protecting forests, and conserving habitats are causing further displacement – compelling people to leave their homes and fields, often with little safeguards or compensation for their losses. In Alaska, Robin Bronen has demonstrated that many small indigenous communities can no longer remain where they are because of the effects of climate change – including melting permafrost, stronger storms, coastal erosion – while research undertaken by Brookings shows that climate changes is affecting the mobility of different communities in the Arctic in different ways.

Mobility as a form of adaptation to climate change as was recognized by the Conference of Parties to the UNFCCC, meeting in Cancun (COP 16) in December 2010. This resolution marked the first occasion that the COP – the principal forum for climate change negotiations a– recognized human mobility as an adaptation strategy for climate change. The resolution identified three types of mobility: climate change-induced displacement, migration and planned relocation. All of these terms are problematic. The term ‘displacement’ implies coercion – people are forced to leave their homes while ‘migration’ is assumed to be voluntary.  In fact the distinction isn’t so clear. People leave their communities because of deteriorating environmental conditions, but also because of poor economic conditions and a perception that they will be better off elsewhere – usually in a large city.  And then there are the people who aren’t able to leave their communities – because they don’t have the resources to make the trip or because they’re old or have disabilities or caring for family members who can’t move. These groups of people, deemed ‘trapped populations’ by the Foresight report, may be more invisible and more vulnerable than those who are displaced.

I’m grateful for the opportunity to explore the connections between climate change and mobility in this blog. Next time I’ll look at the issue of planned relocations made necessary by the effects of climate change. What happens when areas become uninhabitable and whole communities must be relocated? Who is thinking about this? What guidance is there? Later I’ll address the particular phenomenon of displacement caused by sudden-onset disasters – disasters which are likely to intensify as a result of climate change. Four million people were displaced by Typhoon Haiyan – and most remain displaced 6 months after the storm. With climate change increasing the intensity and frequency of sudden-onset disasters, both alarmists and skeptics agree that more people will be on the move in the future. 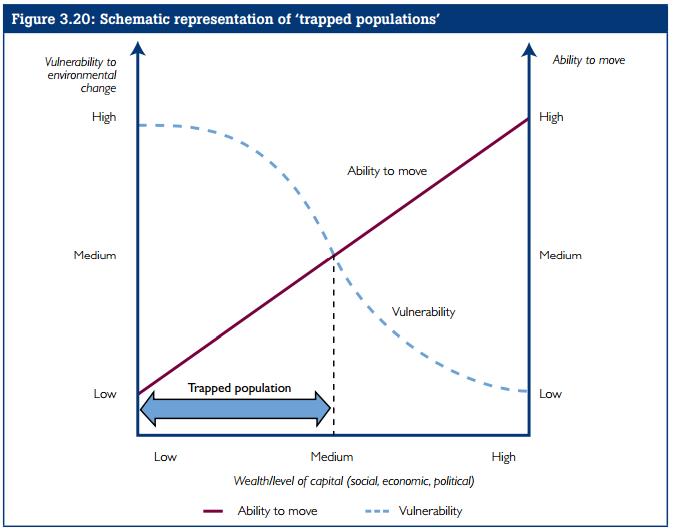