A number of policymakers and analysts in the United States have called for countries like China and India to “do more” in the Middle East. Arguably, both Beijing and Delhi are doing more—though perhaps not in the way these advocates of greater Asian engagement in the Middle East might have wanted. President Xi Jinping recently traveled to the region and India’s Prime Minister Modi will return there over the weekend. After quick trips to Brussels for the India-EU Summit and a bilateral, as well as to Washington for the Nuclear Security Summit, Indian Prime Minister Narendra Modi will head to Riyadh tomorrow. The trip reflects not just the importance of Saudi Arabia for India but also the Middle East (or what India calls West Asia) and the opportunity this particular moment offers to Indian policymakers.

The Middle East has been crucial for India for decades. It’s been a source of energy, jobs, remittances, and military equipment, and holds religious significance for tens of millions of Indians. It’s also been a source of concern, with fears about the negative impact of regional instability on Indian interests. But today, as Modi visits, there’s also opportunity for Indian policymakers in the fact that, for a number of reasons, India is important to Saudi Arabia and a number of Middle Eastern countries in a way and to an extent that was never true before.

As it has globally, India has a diversified set of partnerships in the Middle East, maintaining and balancing its relationships with the Gulf Cooperation Council countries, Iran, and Israel. The region remains India’s main source of imported oil and natural gas (58 percent of its oil imports and 88 percent of its liquefied natural gas imports in 2014-15 came from the Middle East). In addition, as of January 2015, there were 7.3 million non-resident Indians in the region (64 percent of the total). These non-resident Indians remitted over $36 billion in 2015 (52 percent of the total remittances to India). Add to that India’s Sunni and Shiite populations (among the largest in the world), counter-terrorism cooperation with some countries, India’s defense relationship with Israel, the desire to connect with Afghanistan and Central Asia through Iran, and the potential market and source of capital it represents for Indian companies, and it becomes clear why this region is important for India. 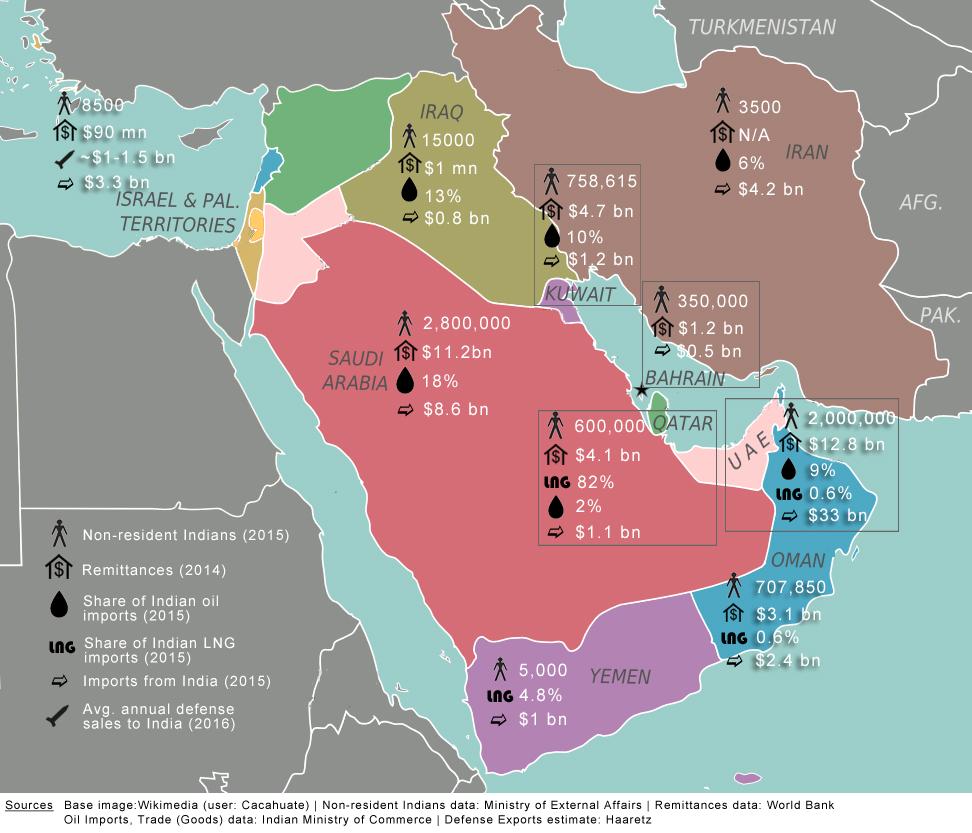 But, with many Middle Eastern countries pivoting to Asia or at least giving it a fresh look, India arguably has more leverage than it has ever had in the past. There have been a number of reasons why these countries have been looking east recently:

In this context, India has some advantages. Its economy is doing relatively well compared to that of other countries and offers a market for goods and services, as well as potentially an investment destination. India, for example, has become Israeli defense companies’ largest foreign customer.

Crucially for the oil and natural gas-producing states in the region, India also continues to guzzle significant—and growing—quantities of both. But, today, Delhi has buyer’s power. Why? Because oil prices are relatively low and there’s a lot of gas on the market, traditional buyers are looking elsewhere for fossil fuels or looking beyond them to cleaner energy sources. India, too, has more options and has been diversifying its sources of supply (compare India’s 74 percent dependence on the Middle East for oil in 2006-07 to the lower 58 percent that it gets from there now).

Thus, India might still be dependent on the Middle East for energy, but now the Middle East also depends on India as a market. This has altered dynamics—and India’s increased leverage has been evident, for example, in the renegotiated natural gas supply deal between Qatar’s RasGas and India’s Petronet, which came with lower prices and waived penalties. Even countries like Iran, which now have more options for partners and have not hesitated to point that out to Delhi, still have an interest in maintaining their India option. Regional rivalries might have made Delhi’s balancing act in the region more complicated, but it also gives each country a reason to maintain its relationship with India.

And the Modi government has been looking to take advantage of this situation. While its Act East policy received a lot more attention over the last couple of years—from policymakers and the press—this region hasn’t been missing from the agenda or travel itineraries. For example, Modi has traveled to the United Arab Emirates and met with Iranian President Hassan Rouhani on the sidelines of the last Shanghai Cooperation Organization conference, and the Indian president has traveled to Israel, Jordan, and the Palestinian territories. The Indian foreign minister has visited Bahrain, Israel, the Palestinian territories, Jordan, Oman, and the UAE and also participated the first ministerial meeting of the Arab-India Cooperation Forum in Manama earlier this year. The Modi government has also hosted the emir of Qatar, the crown prince of Abu Dhabi, the Bahraini, Iranian, Omani, Saudi, Syrian, and UAE foreign ministers, as well as the Israeli defense minister to India.

China’s increased activity in the region, as well as Pakistan’s engagement with Iran and the rush of European leaders to the latter, have led to calls for speedier action.

But there have been concerns that this engagement is not sufficient, particularly relative to that of some countries. For example, China’s increased activity in the region, as well as Pakistan’s engagement with Iran and the rush of European leaders to the latter, have led to calls for speedier action. The Indian foreign secretary’s recent comment that “we are no longer content to be passive recipients of outcomes” in this region also seemed to reflect the understanding that Delhi needs to be more proactive about deepening its relationships with the countries in the region, rather than waiting for them to take shape organically or just reacting to events as they occur.

It is in this context that Modi travels to Riyadh. The relationship with Saudi Arabia is one of the key pillars of India’s Middle East policy. A major source of oil, jobs, and remittances, it is also a destination for over 400,000 Indians who go to the country for Hajj or Umra every year. In addition, in recent years, there has been more security cooperation, with Riyadh handing over individuals wanted in India and the two countries working together on countering money laundering and terrorism financing. 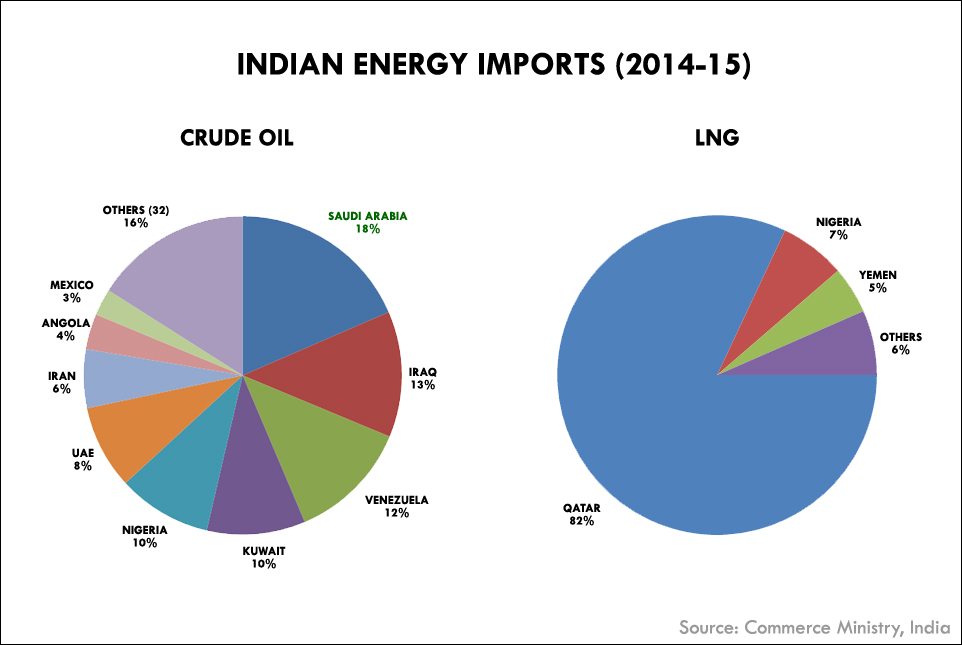 The relationship has not been without problems from Delhi’s perspective. Just to list a few:

More recently, incidents involving Saudi diplomats in India have also negatively affected (elite) public perceptions of the country, though the broader impact of this, if any, is unclear. Over the medium-to-long term, there are also concerns about potential instability within Saudi Arabia.

During Modi’s trip, however, the emphasis will be on the positives—not least in the hope that these might help alleviate some of the problems. The prime minister will be hosted by King Salman, who visited India as crown prince and defense minister just before Modi took office. He will also meet a slate of Saudi political and business leaders. The Indian wish-list will likely include diversification of economic ties, greater two-way investment, as well as more and better counter-terrorism cooperation. 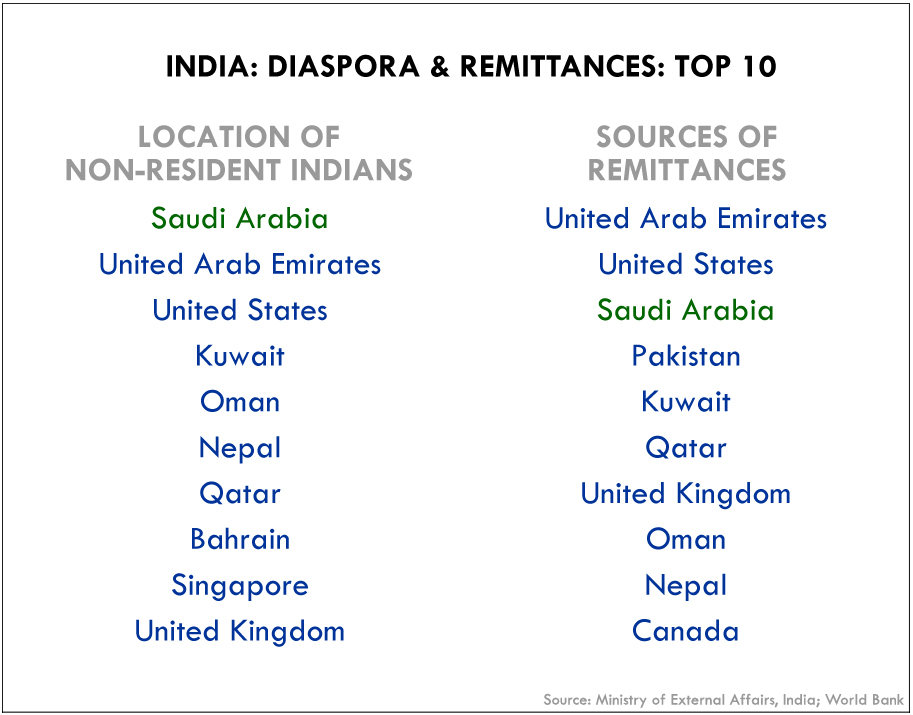 There will not be a large diaspora event—as Modi has done in Australia, Singapore, the UAE, United Kingdom, and the United States—but the prime minister will engage privately with members of the Indian community. He will also meet with Indian workers employed by an Indian company that is building part of the Riyadh metro. It is not hard to assess the reason for this particular engagement, given increased sensitivity in India (particularly in the media) about the treatment of citizens abroad, as well as the government’s interest in making a pitch for Indian companies to get greater market access. But, with Riyadh’s interest in creating jobs for Saudis, Modi will also try to highlight that Indian companies are contributing to the training and employment of locals (especially women) by visiting another Indian company’s all-female business process service center.

This will reflect the broader theme of highlighting to Riyadh and Saudis that it is not just India that benefits from the relationship—they do too. Some in India hope this has an additional effect: of giving Riyadh a reason not to let its relationship with Pakistan limit that with India, and perhaps occasionally making it willing to use some of its leverage with that country to India’s benefit. Despite recent irritants in the Saudi-Pakistan relationship, however, Delhi is realistic about the limits of weaning Riyadh away from Islamabad.

So does all this mean India will “do more” in the Middle East? For all the reasons mentioned above, the country has been involved in the region for a number of years—though, as the Indian foreign secretary has noted, this involvement was not in large part the product of active state policy. Indian interests in the region will likely increase in the future and, thus, so will its corporate and official engagement. But that engagement might not be what some American observers have in mind. As India’s capabilities grow, it might do more in terms of providing maritime security, intelligence sharing, evacuating expatriates when necessary, and contributing to U.N. peacekeeping operations. It could also potentially do more in terms of capacity building within these countries with the support of the host governments. There might also be scope for India to expand its West Asia dialogue with countries like the United States. But it will likely remain wary of picking sides or getting involved in non-U.N.-sanctioned military interventions in the region unless its interests are directly affected (the previous BJP-led coalition government did briefly consider—and then reject—joining the United States coalition in the Iraq war, for instance).

How Middle Eastern conflicts are playing out on social media