As the two-year anniversary of Barnichon-Nekarda (BN) model forecasts approaches, we wanted to evaluate how our model has performed in real time. This post assesses the model’s forecasts in two dimensions. Because the latest unemployment rate reading garners considerable immediate attention from media, policymakers, and Wall Street every month, we first looked at how the model has done at one-month ahead, or “next month,” forecasts. Second, because forecasts at longer horizons are even more important for policymakers and economic decision makers, we compared our model’s forecasts for the current and next quarter with those of the Survey of Professional Forecasters (SPF).

We first compared our model’s one-month ahead forecasts against the market expectation, as reported by Yahoo! Finance, at the time of the release. The results from October 2012 to July 2014 are shown in Figure 1 below. 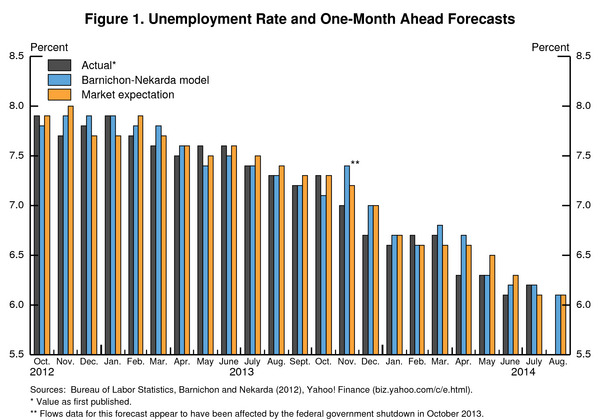 The grey bars plot the unemployment rate as it was first published. The BN model’s forecasts (the blue bars) correctly predicted the unemployment rate 6 times, compared to only once for the market expectation (the orange bars). Although both the model and the market were generally surprised to the downside (that is, the unemployment was lower than expected) over this period, the model’s misses were a bit smaller on average. Quantitatively, we can also evaluate forecasting performance by comparing the mean-squared error of the competing forecasts (see here for more details). Both the model and the market forecast had similar root-mean-squared forecast errors of about 0.2 percentage point over this period.

We next turn to forecasts at longer horizons. For this, we compare the model’s performance with the median forecast from the SPF. The SPF forecasts are submitted in February, May, August, and November; we used the model forecast from the same month. As before, we evaluated both forecasts against the unemployment rate as first published. The left panel of figure 2 plots the current-quarter forecasts—which because of the survey timing includes one month of data and two months of forecast—while the right panel plots the next-quarter forecast. Broadly speaking, since 2012:Q4 the BN model performed about as well as the SPF forecast at these horizons. 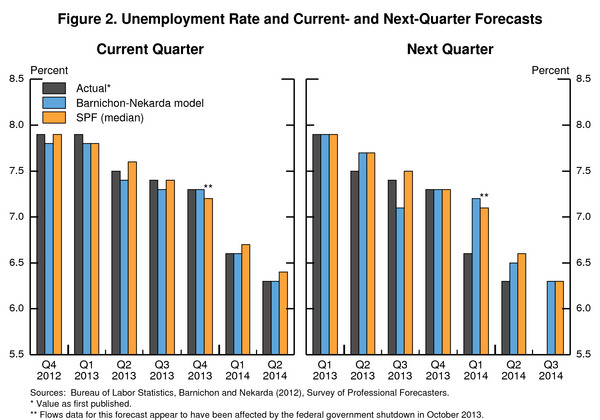 Board of Governors of the Federal Reserve System