The Great Recession and subsequent recovery has not affected all Americans equally. As previously documented by The Hamilton Project, workers without some college education were hit the hardest. In August 2013, the unemployment rate for individuals twenty-five and older without a high school diploma exceeded 11 percent and was over 7 percent for high school graduates, compared to only 6.1 percent for individuals with some college or an associate degree, and just 3.5 percent for those with a bachelor’s degree. So while it has generally been accepted that higher education provides both private and social returns, the current economic situation has put a public spotlight on the imperative of post-secondary schooling.

For many Americans, the high cost of higher education provides a substantial barrier to college entry and ultimate completion, as well as leading to issues with debt and high loan payments later in life. Researchers have shown that the nation’s current system of higher education financing—in terms of both federal and private market loans and grants—combined with the difficulty of obtaining accurate information about costs and financial aid options, imposes substantial barriers to qualified students from low- and middle-income families.

In today’s economic analysis, The Hamilton Project provides a snapshot of today’s higher education student. We show that today’s students tend to be older than college students in the recent past and are more likely to be financially independent of their parents. Currently, a sizeable fraction of students is enrolled in a two-year institution. Importantly, family income continues to play an important role in determining the type of institution a student attends. We also highlight three forthcoming Hamilton Project papers that address the complicated landscape of higher education financing with innovative policy proposals.

The Economic Returns to a College Degree

Previous Hamilton Project work has emphasized that a college degree is one of the best investments that a young person can make. Over her lifetime a college graduate will earn, on average, $570,000 more than an individual with only a high school diploma. For low-income students, a college degree can be a ticket out of poverty and serve as a vehicle for economic mobility.

While these statistics do not suggest that any individual who goes to college immediately improves his/her economic standing, for those individuals with the appropriate talent and drive, higher education can be a powerful tool of upward mobility. The goal of the policy proposals highlighted below is to make that opportunity more accessible to broader swaths of the American population. 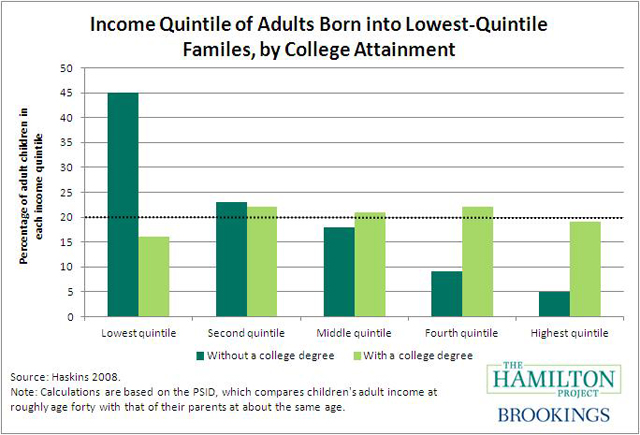 The characteristics of students enrolled in higher education are rapidly changing as older, more-financially-independent students are seeking degrees. According to the National Center for Education Statistics, enrollment of students ages twenty-five and over increased by 42 percent between 2000 and 2010, as compared to a 34 percent increase in enrollment among students younger than age twenty-five. Along similar lines, as figure 2a below shows, currently, slightly more than half of students —51.3 percent—enrolled in higher education institutions are considered “independent” (i.e., at least twenty-four years old and financially independent of their parents for purposes of financial need determination). Furthermore, as seen in figure 2b, a larger share of students is enrolled in a public two-year college, as compared to a four-year institution, with the rates being 38.1 percent and 28.4 percent, respectively. 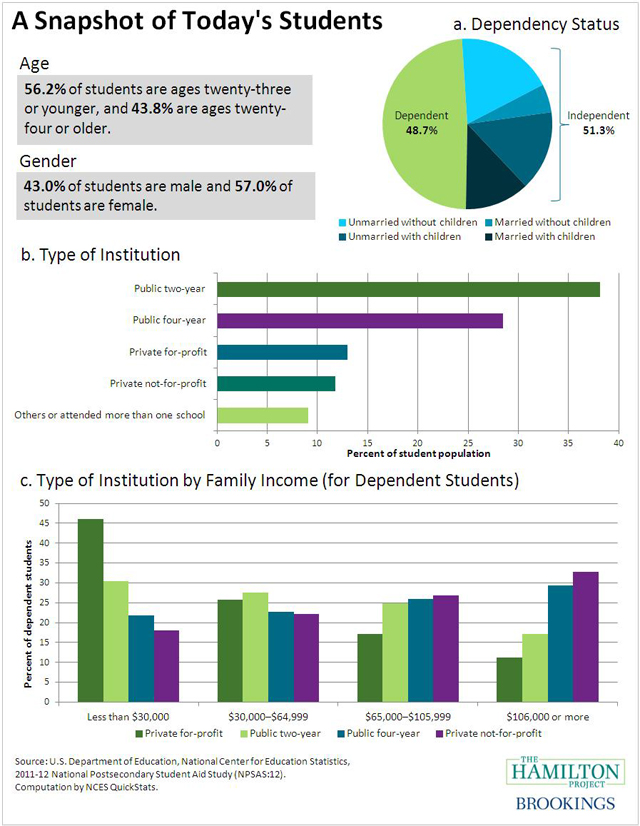 For a higher-resolution version of the above figure, click here.

The Pell Grant program was conceived in 1972 as a one-size-fits-all voucher for recent high school graduates from low-income families entering traditional four-year degree programs. Although today’s student population is quite different in composition, the Pell Grant program’s original structure has remained fundamentally unchanged. The Pell Grant program, administered by the U.S. Department of Education, currently serves 9 million students a year.

While the Pell Grant program is considered by many to be an essential way to promote college access, event its supporters have noted areas of potential improvement for the program.

Low completion rates for Pell Grant recipients are one area that has been highlighted in policy circles. As figure 3 shows, only an estimated 45 percent of Pell recipients have completed any credential six years after beginning their degree. Although noncompletion is prominent among all beginning undergraduates (51 percent), the low completion rates for Pell recipients potentially indicate that there is room for improvement in the program.

In a forthcoming Hamilton Project discussion paper, Sandy Baum of the Urban Institute and the George Washington University and Judith Scott-Clayton of Teachers College, Columbia University, propose structural reforms to the Pell Grant program. The authors propose to augment the Pell program’s financial support with tailored guidance and support services, including separately tailored services for the distinctive circumstances of dependent and independent recipients. They also propose dramatically simplifying the eligibility and application process, as well as strengthening incentives for student effort and timely completion.

From a broader perspective, Pell Grant funding is not the only type of aid available to students. Many students would qualify, on the basis of income, for substantial financial aid packages from selective institutions. But this is not widely appreciated among many potential students from modest family backgrounds.

For many students, both the perceived and the actual costs of attendance continue to deter students from pursuing a college degree, particularly at a selective institution. Earlier Hamilton Project work shows that the net price of college—the price that an average student actually pays after financial aid—is significantly different from the “sticker price” of college. Many students, though, are unaware of the widening gap between the sticker and net price of attendance.

A 2011–12 College Board study found that a majority of students (and an estimated 60 percent of those from low- and middle-income families) ruled out schools based on the sticker price, not the net price, of attendance. In response to these long-standing concerns, the federal government mandated in the 2008 Higher Education Act that colleges and universities introduce a “net-price calculator” to provide prospective students with an estimate of the cost of attending the institution.

In a forthcoming Hamilton Project policy memo, Phil Levine of Wellesley College notes that these net-price calculators are often difficult for prospective students to find and use. He proposes the expansion of a newly developed simplified cost estimator to better inform students about their actual price of earning an education. This improved calculator requires only five pieces of information and provides prospective students with a relatively accurate picture of what they may be expected to pay. Levine proposes expanding the concept of Wellesley’s model, the Quick College Cost Estimator, to other colleges and universities.

More and improved information about the costs of college could eliminate some disincentives to applying to a selective school. However, once accepted, many students will be challenged to obtain student loans to finance or supplement the cost of their education.

In a third forthcoming Hamilton Project paper, Susan Dynarski and Daniel Kreisman of the University of Michigan propose a new system of federal student lending based on an income-based model of repayment. Dynarski and Kreisman find that many individuals struggle to pay their student loans because, under the existing system of federal lending, loans must be repaid within the first ten years after leaving school when workers’ incomes are relatively low and variable. If payments are missed, penalties and fees can accumulate and result in rapidly rising loan balances. Consequently, the current repayment system has turned moderate levels of debt into payment burdens that prevent young workers from attaining economic independence and stability. The authors propose a new system of federal lending, Loans for Educational Opportunity, based a model of income contingent loan repayment, under which payments automatically rise and fall with a borrower’s income.

The returns to higher education are well-documented, particularly in today’s difficult economic climate. However, to many Americans, the financial cost of higher education is, in fact or perception, prohibitive. On October 21st, The Hamilton Project will host a forum focusing on the evolving role of higher education in American society and release the new policy proposals exploring how changes in student lending and financial-aid policies can help improve college outcomes. The authors of the new papers will be joined by leading voices in higher education, including Vassar College President Catherine Bond Hill, University of Texas Chancellor Francisco G. Cigarroa, University of North Carolina President Thomas Ross, Wesleyan University President Michael Roth, and former U.S. Treasury Secretary Robert E. Rubin, among others. For the full agenda and to register for the event, click here. The new papers will be available on The Hamilton Project website (www.hamiltonproject.org) at 10:00 a.m. on October 21st.