The unemployment rate fell to 8.1 percent in August, according to today’s employment report, which is the lowest rate since the onset of the recession. The private sector added more than 100,000 jobs, continuing a steady recovery that has added 4.6 million jobs over the last 30 months. In contrast to previous recoveries, as we discussed in last month’s job posting, public sector employment has continued to decline, which has restrained overall job gains.


As of August, our nation faces a “jobs gap” of 11.3 million jobs. The chart below shows how the jobs gap has evolved since the start of the Great Recession in December 2007, and how long it will take to close under different assumptions of job growth. The solid line shows the net number of jobs lost since the Great Recession began. The broken lines track how long it will take to close the jobs gap under alternative assumptions about the rate of job creation going forward. 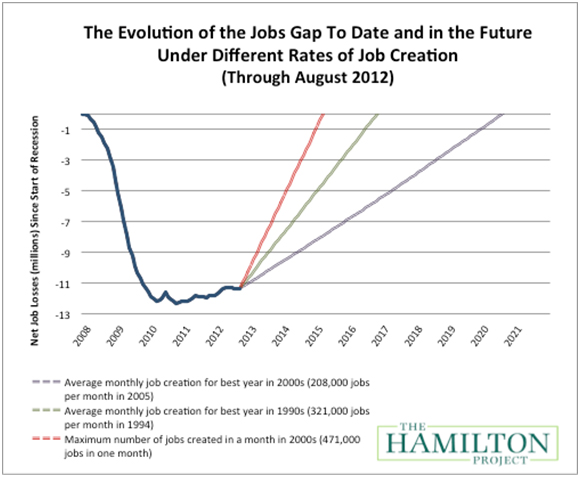