India’s economic upsurge over the past quarter-century or so has been increasingly noted in books and articles and slogans that have gerunds like arriving, emerging, rising, and shining in their titles. With a series of reforms in the 1980s and 1990s, India embarked on a path characterized by rising levels of private investment (including greater foreign investment), a burgeoning presence in the global information technology sector, high growth, and a prospering middle class (see here for a recent review). As the “I” in BRICS, India has become a recognized player in the international economy.

Over the same period, Pakistan has acquired a different reputation. Since the 1980s it has been prominently associated in world headlines with incidents of domestic and international terrorism and strife. This has had an effect on its growth and investment levels. International investors have shown little sign of sustained interest in the Pakistani economy while domestic investors have remained in a low-confidence mode as well. Indeed, private investment rates in Pakistan have fluctuated at around 10 percent of GDP for the past 20 years, while those in India have soared above 20 percent.

So Figure 1 may come as a surprise. It shows how GDP per capita measured in current dollars has moved in India and Pakistan over the last 25 years. This is the metric that is most commonly published and discussed in newspapers and other media and thus is also known as “headline GDP.” Figure 1 suggests that the two countries had similar incomes for most of the last quarter-century until India began to pull away after 2008. 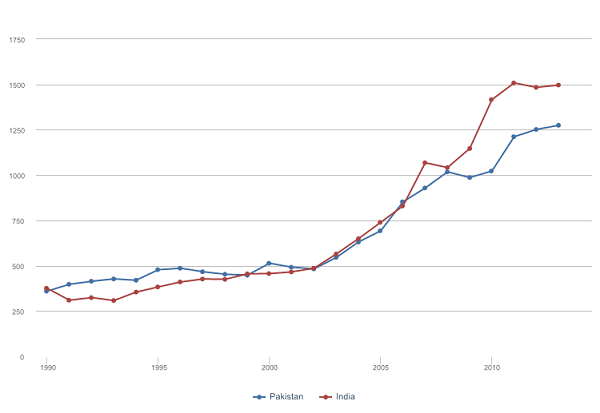 What is wrong with this picture? Why is there no difference in average growth between the two countries between 1990 and 2008 when India is supposed to have been on a reforms and high-investment path and Pakistan on a failed-state path?

One thing that is wrong is the metric used to compare the two countries. International income comparisons are properly done in terms of purchasing power parity (PPP) dollars rather than current dollars. PPP dollars make adjustments for differences in costs due to goods and services whose real prices are not equalized by trade and exchange rate movements and have to be ascertained directly by country-specific surveys. PPP dollars provide a more accurate measure of what people can actually buy with their incomes and are thus a better metric for cross-country comparisons of real standards of living.

When this is done for India and Pakistan a very different picture emerges, one more in accord with the accepted international discourse regarding the recent economic history of the two countries. Figure 2 shows income per capita trends for the two countries since 1990 measured in 2011 PPP dollars (that is, using information from the 2011 round of PPP surveys). 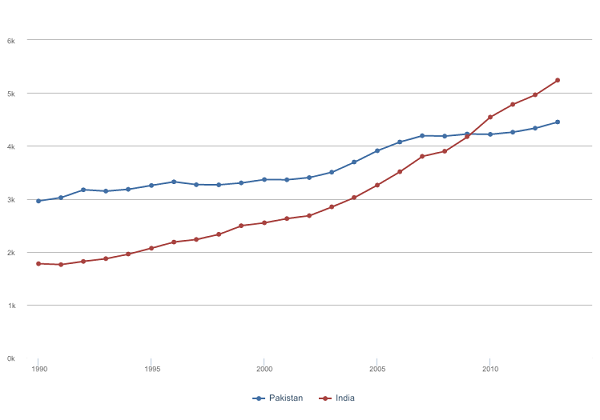 It now appears that Pakistan enjoyed a much higher standard of living in 1990 (roughly 3,000 PPP dollars per capita to India’s 1,850 PPP dollars). But India has been catching up steadily ever since. A crossover occurred in 2009 when India’s income per capita overtook and surpassed Pakistan’s for the first time in recent history.

There are two morals to this story: