So far this year foreign policy and defense issues have been pretty absent from the campaign trail. Will this week finally be the week when the 2014 candidates for Congress finally discover foreign policy?

The New Hampshire Republican Senate candidate, Scott Brown has started running a television commercial critical of President Obama’s handing of foreign policy. In an effort to catch up to incumbent Senator Jeanne Shaheen, he put the following statement on his website, “…instability and uncertainty are rising as a result of President Obama’s weak and indecisive foreign policy.” In addition, there are signs that other candidates are beginning to take advantage of the series of international crises facing the President right now. But will defense and terrorism turn into an actual campaign topic?

Not if the trends from the primary campaigns hold.

On Tuesday, September 30, Brookings’ Center for Effective Public Management will release the results of our six-month long “Primaries Project.” We covered nearly all the candidates who ran in the primaries—the first study of its kind. We wanted to know simply what the core issues in the primaries were, and in our release on Tuesday we’ll sort the candidates by party, by ideology and by their positions on the issues of the day. We’ll look at what they talked about and, just as important, what they didn’t talk about. 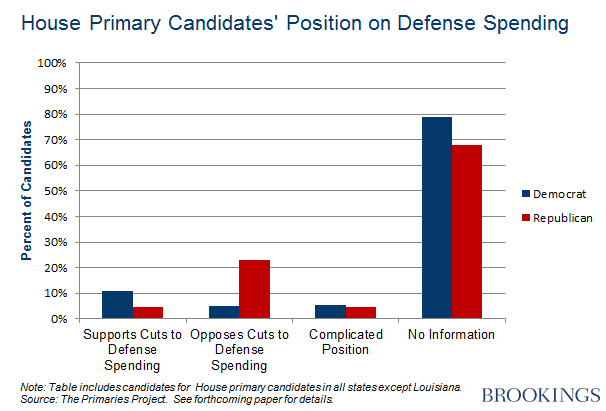 Take another issue related to all of our ongoing conflicts in the world – the extent to which NSA surveillance does or does not violate Americans’ privacy. Going into the primary season we expected this to be a topic of robust debate within each party. And yet, like defense spending, it was virtually ignored in the primaries. Three quarters of all Republican candidates and slightly more than three quarters of all Democratic candidates simply didn’t offer any opinion on the issue at all. Among the Republicans, self-identified libertarian candidates talked about their opposition to NSA surveillance but they were the smallest faction among Republican candidates—and ultimately the least successful in the primaries. 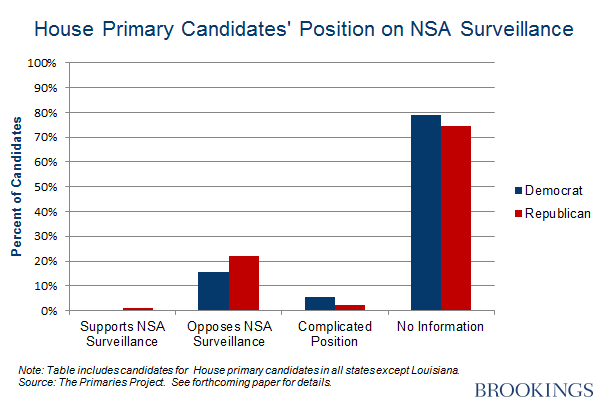 So what’s going on here? For one thing our sample is probably skewed by a number of marginal candidates who don’t seem to be very sure about what the job of Congressman entails. In a companion piece to be released on Tuesday as part of the Primaries Project, journalists Jill Lawrence and Walter Shapiro find that some of the 2014 candidates seemed to think they were running for the state legislature—not Congress. It is also possible that even though the world was in turmoil throughout most of this primary season, the absence of direct U.S. engagement probably allowed candidates to ignore issues that they didn’t want to talk about in the first place.

But in some ways this is to be expected; with the exception of elections where American troops are actually in harm’s way—1968 and 2006 come to mind—foreign policy simply never cuts it—even in elections for President, let alone Congress. Most Americans, including most of those who ran for Congress in 2014, take a wait and see attitude to foreign policy issues. They rally round the President when there’s an emergency or when American troops are sent abroad and then they see if it works out. When it doesn’t, as in 2006 when the unpopularity of the Iraq War finally caught up with the Republicans, the verdict can be swift. That year, Republicans lost big in the midterm elections for Congress. But when the outcome is years away—or unclear—there are simply too many other issues to talk about on the campaign trail.