The 2015 Education Next poll on school reform was released last month. The survey provides deep insight into how Americans view education issues. The data on the declining support for the Common Core state standards are particularly interesting. With this most current release, there are now four years of surveys of public opinion on the national education standards. There appears to be a clear pattern of increasing opposition from both sides of the political aisle.

The national results depict an emerging trend of thawing support for the standards. Support for the Common Core Standards has decreased every year since 2012. For the first time, in 2015, support for the standards declined from a majority to a plurality, and opposition continued to rise. The number of people who do not support the standards has quintupled since 2012, and increased 9 points from last year (26 percent) to this year (35 percent). This growing opposition stems from many diverse sources, which are identified and critiqued by Patrick McGuinn in a recent series of Chalkboard posts. 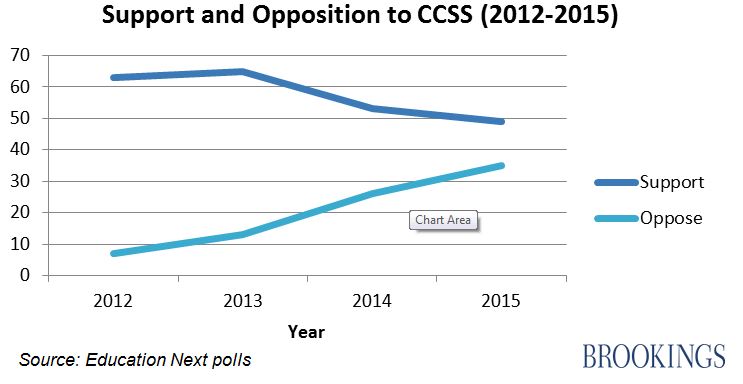 In 2012, 63 percent of both Republicans and Democrats supported the CCSS. Since then, Common Core politics have changed dramatically. From 2012 to 2014, support among Democrats remained at roughly the same level. But this year, support among Democrats dropped six points and opposition increased by eight points. President Obama and numerous other Democratic officials have served as the standards most ardent boosters. If support for the standards continues its decline then the probability of politicians abandoning the national standards project will increase.

The 2015 edition of the poll finds that for the first time, a majority of Republicans oppose the Common Core. Conservative support for the standards continues its precipitous drop. Only 37 percent of Republicans supported the standards in 2015. This was also the first year that GOP opposition (50 percent) exceeded support (37 percent). Presidential politics could also contribute to future decline in opposition among the right. Fringe and middle-tier candidates will likely try to use the issue as a wedge against prominent Common Core supporters like former Florida Governor Jeb Bush. For more on the history and trajectory of conservative politics around the Common Core, see David Whitman’s recent paper, The Surprising Roots of the Common Core: How Conservatives Gave Rise to “Obamacore.” 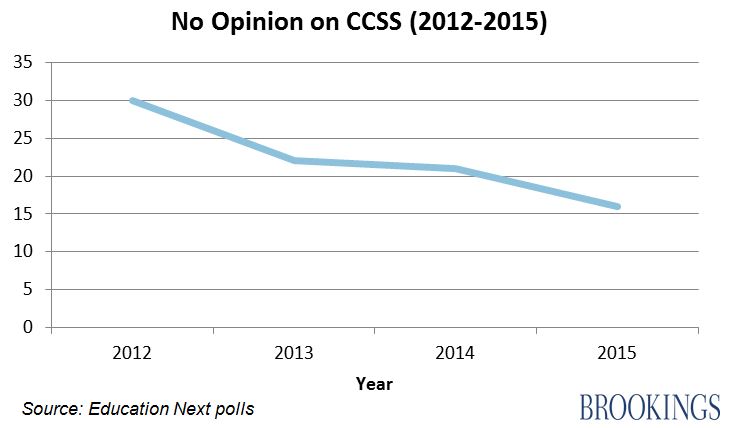 Currently there remains a sizable group of both Republican and Democratic elected officials whose strong support of the standards predates the decline in the Common Core’s popularity. But turnover following the 2016 elections will likely see many of these politicos move to other positions. New leaders who aren’t saddled with a history of supporting the standards may be more responsive to an increasingly toxic political climate. It’s conceivable that if the current trend in the decreasing popularity of the standards continues for the next several months, the political dam could break with major results in Congress and state houses throughout the country.

Do principals hold the key to fixing school discipline?

How resident-led advocacy in Rochester, N.Y. is creating a more playful city