“Strengthening America’s economic security by cementing its economic alliances is not simply an option, but an imperative,” writes Miriam Sapiro in a new policy paper on the economic and strategic rationales of “an ambitious domestic and global trade agenda” for the United States.

In “Why Trade Matters,” Sapiro, a visiting fellow in Global Economy and Development at Brookings and former deputy U.S. Trade Representative from 2009 to 2014, argues that “[w]ith 95 percent of the world’s population living outside of the United States, America cannot recover its economic footing as quickly or as effectively without the ability to deliver on an expansive trade agenda.”

These maps from Sapiro’s report demonstrate important aspects of America’s trade position in the world. Italics are quotes from her report.

“Just as a more open trade policy helped the United States regain its economic footing after the Great Depression, U.S. trade policy today is designed to help America recover from the most serious recession of modern times,” she writes. 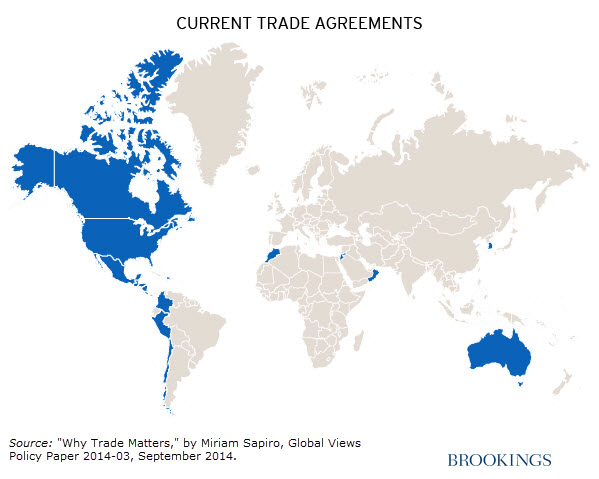 During the past five years, increased exports have been responsible for one-third of U.S. economic growth. Last year U.S. exports of goods and services reached a record high of $2.3 trillion. America’s exports to its 20 free trade agreement (FTA) partners have risen by 57 percent in the past five years, compared to just 44 percent for the rest of the world. Excluding oil, the United States has a trade surplus in goods of more than $15 billion, which has increased 70 percent since 2009,9 in addition to a trade surplus in services of $225 billion. These exports support over 11 million jobs, 1.5 million of which have been created since 2010. U.S. workers are playing a key role in expanding global value chains, which take advantage of advances in U.S. technology and energy independence.

Sapiro calls the Trans-Pacific Partnership (TPP) “the cornerstone of the Obama administration’s economy policy in the Asia-Pacfic region.” 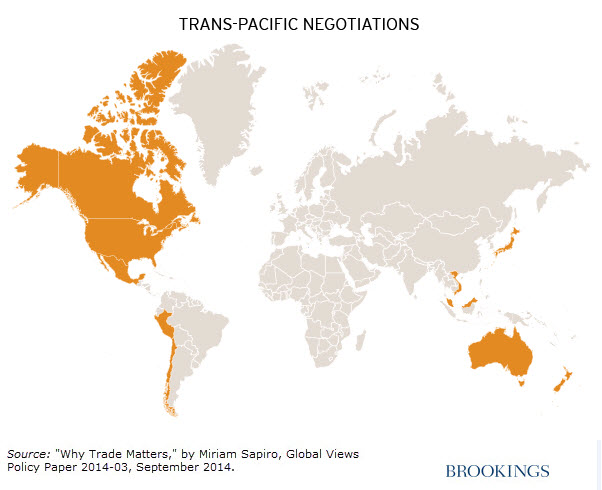 The TPP partners together account for nearly 40 percent of global GDP and one-third of global trade, and span an area of nearly 800 million people. Taken as a whole, TPP countries are America’s largest goods and services export market, valued at $698 billion. With the addition of Canada, Mexico and Japan last year, the group now includes three out of four of America’s largest trading partners, in addition to some of the fastest growing economies in Asia. Today there are 525 million middle-class consumers in Asia, but that number is expected to jump to 2.7 billion by 2030.

“If the United States and the European Union can reach an agreement [on the Transatlantic Trade & Investment Partnership], it will result in greater integration and cooperation within the world’s largest bilateral trade relationship,” Sapiro writes. 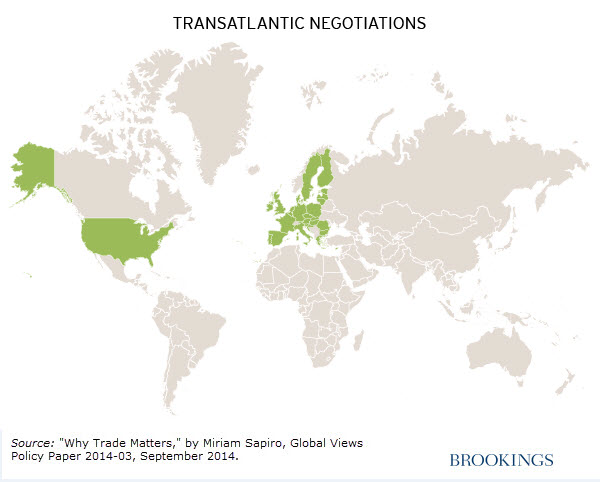 Both economies are responsible for nearly half of global GDP and about one-third of all international trade, and have a combined market of over 800 million people. But notwithstanding the $2.7 billion in goods and services that flow each day and the $4 trillion invested in each other’s economies that support more than 13 million jobs in the United States and the EU, both sides believe their economic relationship has not yet reached its full potential. Indeed, a number of studies have shown that eliminating tariffs and reducing non-tariff barriers to goods and services exports could generate billions of dollars in new exports and thousands of new jobs on both sides of the Atlantic.

“A successful outcome to [TPP and TTIP] negotiations would benefit not only the countries participating directly in them, but also their trading partners,” argues Sapiro. 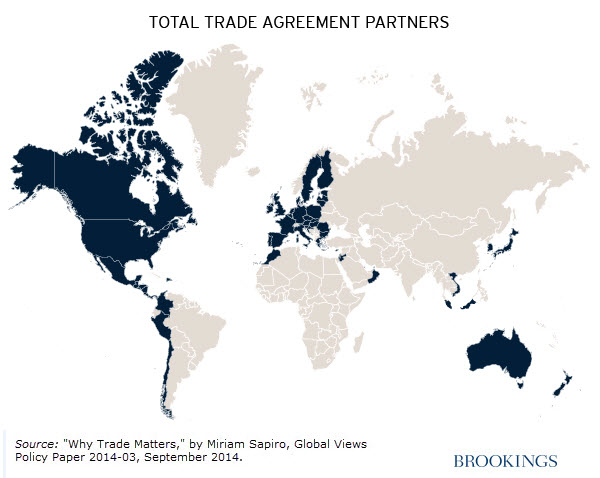 Taken together, the countries participating in TPP and TTIP account for two-thirds of global GDP and half of global trade, and have a combined market of 1.3 billion consumers. Nearly 70 percent of U.S. exports already go to TPP or TTIP partners, and 84 percent of foreign direct investment comes from them. By 2018, TPP and TTIP markets are estimated to grow by $6.7 trillion. At the conclusion of both negotiations, the United States would enjoy liberalized trade with almost two-thirds of the global economy.

A strong nation needs a strong economy that can generate growth, spur innovation and create jobs. This is true, of course, not only for the United States but also for its key partners and the rest of the global trading system. Much as the United States led the way in forging strong military alliances after World War II to discourage a resurgence of militant nationalism in Europe or Asia, now is the time to place equal emphasis on shoring up our collective economic security. A failure to act now could undermine international security and place stability in key regions in further jeopardy.