“Fox News has an acceptance, a popularity it is better to say, among Republicans and conservatives,” said Brookings Senior Fellow E.J. Dionne, Jr. during an event this week to discuss new survey research about Americans’ attitudes toward immigration, foreign policy and the media. “Among liberals and Democrats,” Dionne added, “there is no dominant media source.” The chart below from the survey report demonstrates these findings. 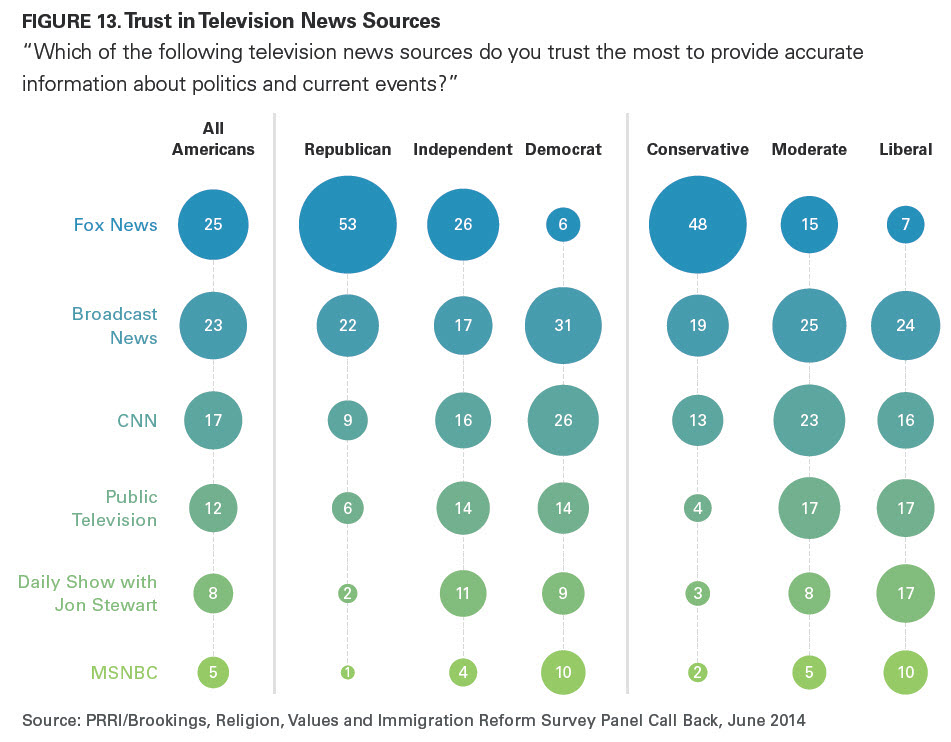 Writing about the data, the authors observe that:

It is not possible from this data to offer a precise solution to the chicken-and-egg question—whether the more important fact is that those with very conservative views are already attracted to Fox, or whether Fox turns its viewers into conservatives. What is clear is that conservatives are drawn to Fox, and that Fox may, in turn, reinforce and perhaps harden conservative views. The survey also suggests that our discussions of political polarization need to take account of the unusually large role Fox News plays among conservatives and Republicans. At the moment, liberals are subject to a wider range of influences than conservatives are. Put another way, conservatives show a greater degree of solidarity, at least where their media habits are concerned. At the same time, divisions within the Republican Party can be defined at least in part by attitudes and habits related to Fox News. This could have important implications for future battles over Republican nominations and arguments over the party’s philosophical identity.

Visit the survey, “What Americans Want from Immigration Reform in 2014: Findings from the PRRI/Brookings Religion, Values, and Immigration Reform Survey, Panel Call Back,” to learn more about the questions, the findings and the authors.