Imagine cities across the globe using technology to manage urban congestion, maximize their energy efficiency, enhance public security, allocate scarce resources based on real time evidence, and educate their citizens through remote learning. This is the “tantalizing prospect” explored in a new report by the Brookings Metropolitan Policy Program and the ESADE Business School in Barcelona, Spain. 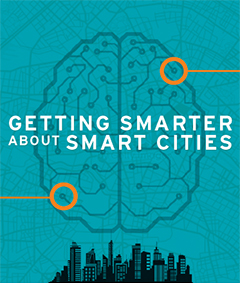 In “Getting Smarter about Smart Cities,” co-authors Adie Tomer and Robert Puentes say that cities, taking initial steps to be “smart,” do not have tangible plans in place to guide implementation of massive, citywide information and communications technologies. And while manufacturers of these products are eager to build what is projected to be a trillion-dollar industry, cities without comprehensive strategies to manage their built environments will not be able to take full advantage of what these products have to offer.

The report describes five steps a city must take to achieve “smart” status:

1. Craft an economic vision that includes a specific role for technology

2. Use technology to promote a healthy economy

3. Include an empowered municipal technology executive

“By 2050, 75% of the world’s population will live in cities,” said Puentes, “putting pressure on city infrastructure that is already stretched to capacity, so there is much at stake. While there are many examples of how cities around the world are beginning to put in place a variety of smart technologies, such as energy-efficient buildings and intelligent transport networks, we still have a long way to go in making smart cities the norm rather than the exception.”

Get more detail on these steps and much more in the report, which is the product of a recent international workshop in which officials from cities throughout Europe, Canada and the United States gathered to discuss how the public sector can contribute to advancing smart cities around the world.