In their new report, “Offshore Oil and Gas Governance in the Arctic: A Leadership Role for the U.S.,” Charles Ebinger, John Banks and Alisa Schackmann examine the current state of oil and gas governance in a rapidly-changing Arctic region and offer recommendations as the United States prepares to assume chairmanship of the Arctic Council in 2015. This map, from the report, shows the location of major resources and potential trade routes in the Arctic: 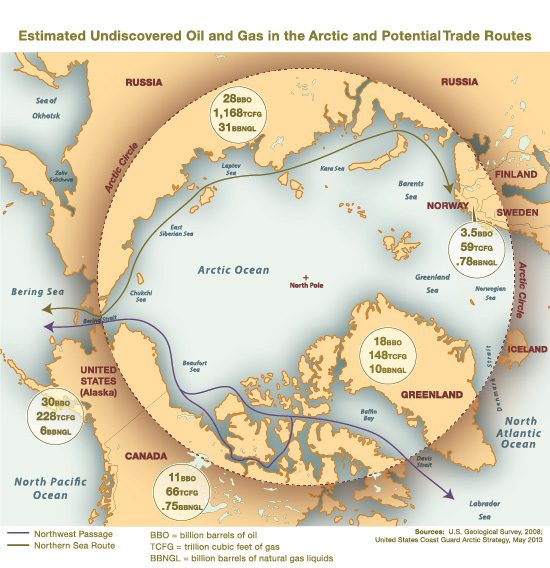 Several factors converged in the mid to late 2000s to spur interest in Arctic offshore hydrocarbon resources. First, as a result of climate change and the retreat of Arctic sea ice, the waters of the region are increasingly open for longer periods of the year for oil and gas exploration as well as the transit of supporting maritime vessels. Estimates indicate that the polar ice cap is now 40 percent smaller than in 1979, and summer sea ice across the Arctic covers half of the area it did in 2000.


Third, strong projected global growth in oil demand and soaring prices peaking at $147 per barrel in July 2008 accelerated interest in new frontier areas. Finally, interest in the Arctic was bolstered by the fact that, despite major technical risks and high costs, most of the region is governed by politically stable states that adhere to the rule of law and the sanctity of contracts. The Arctic thus poses far less political risk than other parts of the world where the growing power of national oil companies either limits access to promising drilling acreage or risks demands for contract revisions once oil and gas is discovered.

The report was launched at a public event today.

The report is accompanied by this video presentation:

Get more Brookings research and commentary on the Arctic.

Time to pivot: The role of the energy transition and investors in forging resilient resource-rich country outcomes