Three of the most important objectives for economic policy are:

Larry Summers’ secular stagnation hypothesis holds that achieving these three goals simultaneously may prove very difficult. (See Larry’s statement of the case and a collection of short pieces on the subject by prominent economists.)

The term “secular stagnation” was coined by Alvin Hansen in his 1938 American Economic Association presidential address, “Economic Progress and Declining Population Growth.” Writing in the latter stages of the Great Depression, Hansen argued that, because of apparent slowdowns in population growth and the pace of technological advance, firms were unlikely to see much reason to invest in new capital goods. He concluded that tepid investment spending, together with subdued consumption by households, would likely prevent the attainment of full employment for many years.

Hansen proved quite wrong, of course, failing to anticipate the postwar economic boom (including both strong population growth—the baby boom—and rapid technological progress). However, Summers thinks that Hansen’s prediction was not wrong, just premature. For a number of reasons—including the contemporary decline in population growth, the reduced capital intensity of our leading industries (think Facebook versus steel-making), and the falling relative prices of capital goods—Larry sees Hansen’s prediction of limited investment in new capital goods and an economy that chronically fails to reach full employment as relevant today. If the returns to capital today are very low, then the real interest rate needed to achieve full employment (the equilibrium real interest rate) will likely also be very low, possibly negative. The recent pattern of slow economic growth, low inflation, and low real interest rates (see below) motivates and is consistent with the secular stagnation hypothesis. 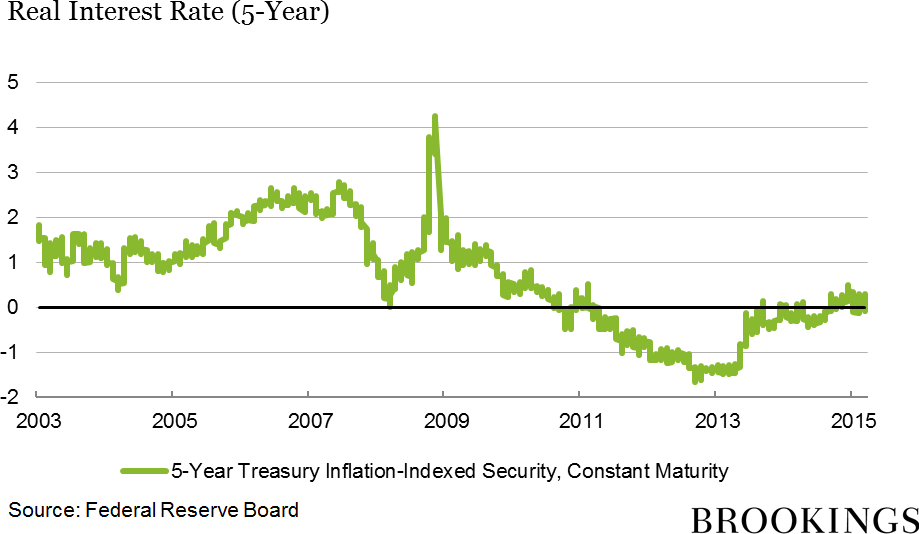 Notice, by the way, that the secular stagnation story is about inadequate aggregate demand, not aggregate supply. Even if the economy’s potential output is growing, the Hansen-Summers hypothesis holds that depressed investment and consumption spending will prevent the economy from reaching that potential, except perhaps when a financial bubble (like the housing bubble of the 2000s) provides an additional push to spending. However, Summers argues that secular stagnation will ultimately reduce aggregate supply as well, as growth in the economy’s productive capacity is restrained by slow rates of capital formation and by the loss of workers’ skills caused by long-term unemployment.

The Fed cannot reduce market (nominal) interest rates below zero, and consequently—assuming it maintains its current 2 percent target for inflation—cannot reduce real interest rates (the market interest rate less inflation) below minus 2 percent. (I’ll ignore here the possibility that monetary tools like quantitative easing or slightly negative official interest rates might allow the Fed to get the real rate a bit below minus 2 percent.) Suppose that, because of secular stagnation, the economy’s equilibrium real interest rate is below minus 2 percent and likely to stay there. Then the Fed alone cannot achieve full employment unless it either (1) raises its inflation target, thereby giving itself room to drive the real interest rate further into negative territory by setting market rates at zero; or (2) accepts the recurrence of financial bubbles as a means of increasing consumer and business spending. It’s in this sense that the three economic goals with which I began—full employment, low inflation, and financial stability—are difficult to achieve simultaneously in an economy afflicted by secular stagnation.

Larry’s proposed solution to this dilemma is to turn to fiscal policy—specifically, to rely on public infrastructure spending to achieve full employment. I agree that increased infrastructure spending would be a good thing in today’s economy. But if we are really in a regime of persistent stagnation, more fiscal spending might not be an entirely satisfactory long-term response either, because the government’s debt is already very large by historical standards and because public investment too will eventually exhibit diminishing returns.

Does the U.S. economy face secular stagnation? I am skeptical, and the sources of my skepticism go beyond the fact that the U.S. economy looks to be well on the way to full employment today. First, as I pointed out as a participant on the IMF panel at which Larry first raised the secular stagnation argument, at real interest rates persistently as low as minus 2 percent it’s hard to imagine that there would be a permanent dearth of profitable investment projects. As Larry’s uncle Paul Samuelson taught me in graduate school at MIT, if the real interest rate were expected to be negative indefinitely, almost any investment is profitable. For example, at a negative (or even zero) interest rate, it would pay to level the Rocky Mountains to save even the small amount of fuel expended by trains and cars that currently must climb steep grades. It’s therefore questionable that the economy’s equilibrium real rate can really be negative for an extended period. (I concede that there are some counterarguments to this point; for example, because of credit risk or uncertainty, firms and households may have to pay positive interest rates to borrow even if the real return to safe assets is negative. Also, Eggertson and Mehrotra (2014) offers a model for how credit constraints can lead to persistent negative returns. Whether these counterarguments are quantitatively plausible remains to be seen.)

Second, I generally agree with the recent critique of secular stagnation by Jim Hamilton, Ethan Harris, Jan Hatzius, and Kenneth West. In particular, they take issue with Larry’s claim that we have never seen full employment during the past several decades without the presence of a financial bubble. They note that the bubble in tech stocks came very late in the boom of the 1990s, and they provide estimates to show that the positive effects of the housing bubble of the 2000’s on consumer demand were largely offset by other special factors, including the negative effects of the sharp increase in world oil prices and the drain on demand created by a trade deficit equal to 6 percent of US output. They argue that recent slow growth is likely due less to secular stagnation than to temporary “headwinds” that are already in the process of dissipating. During my time as Fed chairman I frequently cited the economic headwinds arising from the aftermath of the financial crisis on credit conditions; the slow recovery of housing; and restrictive fiscal policies at both the federal and the state and local levels (for example, see my August and November 2012 speeches.)

My greatest concern about Larry’s formulation, however, is the lack of attention to the international dimension. He focuses on factors affecting domestic capital investment and household spending. All else equal, however, the availability of profitable capital investments anywhere in the world should help defeat secular stagnation at home. The foreign exchange value of the dollar is one channel through which this could work: If US households and firms invest abroad, the resulting outflows of financial capital would be expected to weaken the dollar, which in turn would promote US exports. (For intuition about the link between foreign investment and exports, think of the simple case in which the foreign investment takes the form of exporting, piece by piece, a domestically produced factory for assembly abroad. In that simple case, the foreign investment and the exports are equal and simultaneous.) Increased exports would raise production and employment at home, helping the economy reach full employment. In short, in an open economy, secular stagnation requires that the returns to capital investment be permanently low everywhere, not just in the home economy. Of course, all else is not equal; financial capital does not flow as freely across borders as within countries, for example. But this line of thought opens up interesting alternatives to the secular stagnation hypothesis, as I’ll elaborate in my next post.