PART I: The Sequestration Situation

Editor’s Note: This article appeared in a five-part series for
Time Magazine’s Battleland blog. A version of the article was presented at a private event at Brookings organized by the
Center for Northeast Asian Policy Studies and the 21st Century Defense Initiative. The article is also available in Korean.

In recent months, concerns over sequestration and its impact on the U.S. military have reached a fever pitch in Washington.

Sequestration “would destroy the military” and cause an “inability to defend the nation” argued Senator John McCain, ranking member of the Senate Armed Services committee.[1] “Cuts of this magnitude would be catastrophic to the military,” testified General Raymond Odierno, the Chief of Staff of the U.S. Army, to Congress.  “From a pure national security perspective, the gap between the U.S. military and our closest rivals will collapse with sequestration,” wrote the Washington Times. [2] And it would create a U.S. military akin to a “paper tiger…unable to keep up with potential adversaries,” said Secretary of Defense Leon Panetta. “In effect, it invites aggression.”[3]

There is no doubt that sequestration would be a terrible mistake. If Congress is unable to reach a compromise on how to solve America’s debt dilemma, almost half a trillion dollars in mandatory cuts to the defense budget over the next decade would initiate in January (meaning roughly $55 billion in the first year). It is un-strategic to hack away at the defense budget in a generalized manner, cutting the good and the bad by the same percentage, like a butcher with a piece of meat.

Unfortunately, in the effort to fight this scenario with hyperbole, we may be doing a different kind of disservice to U.S. security. While the screams of outrage over sequestration are directed at a domestic American audience, they resonate around the world. Words do matter, especially those said in the capital of the free world about how it sees its own ability to maintain that role. We do know that America’s allies are certainly listening to these statements. For example, at an August 2012 engagement with high level South Korean defense leaders and experts, organized by Brookings and KIDA, the Korean Institute for Defense Analysis, a senior Korean leader said “We hear these statements and have deep, deep concern about what it means for us.” In turn, we don’t know how such predictions of doom and gloom by American leaders are received in capitals like Pyongyang. But one can reasonably conclude that if you don’t want to “invite aggression” then the best tactic is not to go about screaming to the world that you expect to be weak and “toothless.”

So what we have today is the combination of high stakes, hysteria and the kind of complex issue that too often only policy wonks love to dive into. Indeed, the very word “sequestration” itself seems almost designed to make it hard to understand (it actually comes from an old Latin term meaning to seize the property of someone for the benefit of paying off their debtors or the state).

The following article is an attempt to demystify what sequestration might really mean for U.S. military spending and power. Instead of the typical Washington, DC discussion of sequestration, which has so far largely been focused on questions of jobs and elections, it tries to take the long view. First, we will look at the background of how we got here and the actual drivers behind the looming budget cuts. Then, we’ll place it all into context, looking at what sequestration might mean to U.S. military spending compared to the world in general. Then, we’ll explore a bit deeper its potential impact on East Asian military spending levels, checking out what it means for one of the most important regions in the world and the new area of American military “pivot.” And finally, we’ll examine just how sequestration might play out in an area where there is perhaps the deepest concern about the impact of potential sequestration, the flashpoint of the Korean peninsula.

Segye Choigang is a common term in Korean used to describe the U.S. military.  It means “second to none” or “best in the world.” Will that remain the case, if sequestration really were to occur?

Trillion as in T: How We Got Here and What It Means for the Budget

No discussion of sequestration can begin without first looking at the financial situation that got America into this predicament. In the words of leaders who range from the Chairman of the Joint Chiefs to the Secretary of State, the United States faces a “national security crisis” when it comes to our economic security situation. The U.S. debt presently stands at $16 trillion and growing.

What makes the problem worse is the poor track record that both political parties have at shrinking this debt. Over the last 50 years, the U.S. has only run a budget surplus five total years.

This figure is all the more alarming given that the national debt now exceeds America’s gross domestic product. If action is not taken to rein it in, the Congressional Budget Office (CBO) estimated that in 2050 the U.S. gross debt could reach over three times the size of our GDP, which means the U.S. balance sheet looks less like a superpower and more like Greece.

Sixteen TRILLION dollars. Sixteen million million. 16,000,000,000,000. The scale of such numbers dominate any budget discussion not only today, but for the next decade at least. Indeed, the numbers are so astronomical that they lose their meaning. A trillion might as well be a gagazillion or a bodonkajillion. So, perhaps it is useful to imagine what could be bought if somehow the U.S. were to receive a $16 trillion check in the mail. What could America roughly buy with the amount it now owes in debt?

The good news of the recent political crisis over debt and sequestration is that America’s political leaders are finally taking seriously the degree of this problem. For too long, the building mountain of American debt was put in the category of those many problems to deal with “in the long run,” which meant we didn’t deal with it. For prior generations, it was a problem for their grandchildren, then their children’s problem, etc. Now that $16 trillion of debt is our inheritance, we can pass it on no further.

The bad news is how politicians have dealt with this problem, almost exclusively focusing on budget cuts rather than the fundamental drivers of debt growth.

First came the self-inflicted wound of Congress delaying on extending the debt ceiling in Fall 2011, which prompted a downgrading of the U.S.’s bond rating. When they finally did extend it, the literally last minute deal came with conditions, what is known as the Budget Control Act of 2011, that created the current sequestration predicament. This law entailed a first wave of over $400 billion in cuts to U.S. security spending and the creation of a “super-committee” of representatives from both parties in Congress that was tasked with finding a set of reforms that would reverse the debt growth. If no agreement could be reached, the mandatory cuts of sequestration would then kick in at the start of 2013, lopping off $1.2 trillion more in cuts, split between national security and domestic programs. The concept was that the threat of the mandatory cuts would force the two sides to find a way to compromise over the coming year and put together a package of both entitlement and tax reform that poll after poll has found the majority of the American people support.

Unfortunately, the super-committee proved anything but and failed to come to any agreement. Thus, with the clock ticking away, the only thing standing between the budget and the swinging axe of sequestration is the slim chance that the rest of the Congress will show the maturity and ability to compromise that its designated representatives on the super-committee lacked.

The hyper-partisan climate, the diminished power of political party leaders over their constituencies, and the context of an election year makes the challenge of Congress coming together all the more difficult. Hopefully, Congress will buck expectations and come to an agreement. Many believe that this will most likely occur during the “lame duck” session after the fall election. This is a dangerous gamble, as it sets a weighty decision for the last minute and puts the goal of reaching cooperation immediately in the wake of an uncertain election outcome.  So, while sequestration is certainly not a positive outcome, it is a potential contingency whose impact should be evaluated.

What many commentators ignore, however, is that the potential scenarios for the future are not either sequestration or zero additional cuts. Indeed, it is highly possible and even probable that the hoped for compromise deal that averts sequestration still will have additional defense cuts of significant scale included in them.  For instance, the proposed deals that the super-committee was debating, but unable to execute on, would likely be the starting point of any “lame duck” discussions. These negotiations had additional defense cuts contemplated in the $200 to $300 billion range.

The essential point here is that the U.S. defense budget is most likely headed for cuts of significant scale. This likelihood is not just a matter of sequestration, but again reflects the overall debt problem (indeed, sequestration will only reach a fraction of the debt reduction needed, another reason to avoid it, as it doesn’t solve the problem and instead would have to be returned to again and again). It also reflects the historic pattern U.S. defense budgets have followed for some 60 years.

What is notable about looking at the historic defense budget is that it shows both the significance and novelty of defense cuts to the current generation, who have seen only growth for the last decade. But it also shows the limits of the various looming cuts scenarios, as compared to past post-war drawdowns. The reductions even under the worst case situation of sequestration would take U.S. defense spending not to the bottom of the historic trough but the rough average of overall spending.

Where these cuts become more significant perhaps, however, is putting them in comparison to the broader American economy. In the past context of both a Cold War and a smaller U.S. economy, a greater percentage of the GDP was spent on defense than now. 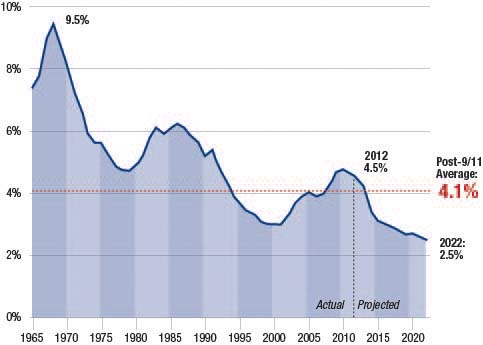 [7] U.S. Air Force,  March 17, 2012. Totals include all war and enacted supplemental funding and do not include Department of Energy national security spending.