Editor’s Note: This article appeared in a five-part series for

. The article is also

The U.S. may have global power and responsibilities, but in recent years, a strategic shift has occurred. China’s military has risen in conjunction with its driving economy, which has prompted a refocus on Asia and a “pivot” or “rebalance” in American grand strategy. Thus, while we explored in previous sections the drivers of sequestration and what it might do to the U.S. defense budget in comparison to world military spending, that would miss a major part of the story. One should also put U.S. military spending not just in a global context but a regional one. 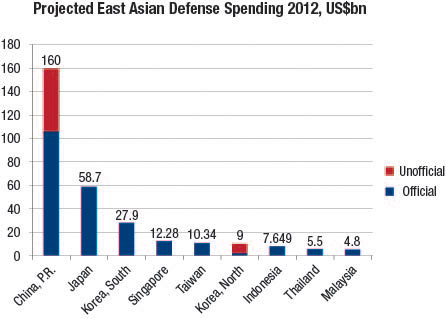 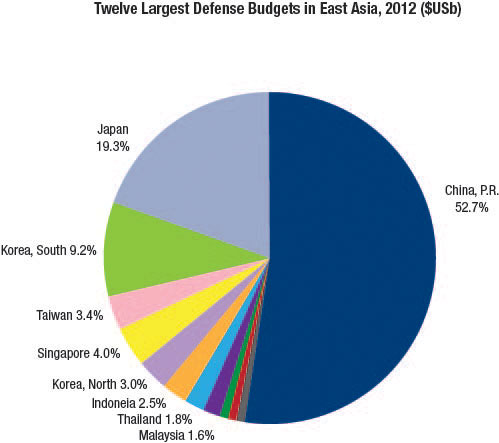 However, here again, the numbers take on a far different interpretation when you include the true Asian superpower, the United States, in the context. 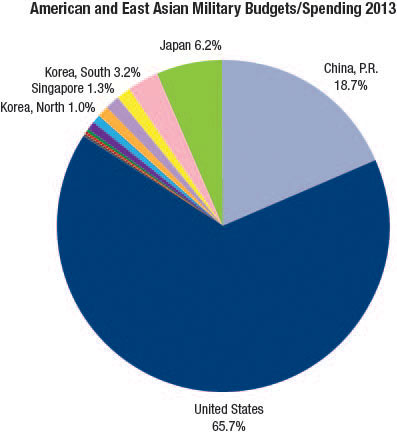 If sequestration were to occur, the U.S. slice of the pie gets smaller, but would still be a dominant slice, even more so if one includes its allies in the weighting. 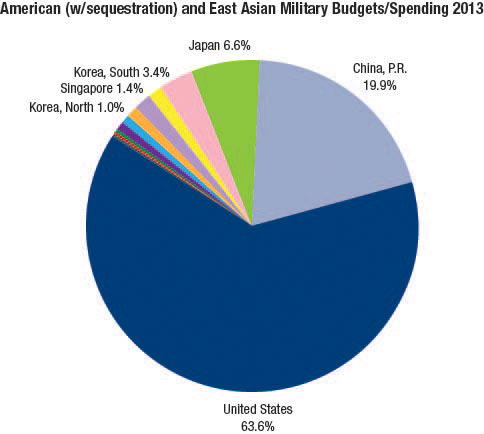 Of course, the U.S. has global responsibilities, and so these figures should not be taken as the end of the story. Akin to the German naval position versus the British prior to World War I, a rising regional power like China might present a larger threat than any straight comparison of their relative numbers. A global power like the British back then or the U.S. today can be spread too thin, while the regional power’s resources are all focused (so the British during this period used variations on the “two power standard” as their guide to naval force size, ensuring a fleet larger than the two next powers combined). Of course, in turn, the global power can still bring these other resources to bear in regional scenarios whenever the situation grows important, and that local power is also counterbalanced by the other allies within the region, who see its growth as a threat.

Military spending as compared to GDP shows similar weights. Other than North Korea, which has the dark combination of being a garrison state with a withered economy, the U.S. percentages still rank high regardless of the scenario. Even in the worst scenario of sequestration, the U.S. is still at 3.45% of GDP, a full point higher than China at 2.36% of its smaller but rapidly growing economy. 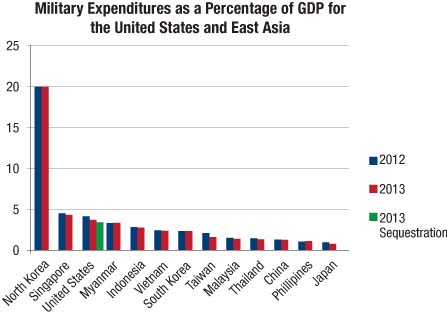 
[14] “The Conventional Military Balance on the Korean Peninsula,” International Institute for Strategic Studies, 2012,  http://www.iiss.org/publications/strategic-dossiers/north-korean-dossier/north-koreas-weapons-programmes-a-net-asses/the-conventional-military-balance-on-the-kore/. Based on estimates of 25-33% of total GDP, which is currently projected at approximately $40 billion.

“Indonesia and Philippines to Increase Spending on Defense in 2013,” Defense Studies, July 25, 2012,  http://defense-studies.blogspot.com/2012/07/indonesia-and-philippines-to-increase.html