The Hamilton Project’s mission is advancing opportunity, prosperity, and growth. Promoting a strong and innovative education sector is at the core of this mission. Access to high-quality education enables Americans to gain the knowledge and skills needed to achieve in the classroom and succeed in the workforce. Yet, the education system has fallen short of providing high-quality educational opportunities to all students and so the goals of the education sector are not being met. Within the United States there is stagnating student achievement on standardized test scores and slow growth in degree attainment as well as large gaps between advantaged and disadvantaged students on measures of student achievement and degree attainment.

In the past 25 years the idea of charter schools as a means for public education system innovation has emerged from a wide variety of sources. In 1988 the president of the American Federation of Teachers, Albert Shanker, spoke in support of a mechanism that would give teachers the ability to submit a proposal to create a new publicly funded school that was free of certain regulatory constraints in order to try innovative approaches to teaching and test their impacts. In 1990 the Brookings Institution published John Chubb and Terry Moe’s Politics, Markets, and America’s Schools. This book recommended rebuilding the American education system based on principles of market competition and deregulation, and suggested that, through parental choice and school autonomy, student achievement would improve.

Beginning in the 1990s with Minnesota, states started to pass laws to allow the establishment of publicly funded charter schools. In general, charter schools receive public funding the way traditional public schools do, but operate independently of local school boards or superintendents. Charter schools have used this autonomy in a variety of ways to structure their schools and classrooms innovatively. As Roland Fryer discusses in a Hamilton Project policy proposal, such practices include changing human resource practices, making instruction data driven, developing intensive tutoring programs, increasing the amount of time spent in the classroom, and setting high expectations.1 The second leg of charter school policy is the market hypothesis: providing access to charter schools will improve education through competition. The result of competition may be that all schools—charter and regular public schools alike—will improve because they face an increased threat of losing enrollment if they do not perform adequately. For charter schools to encourage school choice and competition, students must have reasonable access to them. 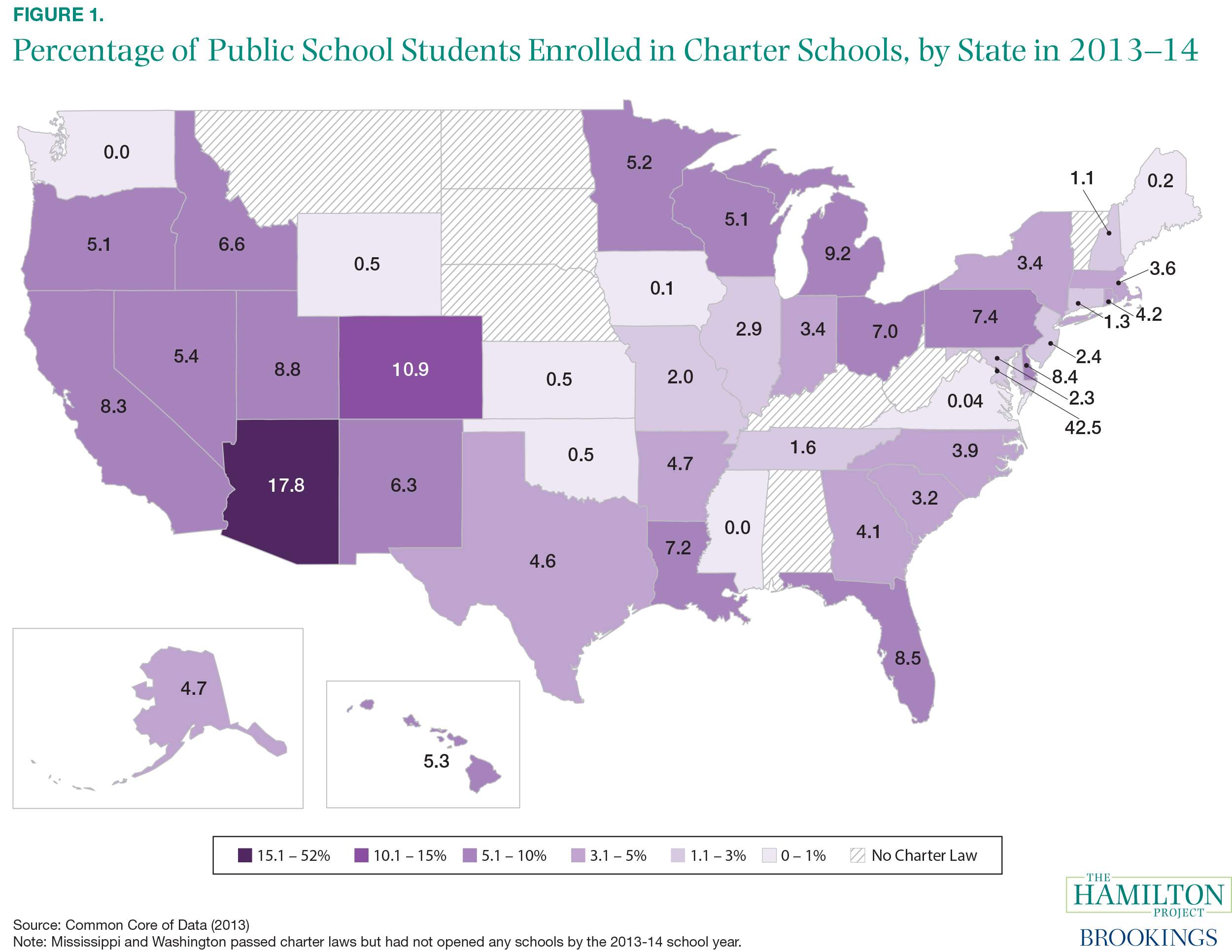 4 The District of Columbia has 43 percent of students enrolled in charter schools, but is not a state.