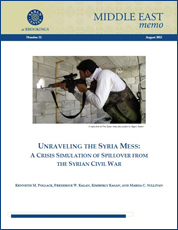 The Saban Center for Middle East Policy joined with the American Enterprise Institute and the Institute for the Study of War in June 2012 to host a one-day crisis simulation that explored the implications of spillover from the ongoing violence in Syria. The simulation examined how the United States and its allies might address worsening instability in Lebanon, Iraq, Jordan, Turkey, and elsewhere in the Middle East as a result of the internecine conflict in Syria.

Among the key findings:

The simulation suggested a tension between U.S. political antipathy toward greater involvement in Syria and the potential strategic desirability of early action.

President and Founder, Institute for the Study of War