The high costs of COVID-19 are evident in lost jobs, dramatic falls in GDP growth, compromised schooling, shuttered restaurants, and much more. Some of these losses will be recovered over time, some will not. The human costs of the pandemic—above and beyond the gruesome death toll—are much more difficult to assess.

Our analyses suggest that the emotional costs of the pandemic are much higher for the poor and vulnerable than they are for the rich, heightening deep pre-existing inequities in well-being in the U.S and many other countries.1 Before COVID-19, our data discovered remarkable progress paradoxes in rapidly growing middle-income countries.2 In the late 1990s in China, life satisfaction fell more than 20 percent and mental health reports and suicides increased sharply at the height of their rapid growth, due to increases in inequality and uncertainty associated with change, as well as increasing gaps between the winners and losers in the process. In the past decade in India—in which both growth and poverty reduction have been exceptionally high—both life satisfaction and reported optimism fell over 10 percent, for similar reasons.

In the U.S., pre-COVID-19, when stock markets were booming and the official unemployment was at record lows, deaths of despair—due to opioids and suicides—took over 1 million lives in just over a decade. These were concentrated among less than college educated middle aged whites—a privileged group when manufacturing jobs were plentiful, but then experienced declines in income and social cohesion as those jobs disappeared. Pockets of deep vulnerability—and ill-being—persisted and even deepened in the decade of steady growth following the financial crisis.

The pandemic has highlighted how economic growth alone is not enough to sustain economies and societies.

Since COVID-19, these trends and other pre-existing inequities have been exacerbated and are reflected in deep declines in reported well-being.3 A survey in March highlights the differences in the costs to well-being across the rich and poor.4 Low-income respondents significantly reported more negative emotions than did high income ones, including more worry, sadness, loneliness, and anger.

There were also significant increases in negative emotions relative to earlier years for all income groups. Our comparisons are imperfect, given that they are based on similar but not the same samples: the Gallup panel for March 2020 versus the 2017 Gallup daily poll, although for the same income groups. The differences are stark. The average in 2017 for reported stress and worry for the low-income respondents was greater than for high income ones (Figure 10.1). There is a clear increase in March 2020 for both groups (for example, 64 percent worry for low-income groups versus 41 percent in 2017). 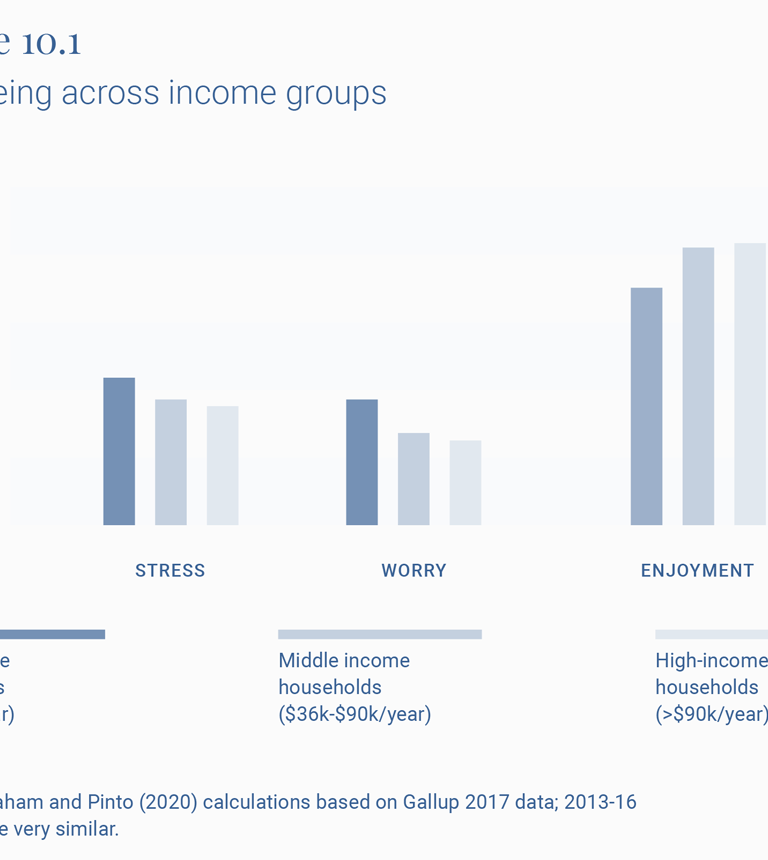 There is evidence of spillover effects of COVID-19 among populations already vulnerable to deaths of despair. While most of these populations tend to be rural and less likely to have high COVID-19 incidence than metropolitan ones, the economic costs and uncertainty associated with the pandemic still affect them. Incidence in rural areas, meanwhile, has spiked significantly in the fall of 2020.

The National EMS Information System (NEMSIS) provides first responder data for 46 million respondents from 2017-2020.5 In March-July of 2020 compared to the same period for 2019 and 2018, there was a sharp increase in calls activated by drug overdoses and deaths, mental and behavioral issues, and the need for naloxone, and in refusals to go to the hospitals by overdose victims.6 While the NEMSIS data only covers a fraction of actual deaths, it is collected in real time, allowing us to follow changing trends. EMS calls for opioid-related activities, for example, increased from roughly 2,000 per week in February and March 2019 to almost 5,000 per week in the same time period for 2020. Calls for mental and behavioral problems increased from just under 35,000 per week in the same time period for 2019 to almost 45,000 per week in 2020.

Other kinds of EMS calls—such as for traffic and other accidents decreased in 2020—due to the lower volume of activity during lockdown, while cardiac arrest and respiratory problem calls increased. Suicide calls are only slightly higher than earlier years, but there are worrisome signs, such as sharp increases in gun sales (guns are responsible for most successful suicides). Before the crisis, a 2017 study estimated that a 1 percent increase in county level unemployment resulted in a 3 percent increase in drug related deaths.7 While an employment shock of this magnitude makes it impossible to impose a similar projection, it is hard to imagine a positive scenario.

The impact of COVID-19 was similar across many rich countries. Yet the characteristics of vulnerable groups differ, and the trends were less likely to be associated with deaths of despair as they are in the U.S. In the U.K., for example, Asians, Muslims, and other minorities report disproportionately high levels of anxiety8 compared to whites during COVID-19. The same study found that mental health and loneliness appear to have worsened, with these same minorities—and young adults and people with low incomes—disproportionately at risk. Those who are particularly vulnerable, due to losing a job, having difficulty accessing food, or unable to pay bills, not only have the worst objective experiences, but suffer additional negative effects on mental health due to high levels of worry. Poor mental health is negatively related to compliance with government guidelines during the pandemic.

The death toll in poor countries—and among the poor within them—is typically much higher than in rich countries. Yet we do not have recent data to assess COVID-19-related declines in well-being and mental health there. Given extensive poverty and greater difficulty associated with social distancing, it is difficult to imagine an absence of negative effects.

Anecdotal evidence for India, meanwhile, suggests increases in rural suicides. India instituted one of the world’s strictest lockdowns amidst high rates of poverty. Perhaps because of that, it still had one of the worst results worldwide controlling the virus. Lockdowns resulted in millions of more Indians entering poverty and exacerbated one of the highest suicide rates in the world.9 The additional numbers of suicides are estimated to be well into the thousands. Farmers, unable to take their products to market and to employ rural labor to field their crops during lockdown, were particularly vulnerable. A country with already low levels of well-being and high levels of vulnerability now displays the worst manifestations of the virus on public health and the economy, as on mental health.

Our analyses suggest that the emotional costs of the pandemic are much higher for the poor and vulnerable than they are for the rich, heightening deep pre-existing inequities in well-being in the US and many other countries.

Well-being measurement gives us a lens into the emotional and mental health costs associated with the pandemic and some strategies to resolve it. It allows us to assess how trends in life satisfaction, hope, anxiety, and depression compare for the same population groups pre- and post-COVID-19.

Well-being data reflect actual trends and can be predictive of future behaviors. We find that ill-being markers—such as despair and stress—are strongly associated with the probability of dying from deaths of despair (both for individuals and places).10 The increases in despair preceded the increase in deaths by two decades, suggesting a possible predictive role.11 We are now using the metrics as warning indicators of overdoses, suicides, and other despair related deaths.12 As such, they provide us with a means to take societies’ temperature during good times and bad, and certainly during this public health crisis.

A recent study of the well-being effects of lockdowns in Australia, New Zealand, and South Africa used Twitter data13 to find that reported average daily happiness fell on average by 16 percent compared to the previous year. The daily happiness measure was strongly and negatively correlated with reported depression and anxiety. The drops were starkest in South Africa, which has much more poverty and implemented the most severe lockdown of the three, including a ban on sales of alcohol and outdoor exercise. While the average pre- to post-lockdown happiness drop was a full point on the 0-10 happiness scale in New Zealand and Australia, it was 1.5 points in South Africa, suggesting that the nature and details of lockdown policies also matter a great deal.

The U.K. government’s efforts to combat loneliness, led by Lord Richard Layard, as well as the OECD guidelines on using well-being to inform recovery efforts, highlight the need to identify pre-existing vulnerabilities to target support, to emphasize new areas not previously on the governments’ radar screen, such as isolation, and to work to build resilience within systems, such as supporting social capital and public trust. The 2010 Marmot Review has also been updated to include investing in early childhood development to combat the costs of not being in school, improving working conditions for front-line workers, supporting better job training efforts and a living wage, and re-thinking healthy and sustainable places for people to live and work, not least as the pandemic has changed the nature of work for so many. Well-being data show that autonomy and purpose at work matter more to workers’ well-being and productivity, for example, than do salary increases, an insight which can inform future labor market policies.

Despite these high levels of human suffering, there are also some surprisingly positive trends. Surveys find that, on average, humans are remarkably resilient and can face a wide range of challenges—from poverty to crime to health problems—and return to their initial high levels of well-being. As such, it is no surprise that in the countries for which we do have data, such as the U.S., the U.K., Ireland, and Sweden, average levels of well-being trended back upward to near pre-COVID-19 trends as soon as the lockdowns and the uncertainty surrounding them subsided.14 Within the U.S., groups that are traditionally resilient in well-being terms, such as poor Blacks and Hispanics, display it during the pandemic. While these same groups are much more likely to contract and/or die from COVID-19,15 they also report better mental health and more optimism for the future than whites during the pandemic. Low-income Blacks have higher levels of optimism than other low-income groups, and they also experienced less of a decline during COVID-19.

Still, the pandemic has highlighted how economic growth alone is not enough to sustain economies and societies. In the absence of a more comprehensive approach, which supports societies’ health and well-being in addition to growth, we will remain very vulnerable to the next pandemic, as well as future waves of this one. It has also emphasized how infectious diseases cross borders within and across countries, and that ignoring the well-being of the poor and the vulnerable has broad costs within and beyond national borders.

The complexity of managing COVID-19: How important is good governance?

Sustainable Development Goals: How can they be a handrail for recovery?

Well-being metrics give policymakers a tool to attach relative values to things like lost jobs, lack of health insurance, and insecurity. Many countries have adopted a well-being approach in their policies, most notably New Zealand, which is also one of the world’s leaders in virtually eliminating COVID-19. And, as we have written earlier,16 New Zealand also has exceptionally high levels of public trust compared to those countries that have fared poorly in controlling the pandemic—such as the U.S. and India. Incorporating well-being into economic models and policy priorities would surely leave many other countries better prepared to handle crises in which the solutions hinge on public health systems and norms of public trust and cooperation.